MANILA, Philippines – Earth finally has its highest-resolution planetary photo ever.

On Wednesday, January 25, NASA has released the “most amazing high definition image” of Earth ever – an 8000×8000-pixel ‘headshot,’ if you can call it as such.

NASA said the image was a composite of images taken of our planet on January 4, 2012, and shows a large part of North America, the Gulf of Mexico, and the eastern Pacific Ocean.

The images were taken from the Visible/Infrared Imager/Radiometer Suite (VIIRS) instrument aboard the Suomi National Polar-Orbiting Partnership (NPP) satellite.

The newest Earth-observing satellite, according to NASA, is the first of a new generation of satellites that will “observe many facets of our changing Earth.”

It was named after Verner E. Suomi, who was a meteorologist at the University of Wisconsin and acknowledged ast “the father of satellite meteorology.”

Tech site Gizmodo said the 2012 “Blue Marble” image “bests the 2010 edition” – a mainstay in iPhones‘ default images folder – and the original one, taken during the Apollo 17 mission in 1972 (see below). 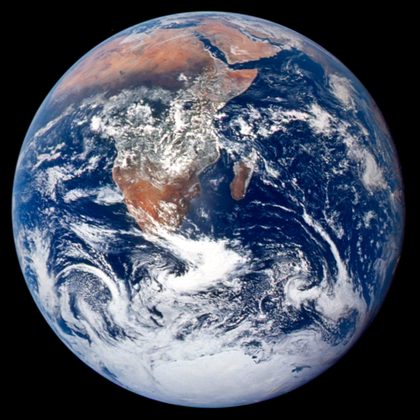 You can download the image (all 16 MB of it, or in a smaller size) at the NASA Goddard Photo and Video page on Flickr.

For more dazzling images taken from space, NASA has several repositories available online, such as the Earth Observatory. – Rappler.com