Sandboarding, Laoag, and a bashing adventure

Jan 30, 2012 10:07 AM PHT
Tina Tan
Facebook Twitter Copy URL
Copied
The Laoag La Paz sandboarding competition is the first of its kind in the country

LAOAG CITY, Philippines – I was about 10 years old when I first climbed Bantay Bimmaboy in sleepy Barangay La Paz. Those were the days when World War II US Army jeeps aka Willy’s M38s were the only vehicles that could take you to the foot of the great sand dunes of Laoag.

That day of my childhood years mirrors in my mind every chance we get to visit the dunes for an energizing dune bashing adventure. The astonishing view of the vast mounds of sands greeting the gleaming turquoise waters of the South China Sea is filmworthy that is why foreign and local productions have chosen the Ilocos sands as location for shoots.

I read that Tom Cruise still remembers Laoag City after filming Born on the Fourth of July. Up to this date, the local Panday series have not yet found a new alternative location.

Last week, I brought two UP-AIT Tourism students to La Paz to see for themselves the distinct beauty of the La Paz sand dunes. We were still on the onset, I could already hear their excitement from the front seat. I reminded them to just scream it out as we managed our way to a peak.

I let them try sandboarding, a sport that my independent group, the Laoag Eco-Adventure Development (LEAD) Movement, innovated in August 2009 to help boost tourism in the province. The two students were in Ilocos primarily to research for their thesis about film-induced tourism. Being a stakeholder in tourism, my group was asked for our specific goals and role.

I told them that we just wanted to help promote our beautiful hometown, help empower the locals and influence them to take care of our natural inheritance.

The trickle-down benefit of tourism is also part of why we created something unique like the sand adventure activities, which we Ilocanos are getting to appreciate more. Sometimes, we wake up and be cognizant of  certain things only when we hear others rave about what we have that they don’t have.

Angela and Amadeus played like pros after three or four  attempts on a sandboard. The sun was about to sleep, the colors of the earth was at its most gorgeous. My two visitors seemed exhilarated as we descended the slope for a return trip to the heart of the Laoag. – Rappler.com 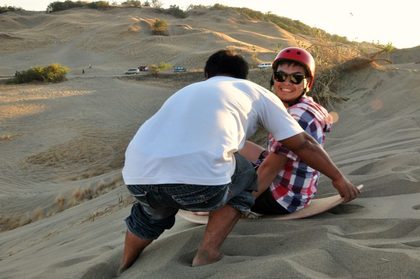 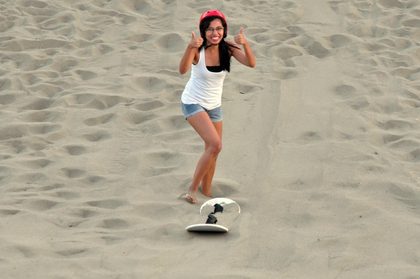 (For more on Laoag and Ilocos Norte, visit the author’s blog, www.blauearth.com. The Laoag La Paz Sandboarding Competition, to be held on Feb. 11, 2012, at 1 pm,  is the first of its kind in the Philippines. It’s presented by the LEAD Movement, “the innovators of sandboarding in Ilocos” and Havaianas® in cooperation with the City Government of Laoag for the annual Pamulinawen Festival. It’s when wholesome, active FUN meets breezy, exuberant FASHION! Havaianas kits will be given away to the first 50 registrants. Free registration. For inquiries and details check out the Ilocos Sand Boarding page on Facebook or contact LEAD Movement or Red Dot.)

Click on the links below for more travel stories.