Stella Araneta on Miss U:’ I’m Colombian but I would choose Philippines’ 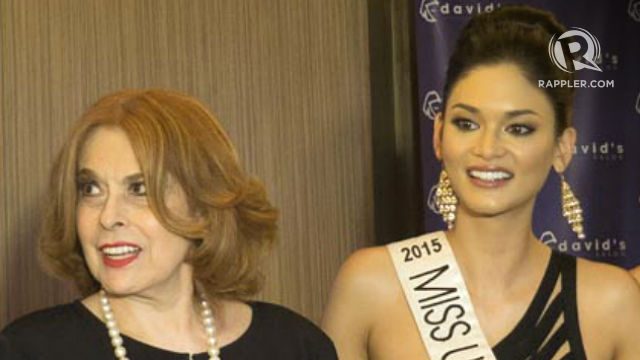 Facebook Twitter Copy URL
Copied
The former beauty queen says she has poured her 'heart and soul' into Bb Pilipinas, which she has chaired since 1964

MANILA, Philippines – Binibining Pilipinas chairperson Stella Araneta expressed her joy over the triumph of Pia Wurtzbach, who won the Miss Universe crown after a 42-year drought for the Philippines.

In an intervew on TV Patrol, Wednesday, December 30, Stella said that all the training paid off after she saw Pia – who clinched the Bb Pilipinas Miss Universe title on her third try – walk away with the crown in Las Vegas last December 20.

Stella also congratulated the Filipinos for the win.

“Congratulations to all the Filipino people, not only here in the Philippines but around the world. It has taken so many years but we are lucky that we had a candidate this year that was ready to win,” she said.

“She was learning constantly what to do and perfect her way of presenting herself. I noticed [that] she would be observing the other winners….Up to the last minute she was taking classes and she did it fantastic,” she said.

The Bb Pilipinas matriach knows what Pia went through, having been a former titleholder herself. After winning Miss International in 1960, she married businessman Jorge Araneta. She has chaired Bb Pilipinas since 1964, after she was assigned by her father-in-law, J Amado Araneta, to run the organization. According to Stella, she took on the job because she knew the business well.

She added that her loyalty to the country is not an issue to her anymore.

“I’ve been running Binibining for so many years, so don’t you think my heart should be here in that respect? I’ve poured my heart and soul in this. They will ask me what would you choose and I’ll say, ‘I’m Colombian but I would choose Philippines.’ No, that’s the way it is.  I am in Binibini and I run it and she’s a product of my contest. Why would I go for Colombia?” she said.

She shared that she and the organization are preparing a big parade for Pia’s return to the country. Pia is currently in New York, where she will reside for a year during her reign.

As for her message to Pia, Stella said: “Enjoy it. It’s hard to follow orders for a whole year.”

In January, Stella found herself criticized by the public after the national costume made by Colombian designer Alfredo Barrazza, which was inspired by the Panagbenga Festival of Baguio, got negative reviews.

Following the criticism, Bb Pilipinas said it is open to collaborating with Filipino designers. The national costumes of the 2015 queens were all made by Filipino designers for their respective pageant assignments. – Rappler.com