MANILA, Philippines – With the main queues stretching from the entrance of the concert grounds to the College of Education front steps, spectators invaded the UP Sunken Garden last Saturday, February 18, for the culminating event of the 2012 UP Fair.

Entitled, “HIMIGsikan,” the offering of the UP Student Council with the Pi Sigma Fraternity’s 40th anniversary celebration brought a crowd that can only be described as gargantuan. A lineup of Parokya ni Edgar, Up Dharma Down, Razorback, Kamikazee, Urbandub, Franco, Gloc 9, Chicosci, Giniling Festival, Silent Sanctuary and other acts usually does that, and on that Saturday night, the bands didn’t disappoint.

The mud didn’t seem to matter as the crowd became electric and energized the performers. The loudest cheers were given to Parokya ni Edgar and Kamikazee, two bands that provided comedic commentary during their performances.

Jay Contreras, frontman of Kamikazee, even went as far as giving away his shoes, throwing them to the crowd in their 4-song set.

“Teka, mali ata yun ah (Wait, I think that was wrong),” he remarked afterwards, much to the delight of the crowd.

Another notable gimmick was Giniling Festival’s Jeje Santos sporting a giant orange dragon’s tail, wagging it to the crowd while dancing erratically on stage.

The event capped the fair which started on February 14. On Thursday, February 16, local bands and artists graced the fair’s Love Rage 6 concert. Among them: Peryodiko, Duster, Banda ni Kleggy, Pedicab, Gracenote, and Gameclub. 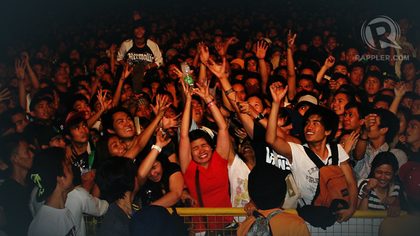 Keeping true to fine UP tradition, the event not only entertained but also enlightened.

Current issues that ranged from the educational budget to desaparecidos were discussed lightly but passionately, and bands such as The Wuds, Republika de Lata, and Talahib made their sentiments known when they went on stage.

Even the hosts joined the advocacy for change, as hiphop artist BLKD (pronounced, “Balakid”) also chipped in by performing with Talahib, alongside fellow MCs Kjah and Kahir.

The UP Student Council, organizers of the event, declared that the proceeds will go to the betterment of the education of the “Iskolars ng Bayan,” and that even with the rise in their tuition, the student council will “work hard to improve our situation and reach our academic goals.” – Rappler.com