Everything has changed, everything remains the same

Feb 25, 2012 12:00 PM PHT
Facebook Twitter Copy URL
Copied
The Philippine paradox is that, despite the inevitable change at the surface, everything remains the same.

MANILA, Philippines – It’s 26 years since the first Edsa uprising. Rappler looks back at the cultural and technological touchstones that separate one generation from the next—from communications to lifestyle to language. The paradox of the Philippines is that, despite the inevitable change at the surface, at the core, everything remains the same. 2001: Text messages sent thousands to Edsa to support the call for the ouster of former President Joseph Estrada.

2012: Text, e-mail, Twitter, Facebook, and blogging changed the face of movements and upheavals — think Arab Spring, the London Riots and Occupy Wall Street. Not surprisingly, the Philippines is now Facebook’s top market in the world –evolving from the text messaging capital to social media capital of the world. 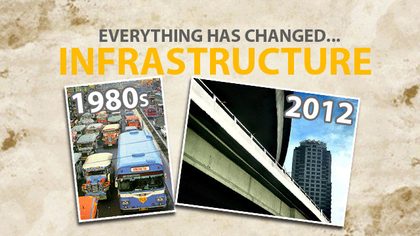 1980s: Aside from the Light Railway Transit that became operational in 1984, underpass are the rule-of-thumb in metro infrastructure, leaving the blue skies of Manila largely unobstructed.

2012: Now it’s a crazy network of flyovers, railways and pedestrian walks everywhere, with less skyline to admire during bumper-to-bumper traffic. 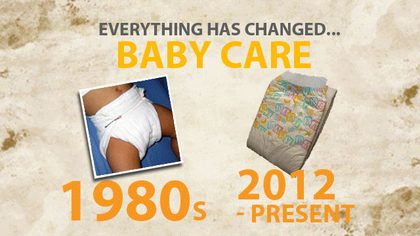 1990 – present: Mommies, don’t you just love modernity? And let’s not even start with the life-changing benefits of adult diapers. 1980s: Cannabis or marijuana is the drug of choice.

2010: Crystalline methamphetamine or shabu is the most commonly used drug. 1986: The Catholic Church is a force for change, a vital ally in the anti-dictatorship struggle.

2012: The Catholic Church is a force for conservatism, the greatest roadblock to the passage of the RH bill. EVERYTHING REMAINS THE SAME 1986: The reluctant housewife runs for president on a platform of change and wins.

2011: The reluctant son runs for president on a platform of change and wins. 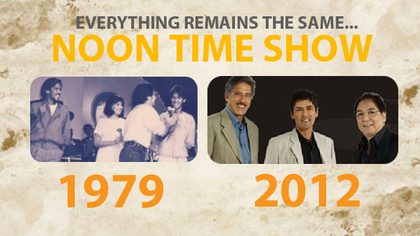 1979: Eat Bulaga goes on air and goes on to dominate the noontime slot.

2012: Many co-hosts/girlfriends and 33 years later, the trio’s raunchy jokes still hit home with the Pinoy masa. 1987: TV Patrol catapults to No. 1 after reformatting as a tabloid newscast with radio talent Noli De Castro as anchor.

1983-1996: Traffic jams are described as “horrendous” by a UN Habitat report. Average travel time in Metro Manila rises from 42 minutes to 53 minutes, one of the highest figures in the world at that time. 1968: UP professor Jose Maria Sison establishes the Communist Party of the Philippines on December 26, the birthday of communist China’s Chairman Mao Zedong.

2011: The CPP considers its present struggle to be at the “advanced sub-stage of strategic defensive,” a stage it has been in for at least 24 years. It is the longest running communist insurgency in Asia. 1986: The Left starts talking peace soon after President Corazon Aquino assumed office. For over 2 decades the Philippine government and the NDF conduct 40 rounds of intermittent talks.

2011: 24 years since the first peace talks, the Philippine government and Red leaders resume peace talks, making it the longest-running peace negotiations in the world. But peace talks are never sweeter the nth time around. Talks cool down in 2012, while the combatants gear up. 1987: Corazon Aquino releases political detainees in 1986 in the aftermath of large-scale torture and human rights abuses under Martial Law.

The Mendiola massacre, the 1987 violent dispersal of a farmer’s rally where 13 peasants are killed, and the “unsheathing of the sword of war” against communist rebels, makes for a spotty human rights record for Mrs Aquino.

2009: President Benigno “Noynoy” Aquino III orders the release of the Morong 43, supposed community health workers, alleged by the military to be communist rebels in 2010.

His administration faces a tougher challenge in prosecuting the powerful Ampatuan family, prime suspects in the massacre of media men and members of the Mangudadatu clan in 2009. The massacre is the single deadliest event for journalists in history. 1983: The book “Luha ng Buwaya” by Amado V Hernandez comes off the press, with the buwaya or crocodile as the central symbol of corruption.

Studies in 1998 and 1999 say corruption is pervasive and deep-rooted with very large amounts of public funds being lost to both political and bureaucratic corruption.
2011: Tales of large-scale corruption by former AFP Comptroller General Carlos Garcia boggles the imagination of Filipinos and keep viewers glued to the best reality show in town: Lives of the Rich & Corrupt. The suicide of another implicated general, former AFP chief Angelo Reyes, adds tragedy to the mix. 2011: Daughter and teen heartthrob KC Concepcion’s heart is broken by her on-and-off-screen sweetheart. Thankfully, marriage and joint accounts did not complicate the break-up. 1960–1980: Ferdinand Marcos, Teofisto Guingona, Lorenzo Tañada and Claro M Recto leave their mark on the Senate — some infamous, some sublime.

2012: The surnames are still there in the august halls of Congress. Alas, the scions aren’t as stellar. 2012: Impeachment Presiding Officer Enrile takes center stage as the man whose leadership may bring down (or save) a Chief Justice. -Rappler.com