Do good, feel good at The Giving Cafe in Mandaluyong 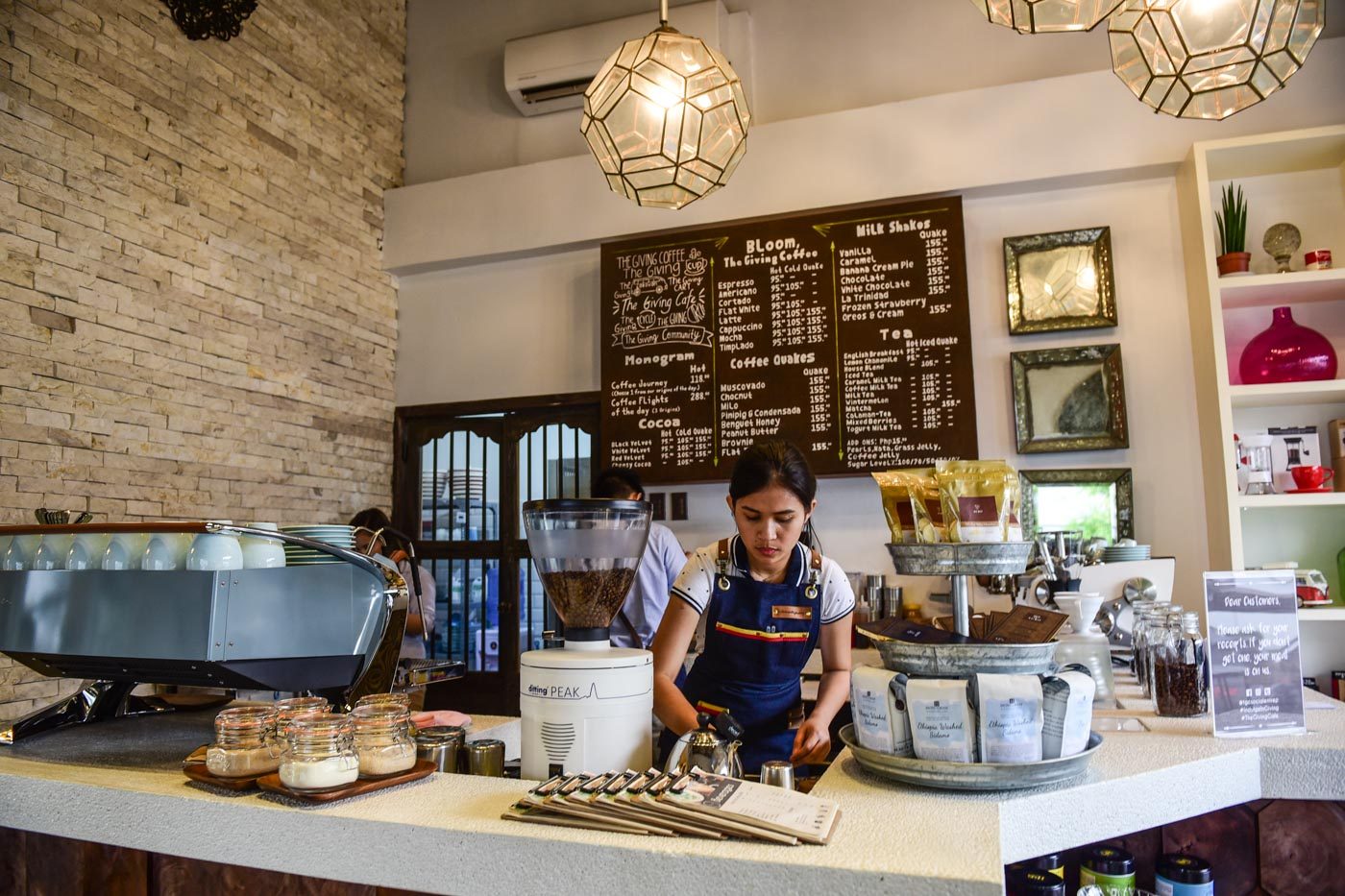 MANILA, Philippines – The Giving Cafe – located in a busy intersection in Mandaluyong – is as charming as you’d expect. With bright, well-lit interiors and charming decor, it’s as cozy as any regular cafe – perhaps even more so with a dedicated reading nook right by the window, and many instagram-able corners – which, as anyone doing business in this day and age will know is a surefire way to attract a flock of hip, millennial clientele.

Perhaps it’s the unique interiors, or the energy kick from the scent of coffee – but something about The Giving Cafe will perk you up as soon as you step in – and that’s even before you find out that by supporting the cafe, you’re helping along a social enterprise. 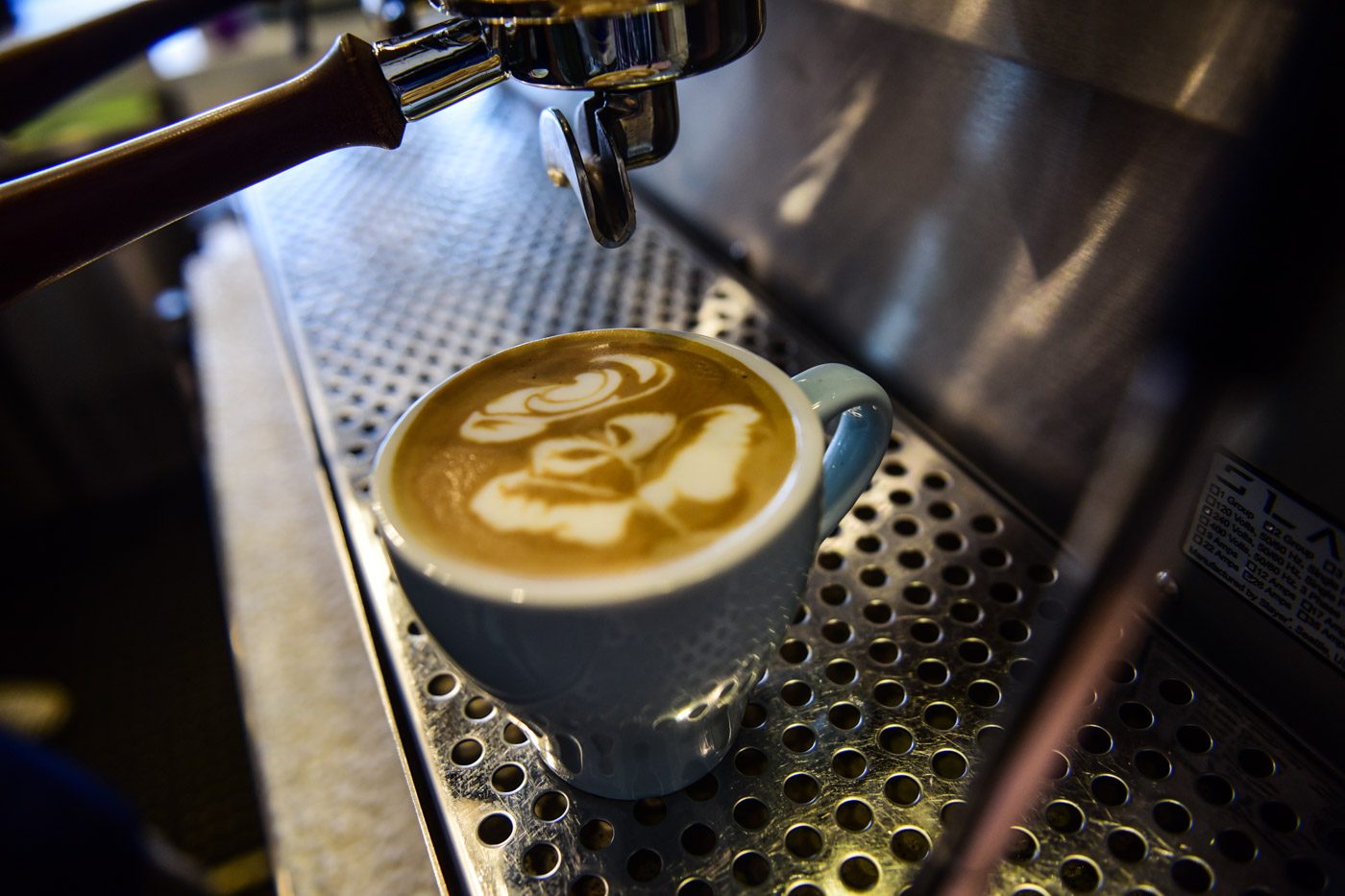 The Giving Cafe (TGC) was actually created to raise funds for the Foundation for Sustainable Coffee Excellence (FSCE), which has been supporting a farming community in La Trinidad, Benguet for years, giving the farmers and their families access to basic necessities such as potable water, medicines, and education.

The partnership began when TGC owner and FSCE director Michael Harris Conlin – who started coffee roasting company Conlins in 2004, and now runs another coffee company, Henry & Sons – went to La Trinidad to speak to local farmers about how they can earn by farming coffee. Despite La Trinidad’s elevation and it’s prime coffee-farming climate, Harris said that it wasn’t the crop of choice at the time. At the end of his talk, Harris was approached by a farmer who was excited to sell him a supply of coffee. Wanting to support local products and thinking about the nearly 20 tons of coffee Henry & Sons easily goes through in a month, Harris agreed to take up the farmer’s offer.

To his surprise, the farmer only had 60 kilos of coffee to sell – which according to Harris is not a lot at all.

“I was actually shocked…The reality is, there’s not much supply. So through there, I had a lot of time to think about it,” Harris said, sharing that it was after that encounter that he decided to do something more for the farmers. After sending a team of “millennial brainiacs” to immerse themselves and determine what the community needs, Harris created a local coffee line called Bloom Coffee.

It comes in 5 subtly different variants, each addressing one of the community’s key needs: potable water, vaccinations and anti-dengue nets, a scholarship program to guide local kids into studying agriculture, improved post-harvest facilities, and programs to connect local farmers to global buyers.

Even after making sales and partnering with several restaurant chains to support the cause, Harris felt like they still needed to do something more.

At this point, they relied on the attention-grabbing powers of a bright yellow 1970 VW bus, which they called The Giving Caravan, which drove through the streets of BGC, selling local coffee to the customers who probably need it the most: BGC’s yuppies and night owls.

The caravan was a runaway hit, which got Harris thinking even more.

“It was able to raise funds for the foundation more than just putting [the coffee] on the grocery shelves. So we said, ‘Hmmm, what if we make a cafe?’” Harris said. “We’re a bunch of dreamers here…we thought about the cafe, we said, ‘Let’s give it a try, let’s see if we can do it.’”

Just like that, they did. In July 2017, they opened The Giving Cafe, which even at first glance is not your typical coffee shop. The requisite lingering coffee scent is there, and so are the bright but cozy lights. But the attention to detail in the design makes everything different. The cafe’s high ceilings are covered in banig and abaca rope. From the entrance, a light fixture made of aluminum pipes takes the place of an expensive chandelier – and looks just as good. “Rope Master,” the name of the abaca rope supply company built by Harris’ grandfather, is painted on one wall, under which a vintage card catalog chest filled with coffee fact cards rests. Right across from that wall is another mural that says, “We achieve more when we chase the dream instead of the competition” – a tribute to the dreamers who built TGC.

The countertops are done in pebble wash – a throwback to the houses of the ’70s, and the walls are filled with shelves that house everything from old family photos, to quirky curios, to the Lego sculptures made by Harris’ brother. The overall effect is very inviting, as if you were visiting the home of a friend who just happened to be a top interior designer. “One of my frustrations from being in the coffee industry for so long is, a lot of people who open coffee shops, they look to American brands or foreign brands. The influence is always foreign,” Harris said. “What we wanted to do here, our goal here is not only to help the farmers of La Trinidad, the farmers of the Philippines, but also show Filipinos that if we keep true to who we are and use what we’re good at, use Filipino items from the past, from our everyday lives, we can make it look good.” “The entire place is a showcase of what the Filipino can do, and from there, what we can do for the Filipino farmers,” he said.

As far as spaces go, this one is set up for work AND play. It’s got fiber internet, free for the first hour, and then at a minimum hourly fee after that, which is more than you can say for most coffee shops these days. There is a reading nook, and what can be considered a mini-library filled with books that you’ll enjoy if you’re of the YA persuasion. (The reading corner also doubles as a nap corner, though Harris says they haven’t caught anyone dozing off there – perhaps it’s the coffee).

There are board games for barkada hangouts, which can only get better with a tub of the cafe’s bacon popcorn – an inspired creation, genius in its simplicity – that will ruin all other popcorn for you forever.

The menu is another thing about The Giving Cafe. It is of course centered on the coffee –  everything from single origin tasting sets for the serious third wave enthusiasts (P288 for the Coffee Journey that includes 3 origins), to the Timplado (P95 for hot, P105 for iced, P155 for Quake) which Harris describes as “brewed coffee made to taste like 3-in-1,” for less discriminating taste buds. “We don’t consider ourselves a third wave cafe. We do things the third wave way, we understand it, we teach it, but at the same time we want to stay true to being Pinoy…We have everything for everyone here. Variety is good,” Harris said. On the food side, the menu is made for comfort, if the aforementioned bacon popcorn is any indication. The sizeable bowl contains popcorn doused in generous amounts of butter, and topped off with bits of bacon – and if that isn’t comfort food for you, we don’t know what is.

They also serve up rainy day dishes like Champorado (P195) with your choice of powdered or condensed milk, Sopas (P195), and Arroz Caldo (P195). There is also Chinese food – which is not something you’d expect from a coffee shop, but is a tribute to Harris’ Chinese heritage. And anyway, it fits right into the “comfort food” idea – because who doesn’t feel better after tucking into a good bowl of Yang Chow fried rice (P135) and sweet & sour pork (P205)?

Harris’ personal favorite is the Taiwanese Fried Chicken (P280) – a dish he fell in love with as a student in Canada. The boneless fried chicken chop is served with a generous amount of sauce which he has explicitly told the servers not to scrimp on. “When we were thinking of it we said, in Manila we’re always stuck in traffic, lagi kaming gutom (we’re always hungry) on the road so I wanna eat comfort food, before I get on the road,” Harris said. “It’s nostalgia. When you bring nostalgia into the equation you have an automatic connection to the place. That’s the idea,” he added.

The Giving Cafe is a place built out of good intentions, for both the community it serves, but also for the people who go there. That, plus the food and the homey ambience makes it almost inevitable to come out of this place feeling nothing but good. – Rappler.com

The Giving Cafe is on the corner of Sheridan cor. Pines streets in Mandaluyong. It’s open from Tuesday to Sunday, from 7 am to 10 pm.

Spend a day at the Giving Cafe. Get there safely with Grab.