MANILA, Philippines – The cat is out of the bag…and in the mountains it seems.

“Mountain Lion”, Apple’s upcoming operating system was teased by Apple February 17th – and should get to consumers as soon as June 2012. From here on out, Apple’s promising one major operating system release every year, and starting with Mountain Lion they’re dropping Mac from the Mac OS X name. This one will simply be referred to as OS X 10.8. So what does this mean to Mac users? Why should you care about another release? Will it be worth spending money on? And is this just an incremental update or is there anything to get excited about?

While it may be premature to give a definitive answer to any of these questions, from what I’ve seen so far, Mountain Lion is a step further into the future of computing.

Back in 1983 Apple led the PC revolution inventing computers with a graphical user interface (GUI) – that is a computer with a desktop, icons, and a pointer – this became the standard we still use today. But it seems, with the ninth iteration of OS X, the Mac is looking more and more like the iPad.

With Lion we already saw plenty of iOS built into Mac OS. There were multi touch trackpad gestures, launchpad – which mimicked the way users launch apps on an iOS device, and full screen mode for applications.

In Mountain Lion we’re seeing a slew of additional features similar to those made available to the public with iOS 5. Messages, Notification Center, Game Center, and Twitter integration to name a few. For me what I’ll probably use the most of these new features is “Messages” which replaces Apple’s instant messaging application “iChat”. I’m excited because as its name implies, Messages brings iMessage integration to the desktop.

iMessage is free text messaging system for iOS users (iPhone, iPad, iPod touch) similar to the Blackberry Messaging (BBM) system. Because iMessages are sent over the Internet they are free no matter to whom or where in the world you are texting.

The beauty about iMessages is that they sync across devices. For example, I start a conversation with friends on my iPhone but want to lie down and surf the Internet from my iPad. I can leave my iPhone on my desk, lie down on the couch, and with my iPad in hand continue where the conversation left of.

“Messages” on Mountain Lion will allow me to take that scenario a step further. Say for example I need to get some work done on my Mac, I would be able to continue that same conversation on my computer.

This for me brings messaging full circle. You can now text on your phone, your tablet, and your computer – provided they are all Apple devices. The good news is, you can try the Beta version of the new Messages app now by downloading it for free at this link. 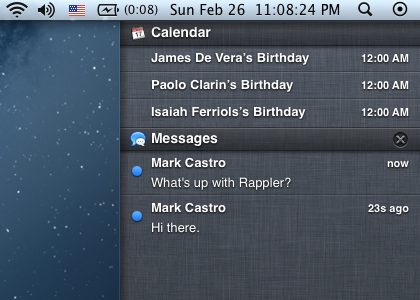 It’s great for obsessive people like me who always want to be in control of things.

It’s worth noting that there’s an app called Growl which has been providing notifications for years. As a long-time Growl user myself am happy to see Apple build this funcitonality into the OS although am not sure if it will eventually kill Growl’s business.

There’s nothing really new here. If you’re a Mac user you should have an iCloud account by now. But this is the first time an OS was released after iCloud’s release in 2011 – meaning it is the first time iCloud is built into the OS. Like when you setup a new iPhone or iPad, when you setup your Mac for the first time on Mountain Lion you are immediately asked to sign in with your iCloud account – once done, your  Mail, Contacts, and Calendars should sync over. Documents have been added to the mix which means you can start a Pages document on your Mac and continue writing on your iPhone or iPad.

iCal will be renamed “Calendar” on OS X 10.8 just like it is called on iOS (notice how iOS is also beginning to dictate conventions). Notes, which used to reside inside Apple Mail is now a standalone application, just like on the iPhone/iPad/iPod touch. Your notes sync across all your devices thanks to iCloud and by double clicking individual notes you can pin them to your desktop and keep them floating on top as reminders. “Notes” looks just like “Notes” on iOS except that you can choose any font you like or add online images to your notes. Reminders is a new to-do app for the Mac. It made its first appearance as an iPhone app in iOS5. Nothing special here, its like any simple To-Do app. You can organize to-dos into lists and get alarm notifications at set times to ensure you don’t forget. The value for me though as an iPhone 4S user, and the reason why I use reminders over other fancier, more sophisticated task management apps, is the fact that I can dictate new reminders to Siri once I think of them. If you’re like me who gets plenty of ideas when my mind is idle (i.e. driving, showering, on the throne) then being able to dictate to-dos to Siri is priceless.

I’d say something like “Siri remind me to buy a new car tomorrow at 1pm.” And Siri would add that to my To-Do List. On Mountain Lion, it would sync over my Mac as well. Apple calls it “reminders everywhere”. Of course like anything you’ve read here so far, to maximize these features you’d need to buy into the entire Apple ecosystem. 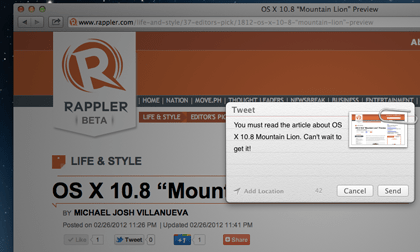 The share button should be familiar if you have an iPhone/iPad/iPod touch. Bring up the share button on Mountain Lion and you get a whole range of sharing options, AirDrop, Flickr, Mail, Messages, and Vimeo. And let’s not forget the star of the show, Twitter. As in iOS 5 Twitter is integrated tightly into Mountain Lion, you’ll get Twitter notifications for @replies and direct messages in Notification Center, you can easily post to Twitter, and can even sync your Twitter contact’s photos to matching names on your address book.

Still obviously missing is any direct integration with Facebook. There was a time when Apple and Facebook got together well, think back to iPhoto ‘09 when the ability to import albums directly to Facebook was introduced.  But now that Facebook is looking more like an app and communications platform, which is also Apple’s turf, it looks like the two won’t be playing together as close as we would have liked.

You can skip this bit if you don’t have an HDTV and an Apple TV. But if you have both then you’re in luck. AirPlay allows you to display on an HDTV whatever it is that is on your computer screen. Whether it is a movie, a Keynote presentation, a web page, even your desktop. They’ll stream to your HDTV in 720p and stereo audio. AirPlay is already available on devices running iOS5. With the success of the Mac App store, and the even greater success of iOS devices as gaming devices, it isn’t any surprise that they are bringing Game Center to the Mac. This just means that you can play against friends on your Mac, or at the very least try to outscore each other if you own the same titles. I like Game Center on the iPhone because it brings out my competitive spirit when I know how well my friends are doing. (On a side note, among all my Game Center friends I have the highest score on Temple Run, 18.8M) You should, on some games, be able to go head to head against users on an iPad or iPhone/iPod Touch from your Mac.

So far, Macs have been pretty reliable in terms of security. I’ll probably get crucified for this “snobbish bit of Apple superiority talk”, but I don’t worry about viruses much on my Mac, and I have never had to reformat my Mac which was common-fare when I was still a PC user.

But there are risks, and one common risk factor is when you install applications from unreliable sources. To address this (aside from its obvious financial benefits, and the move towards a more iOS-like computing environment) Apple setup the Mac App store recently, allowing you to purchase Apps on the Mac as your would do on your iPhone. This controlled environment while lambasted by some for not being “open” – also means that Apple is able to manage security risks. Users however still have a choice if they want to get their applications elsewhere.

Gatekeeper adds a layer of security by allowing you to set restrictions to applications that can run based on their source. Option 1 is Mac App store only. Option 2, which is the default in Mountain Lion is any application – from the Mac App or otherwise that has been digitally certified by Apple. Or Option 3 which is free for all.

Should you upgrade to Mountain Lion once it comes out?

YES. The features are well worth the upgrade, especially if you have other Apple devices, upgrading means you’d have access to all the latest features Apple has up its sleeves. With Lion Apple doing the unthinkable by pricing their new OS at a mere $30 dollars – that’s about Php 1350, which is relatively cheap considering how much an operating system costs. For context, Windows 7 is priced at about Php 5000 for Home Basic, and Php 8000 for Professional. Having said that an upgrade, if Apple decides to price Mountain Lion the same way, is worth every buck.

Mountain Lion won’t run on some older Macs. The Unofficial Apple Weblog (TUAW) has a list of models that won’t be able to run Mountain Lion when it comes out this summer.

Also it must be said that I am an Apple fanboy, and while some see Apple as evil, I am quite happy with the overall experience that Apple has created. While this doesn’t mean that I am not open minded about technology, or that I don’t see any of Apple’s negatives, OS X is my operating system of choice. At the end of the day it’s your choice – but the way I see it, if you didn’t like Apple too you probably wouldn’t have read up to this point. 🙂 – Rappler.com