These reusable bags are a stylish way to cut waste MANILA, Philippines – The SM green bag, the shopping giant’s pioneering reusable shopping bag recently turned 10. Like a proud parent doting on a precocious child, SM Markets celebrated this momentous turn with an afternoon birthday party at the Music Hall of the SM Mall Of Asia.

It was also the perfect occasion to introduce a bigger, trendier version of ye old green bag. It can carry more grocery items, as it is the equivalent of three SM ecobags put together. Available for a limited time at P35, the new ecobag boasts a swanky design – red and green chevron waves – a nice look that will hopefully encourage many to utilize it beyond supermarket duties. Whether it’s a trip to your yoga studio or travelling with a new baby, the new and improved bag design has enough space, sturdiness, and flair to do the job of carrying your essentials. 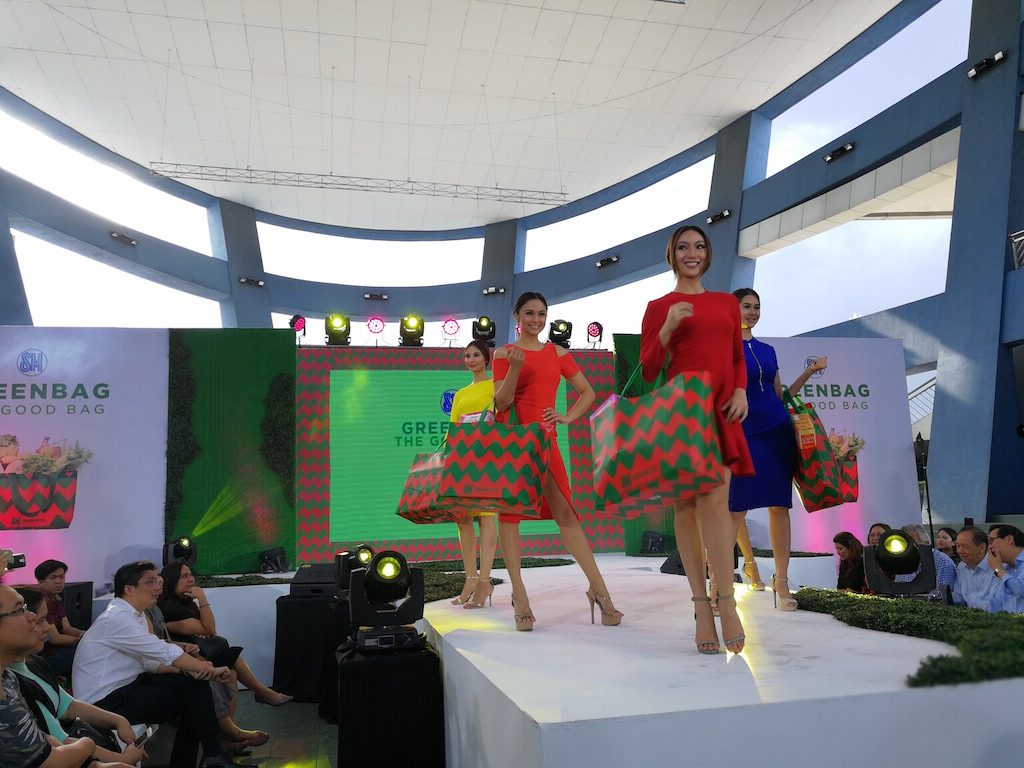 To underscore its versatility, a mini fashion show was held featuring Ms Earth 2017 herself, Karen Ibasco and her fellow Ms Earth Philippines contestants.

Introduced a decade ago to help usher in ecofriendly shopping habits among its huge clientele, the now-ubiquitous SM ecobag has sold over 38 million pieces. This translates to a hefty 75 million plastic bags saved.

“We assume that for every bag you use is equal to 2 plastic bags,” explains Joey Mendoza, SM Supermarket president, on how they arrived at this number. “We were saving valuable resources and also helping avert environmental problems like plastic bags clogging the drains, floods, over-filling landfills and threatening wildlife due to improper waste disposal.” As with many endeavors meant to influence old ingrained habits, it wasn’t well-received at first. Sales initially suffered as customers balked at the idea of buying green bags when free plastic bags were the norm, let alone accepting the idea of lugging around empty bags when shopping. In 2007, bringing your own bags was not as widespread a habit as it is these days.

It was slow going but their gambit soon bore fruit. It helped their cause when they came up with Join the M.O.B. (My Own Bag) day campaign, which they employ to this day. Every Wednesday all SM supermarkets and Save More stores go plastic-free.

This encouraged a number of people to get green bags since they were still charged, however minimally, for every plastic bag they requested. Other incentives were also used such as the doubling of reward points if you shop with a green bag. As Mendoza puts it, the Join the MOB campaign “was a bold move but we were confident that it would spur the change necessary.” Indeed it was; especially for a company that is not particularly known as an environmental advocate.

On the strength of this green bag initiative, SM Supermarket has been cited by the Department of Environment and Natural Resources as a model for environmental activism in 2010. Three years later, it won the Zero Basura Olympics for business from Earth Day Network Philippines.

Mendoza is also quite proud of the fact that proceeds from their green bag was able to help in planting over 530,000 trees in city parks and nearby forests. Nowadays, more and more people are into ecobags. It has even joined the league of mugs and umbrellas as promotional incentives by other businesses. It is no longer considered a novelty if you have a bag or two in your purse for that spur-of-the-moment purchase. It is a simple way for us consumers to participate in the lifelong project to protect our environment.

A word of caution: Making the switch from plastic to ecobags is not enough though. For ecobags to genuinely fulfill its raison d’être, we should use them on a regular basis.

Actress Camille Prats – Yambao, who aside from showbiz, juggles multiple roles as a mother and preschool owner, understands that the act of bringing our own bags can still be challenging no matter how good the intentions are. She has evolved a simple way to counter this.

“After I shop, I go home. I unpack everything, I fold it and put it right away in the car” she says. “So every time I do an emergency grocery shopping, I know that the ecobag is there. Leave it in the car so that every time you need to go, it’s there.”

Or immediately stow it into your main bag, as the case may be. Let us remember that the most important aspect when it comes to ecobags is the frequency of use. The more you use it, the better it is for the environment. – Rappler.com