Wearing the Philippines: How Catriona Gray’s national costume went above and beyond Facebook Twitter Copy URL
Copied
From traveling the country to ask permission from locals, to getting lectured on Philippine history, the new Miss Universe put so much effort in her Philippine ensemble – but why?

At the Miss Universe 2018 national costume show, the woman who stunned the world with her lava walk seemed significantly slowed down – though every bit as graceful – as she wheeled her enormous costume down the runway (which unexpectedly turned out to be carpeted, making it that much harder for her to carry her costume).

The ensemble itself looked like a magnificent mishmash of designs: a patterned bodysuit, a beaded headdress, a molded brass belt, various fabrics on her thigh-high shoes, and a brightly-colored lantern as backdrop.

In the past, Filipina Miss Universe candidates wore relatively more streamlined, elegant ensembles. Many chose to go the Maria Clara or terno route, others decided to wear Maranao-inspired outfits, some decided to channel the colorful sarimanok.

They were costumes, yes, but they were still wearable outfits – and the prettiest ones, with some adjustment, would not have looked out of place in a high-fashion editorial. (IN PHOTOS: PH bets’ national costumes at the Miss Universe pageant)

By comparison, Catriona’s costume looked infinitely more complicated – but perhaps in that way, more representative of a country with many various cultures, languages, and ethnicities. Anyway, whether or not her costume was fashionable seemed to be the least of Catriona’s concerns. She only wanted to showcase the country’s rich culture in the most authentic way possible.

This meant having elements that represented not just one part of the Philippines, but the country in its entirety, while also including snippets of Philippine history.

“During our discussions way back in June 2018, I listed down all of the provinces of the Philippines, and noted all of the cultural strengths of each province, and from then on, she immediately chose the parol, pintados, and of course the fabrics from Mindanao,” her mentor, Carlos Buendia explained at a press conference at the official launch of the Philippine Quincentennial Comemmorations.

The final design became “LuzViMinda,” an outfit that paid tribute to the country’s 3 major island groups. Luzon was represented by the giant parol, Visayas by the patterned bodysuit, and Mindanao by the beaded headdress, brass belt, and patterned shoes. Carlos said that he warned Catriona that the whole ensemble would be very heavy (the parol alone weighs 50 kilos), but the beauty queen didn’t balk.

“She would just gladly say yes. She didn’t have concerns about difficulty, but her concern is how to showcase the culture,” he said.

Putting the outfit together took all of 6 months – including the time it took for Catriona and designer Jearson Demavivas to travel around the Philippines and personally ask permission from each tribe or group to use the particular pattern, weave, or design they were planning to include in the costume. 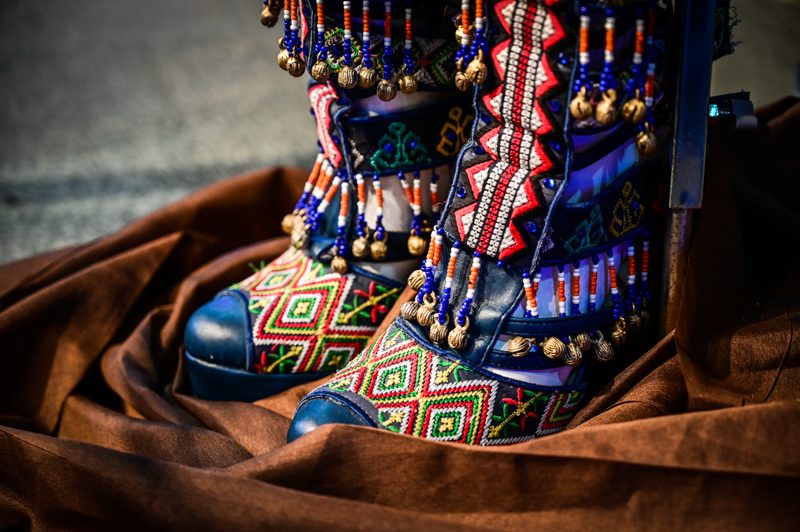 It took a lot of time and effort to travel, but Catriona insisted that she wanted all the elements in her costume to be authentic, and to have the blessing of the people that will inevitably be represented in them.

Historian Xiao Chua was contacted by Carlos for something that seems unusual in the process of preparing for a beauty pageant: the professor was asked to give Catriona a lecture in Philippine history.

(I didn’t know why I was called. Why would I lecture her about Philippine History when it isn’t normally a topic in beauty contests, especially international ones?) 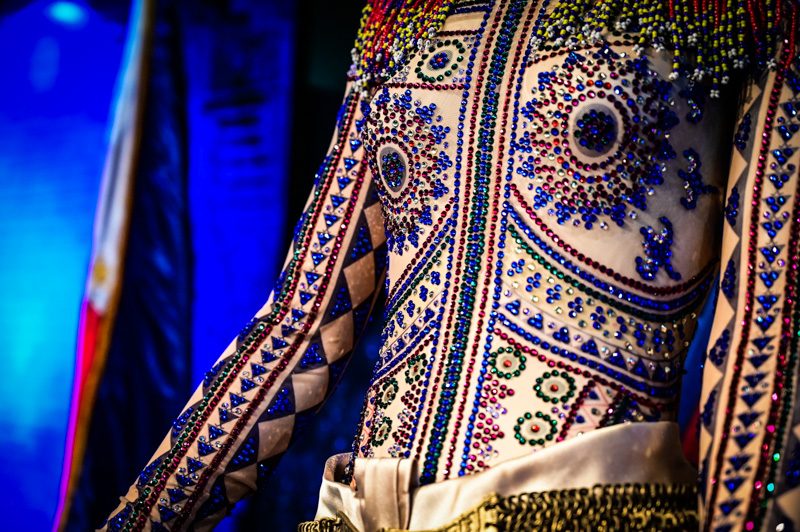 He shared that when Catriona came to him, it wasn’t specifically to consult about her costume, but really just to learn about the country’s past. He described her as “intellectually curious,” someone you could tell was actively listening, and who asked a lot of questions.

Later on, when he saw the national costume, Xiao was blown away by how much of the Philippines was included in it. Not only did it manage to represent the 3 major island groups, and include snippets of Philippine history and spirituality, but it also paid tribute to the country’s natural wonders by including the words in the Philippine national anthem that sing about the country’s seas, mountains, air, and sky, written in Baybayin.

(As a historian, what can I say? I contributed little to Catriona. It was impressive because they knew what they were going to do, but they were inspired to study more.) “Nationhood was actually an invention that was imagined by our heroes through ideas and through culture. That’s why if you want to unite a nation, if you want to show the oneness of a culture, you have to represent each one of them, but you see that there’s a common thread in a lot of these things,” he told Rappler.

“That’s what Catriona did, with the back part especially. You have Muslim worship side by side with the Black Nazarene, and then you have different festivals in different parts of the country, which are religious festivals, by the way. There’s also religious significance in the tattoos of the Visayan pintados. The spirituality, the mabuting kalooban, the matatag na kalooban, all of these were represented.” Another historian, National Historical Commission of the Philippines (NHCP) chair Dr. Rene Escalante, was so impressed by the costume that he wrote to Catriona as soon as he saw her wear it on stage. In his letter, he asked to borrow the costume to put it up in exhibits for the public to see. It was a request that lifted Catriona’s spirits after the National Costume show, when she experienced several technical difficulties, including an unexpected carpeted runway, and the parol piece not lighting up as planned.

(At first Cat was sad that the parol wouldn’t light up. Hours after that, we received a letter from the NHCP. She just cried and said ‘mission accomplished.’)

Of course, she granted the NHCP’s request, and the costume is now in their custody. While preparing the costume for display, workers took note of the weight of the ensemble, counting over 10 kilos without the parol piece.

The costume is set to be displayed for public viewing at the NHCP in Manila on Rizal Day, December 30. Strictly speaking, Catriona didn’t need to go through all of that trouble for her national costume. That part of the pageant has no bearing on the candidates’ final scores. So why even did she bother?

One could say that in wearing a beautiful, colorful, complex ensemble and bearing its weight gracefully despite complications, that’s exactly what Catriona did. – Rappler.com