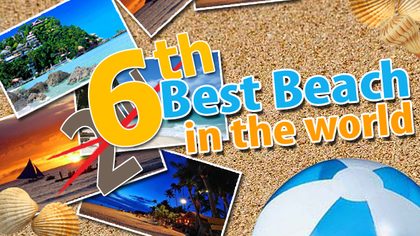 MANILA, Philippines – Millions of online voters on the largest travel site have ranked the idyllic Boracay island in the Philippines among the Top 10 best beach destinations in the world and the best in Asia.

TripAdvisor.com released its 2012 Traveler’s Choice of Award Winning Beach Destinations where Boracay was ranked the 6th best beach the world in 2012–4 spots down from a year before when it ranked 2nd.

The new list features the 25 highest rated beach destinations among 181 locations all over the world. When it launched in 2011, TripAdvisor only highlighted 10.

The site described Boracay this way: “At only 4.5 miles long, Boracay is small enough to navigate by rented bicycle or motorbike. But don’t let its small size fool you—you’ll have several excellent beaches to choose from. Yapak Beach is known for beautiful white shells; White Beach has picture-perfect sunsets; and Balinghai Beach is a secluded spot, perfect for honeymooners. As long as you visit during dry season, you’ll agree this is one of the best beach destinations in the world.”

The dog-bone-shaped island in the Visayas region has ranked prominently among the best in the world. Watch feature below.

Below is a summary of the 2011 and 2012 lists of the highest ranked beaches in the world.

The TripAdvisor 2012 Traveller’s Choice Beach Destination Awards were based on the ratings of beach destinations by travellers in millions of reviews uploaded onto the site.

The site had started to collate the highest ranked beaches after noting the most of its visitors are planning a vacation around this time that includes a beach destination. The list has already concerned governments, such as Australia’s, which have been proud of their beach destinations though none made it to the Top 25.

In the case of Boracay, it lost its spot in the Top 5 this 2012 since 3 beaches inched up to join 2-time-in-a-row leader Providenciales (in Turks and Caicos in the Caribbean).

Palm/Eagle Beach in Aruba, another Caribbean island, took over Boracay’s top 2 rank, while 2 beaches in South America aggressively kept their Top 5 status. Tulum in Mexico advanced 2 spots to No. 3 while Negril in Jamaica stayed firmly at #4.

Saint Pete Beach in Florida was a surprise addition to the Top 5 this year, having been largely ignored in the 2011 list.

Boracay, however, remained firmly on the Top Spot in the Asia list for the 2nd time in a row.

Of the Top 10 Beach Destinations in Asia, it is the only Philippine beach that was featured.

Thailand has 7 beaches in the list but none of them made it in the list for world’s best. – Rappler.com