LOOK: These 7 milk tea-flavored treats are for the milk tea-obsessed 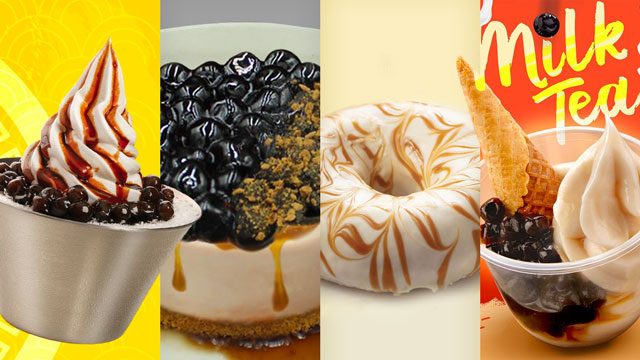 Whatever drew you in, it doesn’t matter – we bet you’re locked in for good, and we’re also sure you’ve shamelessly lined up for it, shelled out money for it, and broken your sugar level caps for it at least once in your milk tea-obsessed lifetime.

But it’s not just the iced beverage people are clamoring for – the many iterations of the sweet drink are all the rage now.

Milk tea-flavored donuts, soft-serve, cheesecakes – here we round up some of the most interesting milk tea treats we’ve seen so far, because when it comes to milk tea, may forever.

Forget the ribs and chicken – Kenny Rogers threw their customers a sweet curveball in June with their quirky new dessert: the milk tea soft serve.

It’s vanilla soft serve ice cream drizzled with a black tea sweet syrup, served with tapioca pearls and then topped with a sugar cone. Many diners raved about it – would you, too?

When it comes to amping up their donut game, don’t understimate Krispy Kreme – there’s a new Wintermelon Glaze donut in town, and according to them, is the first in the country. Krispy Kreme’s November Holiday Glam series features two flavors: Wintermelon and Brown Sugar Glaze, and Wintermelon and Cream Cheese Frost, both reminiscient of your favorite milky beverage. We can only imagine the sweetness!

Curious to try this? When it comes to the milk tea trend, almost nothing is spared – even your favorite Korean shaved ice dessert.

Sundae morning, pearls are falling… on top of McDonald’s signature soft-serve, that is.

Among McDonald’s October dessert line-up is the Brown Sugar Sundae with Pearls, their vanilla sundae topped with a brown sugar syrup and brown sugar pearls. McFlurry, who?

It’s been available since 2018, but others might still not know that you can get your favorite icy cool treat in 4 milk tea flavors: Wintermelon Milk Tea, Okinawa Milk Tea, Caramel Milk Tea, and Chocolate Milk Tea. Plus, it’s loaded with pearls!

The Bubble Tea Cake of NBC Baking and Cake Decorating School is a potluck gem that probably won’t burst your milk tea bubble. It’s made-to-order and baked fresh every day.

Served in a 9-inch round tin can, the gourmet dessert made by Chef Jun Florendo stars a wintermelon cake topped with a sweet-salty rock salt and cheese frosting, a milk tea float, and tapioca black pearls in a rich kuromitsu syrup (a Japanese sugar syrup called “black honey”).

Satisfy your milk tea cravings even when you’re on the go. Use this GrabFood promo code for discounts.