MANILA, Philippines – Once upon a time in a land far away, a portal opened up in the sky and from out of it came a long mechanical arm. The mechanical arm dug up a piece of earth and took with it a nest full of eggs before retreating back into the portal. Angered, the birds used their sling shot to rocket themselves into space and so began their quest to take back what was rightfully theirs.

So goes the premise of the new game Angry Birds Space. Available today for iOS and Android devices, as well as the PC and the Mac. 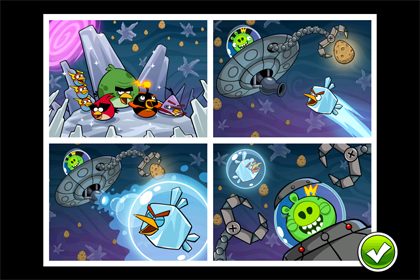 While the basic mechanics of the game of birds remain the same, you still blast the birds off a slingshot and knock down pigs and structures along the way – Angry Birds Space takes gameplay to the next level with plenty of new elements including using gravitational fields from planetary bodies which if used the right way will help you set up spectacular trick shots. The game also comes with a whole new line of Angry Birds that have new destructive powers. Ice Bird will debut in this game.

As I write this story I have only had about an hour or two to fiddle around with the game but its pretty clear that it is one I’ll be playing to sleep. The new gravitational pull of planets really does force you to change the way you plan your shots – projectile and angles aren’t the only consideration anymore. On some levels you don’t even blast your birds from one side to another side, you have them rotate around a planet. I found it cool that you could also blast your Angry Birds the other way. It gets tricky though as the game progresses and you have multiple planets and gravitational fields to worry about. Last March 8, NASA astronaut Don Pettit announced the upcoming game aboard the International Space Station. The video, which you can watch below also explains gravity and how it affects curved trajectories, the same challenge you have to deal with when playing Angry Birds Space. Rovio consulted NASA during the development of the game, ensuring the most education experience possible. NASA’s partnership with the Finland-based game manufacturer began over Twitter.

Angry Birds Space currently features 60 levels to unlock, free regular updates are in the pipeline. You can download the game on the iPhone and Mac Appstore and Android Marketplace starting today. Prices are as follows: iOS (iPhone/iPod touch $0.99, iPad $2.99), Android (With Ads Free, W/o Ads $0.99, Android Tablets $2.99), PC and Mac ($4.99). – Rappler.com