The arduous art of the chocolate taster 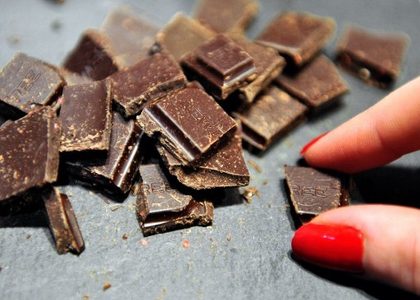 PARIS, France – First study the color, then the nose, the structure and taste: as for any good wine, tasting chocolate is both a treat and a serious art, requiring regular practice to fine-tune the senses.

And who better to offer a lesson in chocolate tasting than Pierre Herme, the French master pastry chef?

“You start by looking at the texture,” he explained at a recent tasting organized in Paris by the “Chocolate Crunchers’ Club” — a 150-strong fellowship created three decades ago to celebrate a common passion for the cocoa bean.

“I rough it up a bit first — crushing it to test its resistance,” Herme said, pressing a blade onto various parts of the chocolate bonbon on his plate.

Then comes the time to taste, paying close heed to “intensity, acidity, the lightness of the texture, the finish” — how the flavour lingers after each mouthful — “and for flavored chocolates the balance between the chosen aroma and the chocolate itself.”

Without forgetting the most important of all: “pleasure.”

Five times a year the club’s members gather around some of France’s top artisans to taste all manner of cocoa-based treats — from truffle bars to mousses, biscuits, patisseries and ice creams.

The ritual is always the same: each taster needs a small knife, a glass of water and some bread to cleanse the palate.

“The knife is essential, especially for chocolate bonbons,” explained Claude Lebey, the doyen of French food critics and one of the founders of the club, gathered for the occasion in a Paris mansion.

“You have to slice the sweets in two, to see the thickness of the coating. It should offer resistance, but should not be too thick either, or it stops you from tasting what is inside.”

Lebey confesses to keeping chocolate stashed away in various corners of his apartment so he can indulge in a quick nibble at any moment.

“Hmm, the coffee in this one is dosed just right,” he mused approvingly, sucking on a bonbon named “Brasilia”, created by Jean-Paul Hevin — a star Parisian chocolatier with his own stores in Japan and Hong Kong.

“It’s a dark chocolate ganache, but I added a bit of milk to bring out the scent of the coffee,” explained Hevin, who uses ground coffee from Colombia and Brazil — rather than instant as is often the case.

The club’s expert crunchers sample another bonbon, this one flavored with Earl Grey tea.

“The bergamot could be a little more pronounced,” reckoned one taster. “Yes — but that’s risky, bergamot will easily crush any other flavor,” tempered another.

For Hevin, “getting the right dose between different flavors is particularly difficult, it takes months of work.”

“Most often I will put the accent on the chocolate, above any other flavor.”

But sometimes, on a smoked tea bonbon for instance, he does the opposite: “I am a big tea fan, so on this one I pulled out the stops so you can really taste it. I wanted something more powerful, more virile.” – Agence France-Presse