Apr 7, 2012 1:03 PM PHT
Robert Uy
Facebook Twitter Copy URL
Copied
'The only reason for time is so that everything doesn't happen at once.' -Albert Einstein MANILA, Philippines – A recent addition to Philippine vocabulary is the notion of the “Senate Minute” aka “One Long Minute.”

We have heard our senators generously use this phrase at the impeachment trial. While seeming to attempt to prove Einstein’s Theory of Relativity (with the Senate’s notion of time being different from that of atomic clocks), it does nothing to help reduce the notion of Filipino time.

If at all, it actually provides justification to the rest of the population that a minute is not made of 60 seconds, hence “late” becomes a relative term. A minute gets distorted as easily as one’s image in a house of mirrors.

How important is a minute? Why should a measly 60 seconds matter? Or for that matter, every single second leading up to a minute? (Some of the following information comes from: http://sixtyseconds.info) Length of a second

Every second, 1.78 people die around the world, while 4.2 babies are born. Formula One pit stops have dropped in duration. Lewis Hamilton posted a breath-taking 3.4 second pit stop during the 2010 Malaysian Grand Prix. The 5-second myth states that 5 seconds is the amount of time a piece of food can lie on the floor and still be safe to eat. 7 seconds is all the time it takes to get undressed. 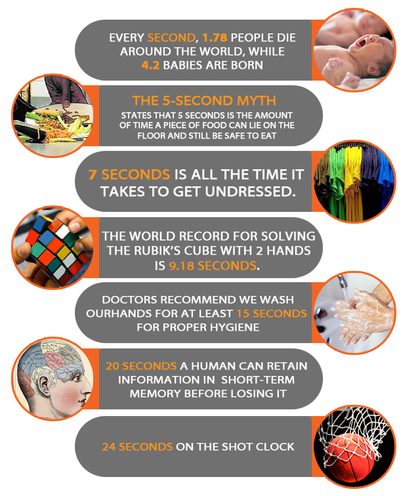 The world record for solving the Rubik’s cube with 2 hands is 9.18 seconds. Doctors recommend we wash our hands for at least 15 seconds for proper hygiene.

20 seconds is the amount of time humans can retain information in short-term memory before losing it. In basketball, all you have is 24 seconds on the shot clock. Looking directly at the sun for 30 seconds damages your eyes.

A 30-second TV commercial on network prime time in the Philippines could cost upwards of P100,000. Based on the Flag and Heraldic Code of the Philippines (R.A. 8491), the Philippine national anthem would be sung somewhere in the 60-second range.

Albert Einstein once said, “The only reason for time is so that everything doesn’t happen at once.” While humans wish for that to be true, reality is far from it.

A lot happens in 60 seconds. And the Net has just added more to the mind-blowing speed to which life adapted.

An infographic produced by Soci@l Jumpstart reveals just how much goes on in social media. The graphic was released on Feb 17, 2012. Given the acceleration of social media use, these numbers represent a snapshot in time.

A few things that happen in social media within 60 seconds:

American journalist and author Jim Bishop once wrote, “Nothing is as far away as one minute ago.” Today, even a second feels distant. And while facts and figures can sometimes get the best of our short-term memory, Easter is a great opportunity to remind ourselves of the real value of time.

As they say in Rappler, “Tomorrow begins today.” – Rappler.com