Following the brands’ success in Europe, South America, the Middle East, and the US, Uno de 50 chose the Philippines to host their first store in Southeast Asia. Jose Luis Pardos, Uno de 50’s Expansion Director, says Manila was not part of their expansion plans at first. But after talks with SM and getting to know the market more, they gave it a second thought. “We realized that the market is very alive, very vibrant. It is growing a lot.” (READ: Watch out! H&M, Pull & Bear, others to open in Megamall)

“Our success in the States can be interesting because we think the Filipino market is aligned with these consumers,” Pardos added.

What’s in a name?

Uno de 50 is described as a brand for “dynamic, cosmopolitan people who follow fashion trends.” At the same time, the brand values originality and exclusivity.

Uno de 50 started out in Spain. Its CEO Jose Azulay began his career in his family’s watch company, but after acquiring the necessary skills and professional know-how, he decided to put up his own business. He met a group of designers who were running the small design company of Uno de 50 by coincidence and he decided to buy the company after being impressed by the unique, handcrafted designs. 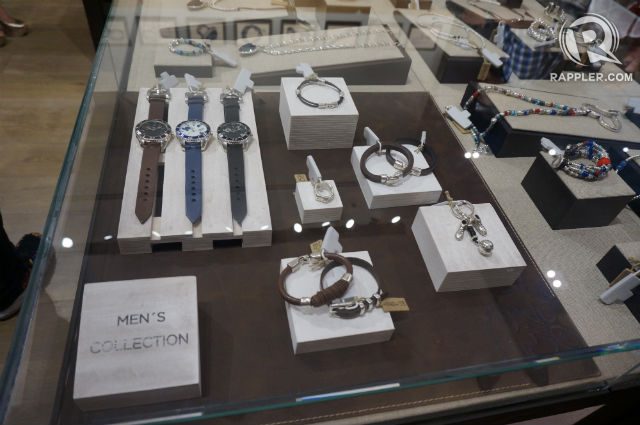 They used to make only 50 pieces of each design – thus the name which means “one of fifty.” However, after expanding to different countries, the brand definitely had to produce more than 50 per design. So to stay true to their tradition, the brand releases limited edition collections that consist of designs of only 50 pieces each – around 1 to 2 pieces per design are sent to each country where the brand has a store. In fact, since all pieces from the brand are 100% handcrafted, even regular pieces with the same design often have minor differences.

The brand has brought in its latest collection to its store in Manila  called “Jewels of the Meditarranean.” It consists of colorful pieces reminiscent of the islands and the water.

There are also pieces consisting of different colored stones and dyyed leather that will give you a feel places in the Meditarranean like Formontera, Menorca, and the Balearic islands. Colorful Swarovski and Murano crystals in varying colors reflect the blue sky and sea, while the red reminds you of the unique red soil in the island of Ibiza.

The store brand does charity work. It collaborates with companies and agencies that want to help out others in need. Currently, Uno de 50 is retailing specially-crafted bracelets to help people affected by the Rett syndrome.