Polecats Manila: Harness the power of the pole MANILA, Philippines – The word ‘sexy’ can be a controversial term, especially in a macho society like the Philippines where women — yes, in this modern age and time — are still expected and preferred to be mahinhin, mayumi and conforming to the Maria Clara mode.

There’s nothing like having a reality check in a room full of women on a mission to own their womanhood — especially if it’s a room with 10 poles, each matched to a woman who’s spinning, climbing and hanging in various positions. It is sexy, it is strong and men are not allowed to watch.

We are in the studio of Polecats Manila, where pole dancing lessons are offered and held.

It would be hard, even unrealistic, to disengage pole dancing from its sexy aspect. The half-naked bodies, flipped hair, overturned positions — they all make one assume uncomfortable ideas. Perhaps a little too prematurely.

CD nonchalantly comments, “Because of recent history, (pole dancing) has become a sexy thing. I’m not going to deny that. Although, the real roots are in gymnastics — like in China and India. But I’d like to think we put the right amount of sexy. We don’t have to gyrate or grind the pole.”

However, students are asked to come with an open mind and to make an effort to take a giant step out of their comfort zones.

“You know us, we’re so full of inhibitions!” CD laughs, “In the Philippines, you can’t be wild, you can’t be sexy. (Our classes) are the only times they can get to do that, without fear of judgment, without being shy. A lot of our first timers are shy; they come in t-shirts, big t-shirts and baggy shorts.”

She continues, “Later on, (you’ll see them wearing only a) sports bra and bikini bottom!” CD can’t help but laugh. “When I talk to students, (they say) it’s a great way for them to release, to feel free — without having to drink and dance at a club drunk.”

It’s the reason why men are not allowed during class hours. The hour on the pole is private time, a girls’ club of sorts that allows them to let loose without the fear of being under scrutiny or being self-conscious. The curriculum is customized by Polecats members themselves. CD explains that they had to put it together as none existed in the Philippines when they set their school up.

“It’s like ballet, or any other sport,” explains CD. “Before you move on to the advanced things, you need (a) foundation. So we made a curriculum based on our experiences, and we took classes and workshops abroad.”

The classes the Polecats offer are broken down into beginner, intermediate and advanced levels. Women from all walks of life have signed up: students, lawyers, doctors, office workers, housewives.

CD shares that her dream is to portray pole dancing along the levels of Cirque du Soleil, where it’s more about acrobatics than it is about sexy posturing. It’s a lofty goal, but not unattainable. In the meantime, though, there is a need to continue growing the classes and the school’s scope.

And to keep classes enjoyable — even if it means straddling that sexy line.

“You have to keep the students interested and the classes fun before you do the serious thing,” CD acknowledges. “So you have to do the hair flipping. I don’t think there’s anything wrong with hair flipping. It’s actually fun! When else are you going to flip your hair?”

But before anyone assumes that a pole dancing class is simply about teasing an audience and posing provocatively (if even, at all), one must think again. The work involved to get to the higher levels takes a great amount of determination and willpower.

More difficult classes introduce the “tricks.” More advanced students learn to work in pairs, and even carry someone else high up on the pole.

CD flippantly comments, “That’s hardly hair flipping already because at the level, you don’t need it!”

To go beyond hair flipping levels, a student must be ready to put in the hours, undergo repetitive practice and endure a lot of pain. In the beginning, the inner thighs must learn to grip the pole and squeeze hard to stay on. Then the pain moves on as the classes progress: to the elbow, the knee, the big toe. 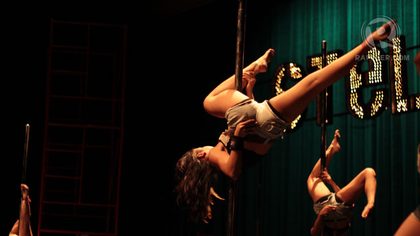 The most determined students laugh about the pain. They learn, along with their lessons, that it is part of the process. In time, they bear it better as their strength builds up.

Strong is the new sexy, says the meme. “That’s our slogan for this year!” CD excitedly reveals.

The lessons, she believes, help their students get stronger not just physically, buy also emotionally.

“It’s like, ‘I can’t do this now, but I’ll go back tomorrow and then I’ll try again. If I can’t do it again, it’s okay, I’ll go back again.’ It strengthens their willpower, determination and patience. And I think that’s really more important than the physical aspect — because you can apply that to the rest of your life.”

The Polecats studio is quite new, opening its doors only last April. While the classes have been going on in various dance studios in the last couple of years, having a real home — with really high ceilings — means that there is now actual room to diversify.

CD teases us with ideas of silks and hoops. The classes are yet to be planned, but the equipment is on its way, and the Polecats are ready to redefine their craft once again. – Rappler.com

The group had their recital last June 2 at the AFP Theater, and RAPPLER was there to cover. Standby for our story on the recital tomorrow!]