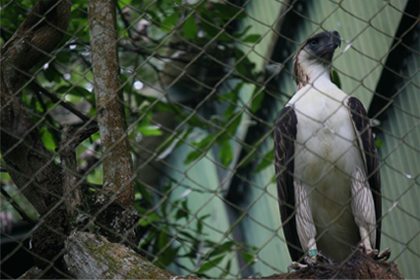 DAVAO CITY, Philippines – A young boy with big round eyes fiddles with the lower hem of his shirt as he closely watches a Philippine eagle, which was shot by a hunter, stumble and struggle for her life. The other children sitting beside him gasp as the hunter pursues the wounded eagle.

A product of a 14-year research, Pag-asa (Hope) is the first Philippine Eagle that was bred in captivity through artificial insemination and was hatched through incubation. Literally, the fragile eaglet that was hatched 20 years ago provided hope for the country’s effort to save and conserve these majestic creatures.

Eddie Juntilla has been working in the eagle center since the late 80’s, and he was assigned to take care of Pag-asa since Day 1. Through imprinting, Juntilla stood as the parent and, during mating season, the surrogate partner of Pag-asa.

“It’s part of my job nothing personal,” said Juntilla with a sheepish grin when asked how it feels to have an eagle as a partner.

As of January 2012, there are 35 Philippine eagles under the protection of the PEF inside the eagle center.

According to Anna Mae Sumaya, curator of PEF’s Breeding Program, there are 3 natural pairs inside the facility while there are 5 eagles that are imprinted to humans.

“Compared to the rearing method that we have applied with Pag-asa wherein he imprinted with his keeper and is dependent to humans, it is now our rearing protocol that the new eaglets should not see and associate their selves with any human,” said Sumaya.

PEF lately has been releasing eagles back to the their natural habitat in the wild. However, Pag-asa will stay in the facility.

“Pag-asa’s not releasable because he has imprinted and very dependent ot his keepr and he might pose danger to self or to others. That is why Pag-asa will stay here,” said Dennis Salvador, Executive Director of PEF. The struggle of the eagles

Salvador said that there are fewer than 400 pairs of Philippine Eagles in the wild across the country and 200 pairs are in the island of Mindanao.

The areas where Philippine Eagles still exist are in Samar, Leyte, some parts of Luzon and the mountain ranges of Mindanao.

“But we believe that the Philippine Eagles are already extinct in Leyte,” said Salvador.

Although human hunting and trapping are seen as factors in the rapid decline on the population of the Philippine Eagles, it is the destruction of the habitat that is identified as the long-term problem on the efforts on eagle conservation.

“That is why we have to position against deforestation and logging. Another problem is mining most especially large-scale open pit mining. Most mining operations and applications are on the identified habitats of the eagles. They dig and clear our lands in the expense of the communities and the future generations,” Salvador said.

Salvador, a veteran on eagle conservation, also said that the government should also take a second look in its policies.

“How would they balance this? At some point the government may say that we should push for eagle conservation while on the other hand they allow mining corporations to destroy the habitats,” Salvador said.

Presently, PEF is boosting up their efforts by strengthening community partnerships most especially with the indigenous people.

“Because law enforcement is not enough, we are trying to find other ways to deal with the communities. Aside from the information dissemination and education campaigns, we are also using conservation incentives with our partner communities. In Arakan Valley, North Cotabato, we provided a water system in the community as an incentive for their efforts in helping with the conservation,” said Salvador.

PEF, which is currently funded by sponsors from the private sector, recognizes that they need more resources to continue and strengthen its operations.

“Dapat pati government tumaya dito (Government should have a stake in this),” Salvador said.

The people cannot escape anymore on this call of duty to save what is savable and to protect what must be protected. And as the sun started to kiss the horizon on the day of Pag-asa’s birthday, children continue to goggle with sparkling eyes on Pag-asa as he statuesquely perches in a branch inside his cage.

A young tyke who is accompanied by his grandparents commented, “Ganahan man na sila molupad-lupad (I know they wanted to fly freely).” – Rappler.com