Filipino-Jordanian takes on a journey in art 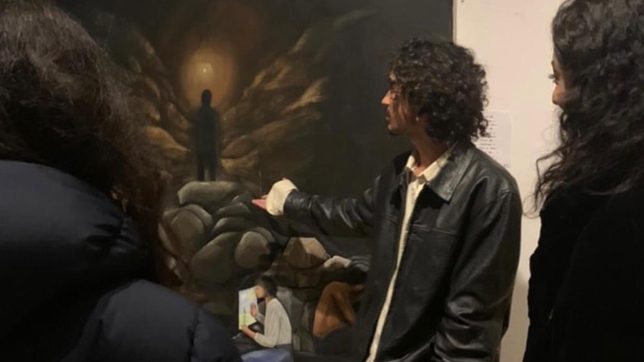 Jad Cordero shows some of his work during an exhibit.

Facebook Twitter Copy URL
Copied
‘Knowing that I have quite a base established in no time showed me that my hard work did pay off,’ says Jad Cordero

When he was 20 and a homeless college drop-out, a friend gave him $20 for food.

“Yet, I was having this urge to buy what I had always wanted but couldn’t afford, which was a canvas,” Jad Cordero, self-taught multimedia artist, told Rappler in an interview from Amman, Jordan where he is based in.

“And that’s how it all started,” said Cordero.

“I painted, and the next day somebody saw it and bought it from me for $50. That was the sign I needed to know: The risk I took in doing what I believe in was worth it; and I’ve never stopped believing since.”

These days, Cordero’s paintings have been selling online for as much as $2,000 apiece. He has his own art gallery, has held two exhibitions and has 11,800 followers on Twitter – something that, he said, “helps me believe in myself more.”

“Knowing that I have quite a base established in no time showed me that my hard work did pay off,” said Cordero, now 21 and second of 5 children born to a Filipina, who in 1990 met a Jordanian national in college at Far Eastern University in Manila. They got married a year later.

The family moved to Jordan from the Philippines when Cordero was 3 years old because his dad found a job as an electrical engineer.

Art as a journey

“What drove me into doing art is my urge to share the lessons that life has taught me during my journey: to help people overcome obstacles by simply embracing what they’re passionate about. I believe it’s the fastest way to grow. Art was also a tool for me to heal myself.”

“If I could label my theme, it would be ‘growth.’ I’m growing and learning more about myself with every art piece I finish; I learn one thing about myself and I deliver a message from that piece. That is the journey of my art and of myself,” said Cordero.

Cordero, who has grown to love the adobo that his mother, who grew up in Quezon City, would always prepare along with other Pinoy comfort foods, said he “feels great” having Filipino blood in him.

“I’m really happy about the fact that I’m half-Filipino. It shaped me into being curious about life, and honestly, it’s a privilege to me,” he said, adding that he has currently been learning to speak the language.

Cordero said there have been ups and downs.

“But I won’t stop making art; I never will. At times, I go days without eating just so I could afford buying materials; at times too, I can pay the rent and buy food to spoil myself,” said Cordero, who was pursuing a degree in management information systems, that his father had wanted for him at Al al-Bayt University when he dropped out to pursue art instead.

“I dropped out on my third year because it wasn’t something that I have ever imagined myself doing (in my life),” Cordero said, adding that he was “forced” to take the college course “because of my father.”

Cordero said he paints 10 to 16 hours a day, explaining that “my urge to create (works of art) and help people is what fuels me to accomplish all these things in a short time.”

“That’s how I was able to have two exhibitions and my own art gallery with the fact that I started out just very recent,” he said.

Cordero goes by the name, “Jad Maq,” where “M” is for Mahmoud, his father’s name, and “Aq” is for Aqrabawi, his family name. Cordero is his mother’s maiden name. – Rappler.com