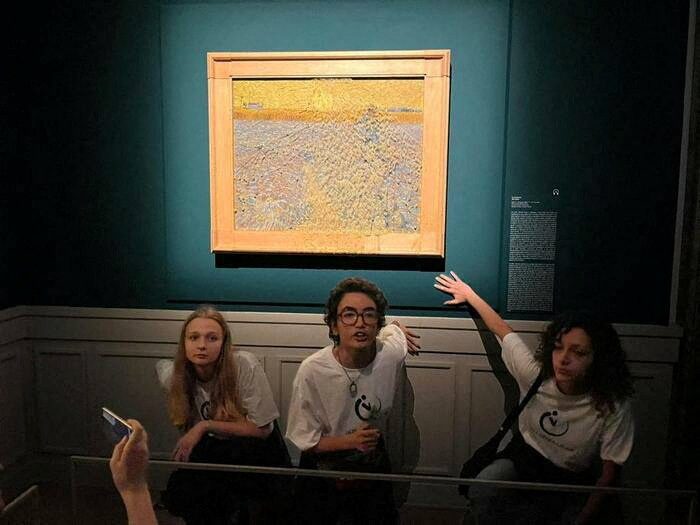 Activists of ''Ultima Generazione (Last Generation)" glue their hands to the wall after throwing soup at a van Gogh's painting "The Sower" at Palazzo Bonaparte in Rome, Italy, November 4, 2022. Arthemisia/Handout via REUTERS THIS IMAGE HAS BEEN SUPPLIED BY A THIRD PARTY. NO ARCHIVE. NO RESALE.

ROME, Italy – Italian environmental protesters threw pea soup over a Vincent Van Gogh painting on display in Rome on Friday, November 4 before gluing themselves to the wall of the gallery.

The stunt directed at The Sower was carried out by four women from the group Ultima Generazione (Last Generation) who shouted slogans against global warming and fossil fuels.

“These issues should be on the front pages of the news channels and political agendas every minute, but are instead only addressed with ‘scandalous’ actions like the one this morning,” the group said in a statement.

Italian Culture Minister Gennaro Sangiuliano condemned the attack on the painting, which comes after another Van Gogh work was targeted in London by climate change protesters.

“Culture, which is a key part of our identity, should be defended and protected and not used as a megaphone for other forms of protest,” Sangiuliano said in a statement.

Representatives from nearly 200 countries will gather in Egypt next week for the COP27 climate change conference, as pressure for tougher action to tackle global warming grows.

The Sower is part of an exhibition at the historic Palazzo Bonaparte in Rome’s city centre.

The painting, on loan from the Kroeller-Mueller Museum in the Netherlands, was protected by a glass screen and did not suffer damage, said Camilla Talfani, a spokesperson for the exhibition organisers.