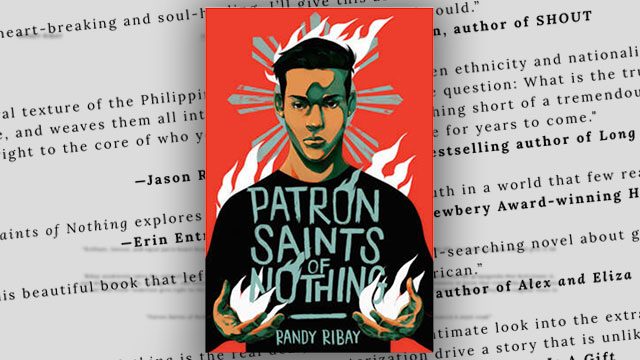 MANILA, Philippines – A few years ago, a young Filipino-American writer named Randy Ribay stumbled upon an article about the bloody “drug war” happening in his birth country, the Philippines.

“There was an immediate reaction of ‘this is wrong, there’s no due process, this is an abuse of human rights,'” Randy said in an interview with NBC News.

Upon reading about the thousands of deaths involved in the anti-drug campaign of the administration and realizing that many Filipinos supported the policy (including some of his own relatives) Randy was immediately driven to write his newest novel, Patron Saints of Nothing, a story heavily influenced by the bloody anti-drugs campaign.

Patron Saints of Nothing is about a Filipino-American teenager named Jay Reguero and the mysterious death of his favorite cousin, Jun, in the Philippines. Shaken by his cousin’s demise and the silence of his family on the matter, Jay decides to leave school, travel to his parents’ birthplace, and find out on his own what really happened to Jun.

“I wanted to position Jay as a learner,” Ribay said, adding that he wanted to write this book for the young Filipino-American generation – himself included.

“That was the primary audience in mind – Filipino American teenagers. Because I didn’t have that mirror growing up, I don’t remember reading a single book featuring a Filipino until I got to college,” he added, hoping that this novel would allow the younger crowd to connect with Jay’s search for his own identity.

Randy dove deep into research to depict Jun’s modern Filipino life before his death, having read various Western and Filipino sources, as well as traveling to the Philippines in 2017 to speak with a former Martial Law activist during the Marcos regime and a journalist who covered the drug war.

However, Randy also included the “softer, happy moments” of his family visit in Jay’s story, ensuring that international readers would not just read about the bad, but also of the good.

“There’s kind of this tendency to reduce that culture to only the most painful aspects of it, to reduce the Philippines to poverty or to the drug war,” he said.

“I wanted to include those moments that don’t necessarily add a whole lot to the plot but were quieter with his and share the joyous side.”

Patron Saints of Nothing will be released on June 18, under Kolika by Penguin Books.

Randy Ribay was born in the Philippines to a Filipino father and an American mother. He moved to the U.S. when he was a child, and grew up up in Michigan and Colorado. He has visited the Philippines from time to time since moving to the U.S..

He is currently a writer and an English high school teacher. He has written two novels, After The Shot Drops (2018) and An Infinite Number of Parallel Universes (2015) and various short stories. Randy says that his latest work, Patron Saints of Nothing, is his most personal yet. – Rappler.com