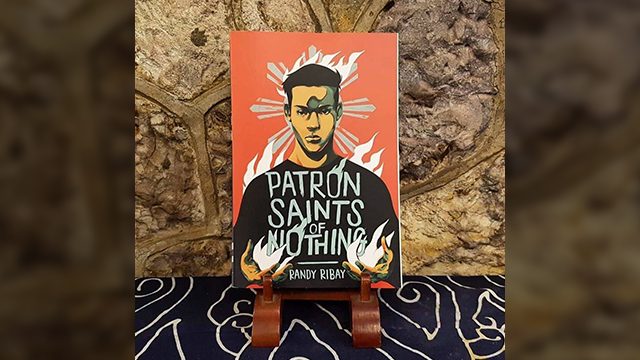 MANILA, PHilippines – Randy Ribay’s Patron Saints of Nothing, a young adult novel set in the milieu of President Rodrigo Duterte’s drug war, is a finalist in the 2019 National Book Awards.

Ribay joins the likes of Akwaeke Emezi, Jason Reynolds, Laura Ruby, and Martin W. Sandler, who are also finalists for the prestigious award under the Young People’s Literature category, according to an exclusive report by Vanity Fair.

Ribay, a Filipino-American, wrote the novel after he stumbled upon a news report on killings linked to the “drug war” or Duterte’s campaign against illegal drugs. (READ: Finding salvation through the patron saints of nothing)

“There was an immediate reaction of ‘this is wrong, there’s no due process, this is an abuse of human rights,'” Randy said in an interview with NBC News.

The novel is about a Filipino-American teenager named Jay Reguero and the mysterious death of his favorite cousin, Jun, in the Philippines. Shaken by his cousin’s demise and the silence of his family on the matter, Jay decides to leave school, travel to his parents’ birthplace, and find out on his own what really happened to Jun.

Ribay wrote the novel with the Filipino-American teenager in mind as the primary audience.

He was born in the Philippines to a Filipino father and an American mother. He moved to the U.S. when he was a child, and grew up up in Michigan and Colorado. He has visited the Philippines from time to time since moving to the U.S..

Ribay is a writer and an English high school teacher. He has written two novels, After The Shot Drops (2018) and An Infinite Number of Parallel Universes (2015) and various short stories. Randy says that his latest work, Patron Saints of Nothing, is his most personal yet. – Rappler.com