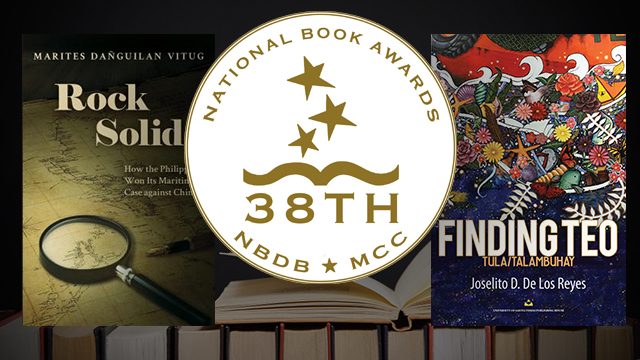 The winners were announced by the National Book Development Board (NBDB) through its official Facebook page Monday night, November 4.

In 2016, the Philippines overwhelmingly won a historic case versus China over the disputed parts of the South China Sea. Rock Solid is the first book to tell the story of the victory, from the point of view of the Philippines.

Relying mainly on original documents submitted to the tribunal and made public for the first time, Vitug’s book tells of the hurdles that a small country like the Philippines had to overcome in suing the regional power that was China.

De Los Reyes’s biography of Filipino poet Teo T. Antonio is considered a radical project because, in the Philippines, literary writers rarely become the subject of such genre – politicians, actors, athletes, and other types of celebrities do.

In Finding Teo, the author’s love for both poet and poetry is evident. He introduces Antonio, one of the most important writers of his time, to a wider and younger generation of audience with the popular language and approach that have also made De Los Reyes a widely-followed personality on social media.

The National Book Awards are organized by the NBDB with the Manila Critics Circle. The annual awards, according to the NBDB website, are “annual tributes to excellent books written, designed, and published in the Philippines.

You can find the complete album of winners here. – Rappler.com