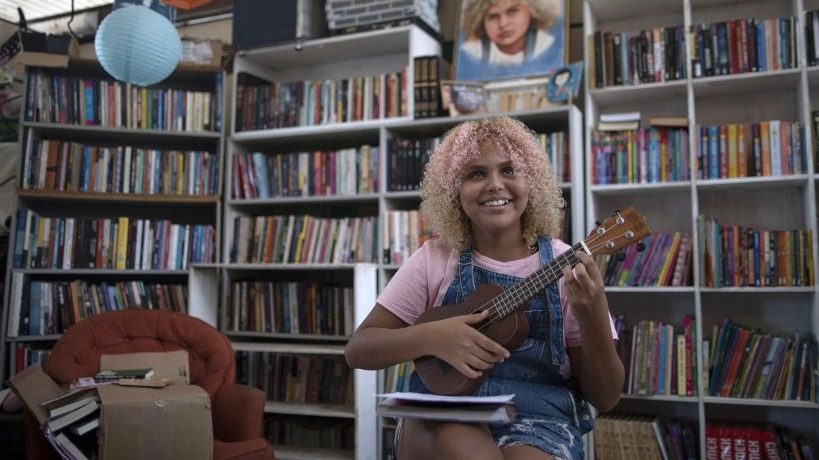 RIO DE JANEIRO, Brazil – Lua has a hungry look on her face as she holds her new book on Nelson Mandela, one of thousands the precocious 12-year-old has amassed for her new library in a poor Brazilian favela.

“I don’t read books. I devour them,” she says in Rio de Janeiro’s Tabajaras neighborhood, a shantytown perched in the hills overlooking the chic districts of Copacabana and Botafogo.

In a small tin-roof room at a local community center, she has amassed a collection of 18,000 books, hoping to help other residents access a world that can be all too remote from Brazil’s impoverished favelas.

“Lua’s World,” she calls the library, a cozy space lined with pillows and full to the brim with carefully arranged rows of books.

But Raissa Luara de Oliveira – her full name – has her feet firmly on the ground.

“At 12 years old, I’ve done more for my neighborhood than you’ve done in your whole term,” she recently told Rio’s mayor, the far-right evangelical pastor Marcelo Crivella, in a defiant video she posted online.

From favela to fame

The idea for the library was born 6 months ago, when Oliveira was at a book fair.

“I saw a mom telling her daughter she couldn’t afford to buy her a book for 3 reals (about 60 US cents),” she says.

“I said to myself, ‘You have to do something.'”

Then, pretending to be her grandmother, she sent a message to the vice president of the local community association, asking her to give her a space to create a library.

The woman, Vania Ribeiro, guessed right away it was Oliveira. But she agreed to the plan.

“When I found out she was doing all this behind my back, I scolded her,” says Oliveira’s grandmother Fatima, 60, a seamstress who has raised her since she was a baby.

“But after that, I supported her all the way,” adds the woman Oliveira calls “Mom.”

Her project is so successful it has been receiving around 1,500 books a week – way more than her small library can hold.

Behind the shelves, she has boxes full of books she wants to donate to similar projects elsewhere in Rio and in Brazil’s poor northeast.

“A boy in Piaui state told me I had inspired him to open a library for the children in his city. I set aside 500 books for him, but we need money to send them. I’m going to make another video to ask for donations,” she says.

Next up: puppies, kittens

The library is a hit with children in the favela.

“I love coming here. I come almost every day. It gives me something to do when I’m not at school,” says 10-year-old Daniel Couto Nascimento, relaxing on a big cushion and reading a comic book.

“I used to just spend my time playing football and video games.”

Oliveira didn’t used to be a reader, either.

But when she was nine, a teacher introduced her to Diary of a Wimpy Kid, American author Jeff Kinney’s cartoon novel on the pre-pubescent angst of middle school.

Now her reading list includes big, serious books on subjects such as racism and religious tolerance.

“I’ve seen my father get slammed against the wall by police just because he’s black,” she says.

“I’ve been called ‘voodoo girl’ online by a guy who claimed my hair is this color because I stole it from Europeans,” she said of her blond-tinged curls.

Attacks like that just inspire her to keep doing what she’s doing, she says.

Her next project? Open a shelter for stray dogs and cats in her favela. – Rappler.com