Facebook Twitter Copy URL
Copied
Jose was confined at the Makati Medical Center, where he was scheduled for an angioplasty 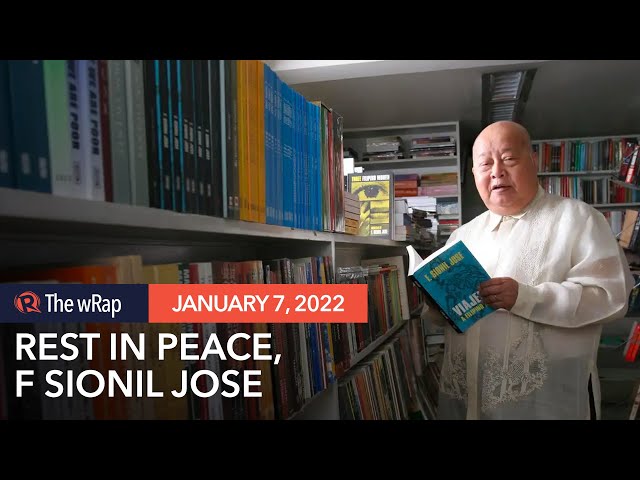 His death was announced by the Philippine Center of International PEN (Poets, Playwrights, Essayists, Novelists) in a Facebook post. According to the post, Jose was declared dead at 9:30 pm at the Makati Medical Center, where he was confined ahead of an angioplasty on January 7.

Just hours before his death, Jose took to his own Facebook page to post what would become his final words.

“Thank you brave heart. There are times when as an agnostic I doubt the presence of an almighty and loving God. But dear brave heart you are here to disprove this illusion, to do away with the conclusion that if you doubt Him, you kill Him. I cannot kill you dear heart; you have to do that yourself,” he wrote.

“For 97 years you have been constantly working patiently pumping much more efficiently and longer than most machines. Of course, I know that a book lasts long too, as the libraries have shown, books that have lived more than 300 years. Now, that I am here in waiting for an angioplasty, I hope that you will survive it and I with it, so that I will be able to continue what I have been doing with so much energy that only you have been able to give. Thank you dear brave heart and dear Lord for this most precious gift.”

Jose was known for the Rosales novels, a five-part series that follows a family throughout three centuries of Philippine history.

Mass, the final novel in the series, earned Jose one of his five Palanca awards.

He was named National Artist for Literature in 2001. Before that, he had already won a number of prestigious distinctions, including the CCP Centennial Honors for the Arts in 1999, and the Ramon Magsaysay Award for Journalism, Literature, and Creative Communication Arts in 1980.

He founded the Philippine chapter of PEN in 1958.

He was also a lecturer and owned the bookshop Solidaridad in Padre Faura, Manila.

In his later years, he maintained a column at The Philippine Star, where he wrote sometimes inflammatory critiques on Filipino society, culture and politics. – Rappler.com