[Two Pronged] Should I leave my wife or my girlfriend? 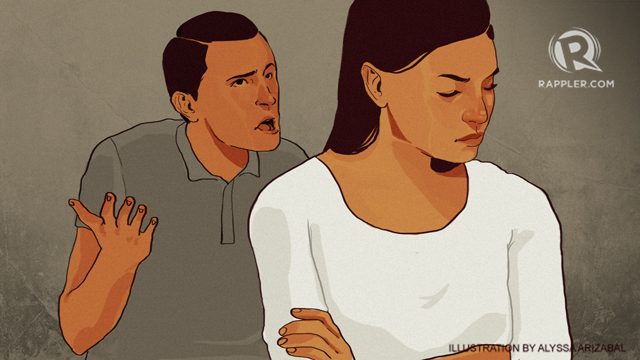 Facebook Twitter Copy URL
Copied
After marrying his girlfriend because she was pregnant, Anon asks if he should leave his wife and unsatisfying marriage for another woman

My wife and I got married when she got pregnant. I chose to be with her because of our daughter but the love that I feel for her has been declining.

I struggled so much just to keep the marriage but I always ended up with the thought of wanting to get out of it. During my years with my wife, I’ve realized that I have no dignity: I do not have my own money even if I have my work, she just gives me a weekly allowance and I would have to ask for additional if I want to go with friends on night outs. She makes the big decisions and never asks me my opinion. I think it is because she earns more, that is why she makes the call. She does not want me to go out with friends and rarely allows me to go out, but will remind me to go home as early as I can, around 10 pm at the most.

I never really go out regularly with my officemates and friends. In fact, my life revolves around family – bahay, at office lang ako (I only stay at home or my office).  I never pursued any interest knowing that it would add to the family expenses and she never encouraged me. She always tried to convince me indirectly not to pursue those interests by being cold towards me and unsupportive. I feel like I’m stuck with her and there is no way to grow. I feel like I’m less of a man because of our marriage.

I met someone else and I want to be with her.  I am losing my head over this. I am just so emotional and depressed about it. Please help me. I need to end this madness.

Yours is unfortunately a common predicament. You got married because you got your girlfriend pregnant and for the sake of your child – not exactly a glorious declaration of undying love for the woman about to become your wife. The outcome of shotgun marriages is uncertain; being willing to sleep together does not after all mean that the couple are suited for the altar. Sometimes the relationship is already mature enough to give marriage a reasonable chance. Other times, a forced marriage simply reveals the irreconcilable differences and engenders a deep sense of oppression. Then again, pre-existing beliefs like a strong sense of moral responsibility, a deep faith in some form of supreme being or a strong adherence to a cultural practice such as arranged marriages can sustain even the most superficially unsuited couples.

Perhaps oppression set the tone for your subsequent life as a second class citizen within your marriage. You say that although you work, you rely on an allowance from your wife for your expenses, she takes all the major decisions, and frowns upon anything approaching independence on your part. However, you singularly fail to reveal why she wants it this way or indeed why you allow it. Perhaps she is punishing you for condemning her to a joyless marriage and you are expiating your “sin” of impregnating her. Of course it takes two to create a child and each of you must bear some responsibility for the pregnancy – but again, you have spared us the details and we can only (probably unhelpfully) surmise.

As for the future and your thoughts of leaving your wife, what has changed since you decided to get married in the first place? You opted to marry not for love but for your daughter’s sake. Why is this reason no longer sufficient? And if you do leave, will this not constitute a betrayal of your daughter?

Of course, one can argue that you have now come to your senses and realized that to marry for the reasons that you did was simply wrong from the outset and it is never too late to rectify matters. This way you can justify leaving and pursuing your own happiness, whether with your officemate or, if that doesn’t prosper, someone else.

Ultimately, your decision will be based on your own view of the ethics and morality of your situation, which of course you know much better than we do.

Thank you very much for your letter.  In addition to what Mr Baer has stated above, I would just like to share a few issues you may have forgotten or missed when convincing yourself that leaving your wife is the best thing for you to do.

There is nothing wrong with thinking that. In my opinion, there is nothing wrong in actually doing it, if the reasons you cite for doing it are accurate. However, sometimes in our desire to convince ourselves that leaving is the best thing to do, we conflate different aspects of our marriage together in a way that doesn’t actually fit.

EXAMPLE 1: Your first sentence in the second paragraph of your letter is: “My wife and I got married when she got pregnant.” Well and good, in that these are facts that can easily be checked: 1. That you actually got married, and 2. That she was actually pregnant.

What cannot be checked and but easily becomes the “reason” many men use to break up with their wives is that they never wanted to marry her in the first place; that they were “forced” to do so.  This is, of course, hindsight.  Admittedly, just because it is hindsight does not mean it is not accurate.

As Mr Baer wrote: “Of course it takes two to create a child and each of you must bear some responsibility for the pregnancy.”  However, in my clinical experience, it is most often only the woman who is expected to bear the responsibility.

There are two obvious reasons this is unfair: You could have used a condom or borne more responsibility for birth control.Your wife is not like Jesus’s mom, Mary, capable of immaculate conception. This needed a man’s contribution and that man was you.

In addition, you did not have to marry her, despite how much pressure was heaped upon you to do so.

In other words, by all means leave her if you feel your relationship is over and can no longer be resuscitated, but please don’t make one of your reasons for doing so something in the past that many men seem to forget would not have happened if they were not complicit.

EXAMPLE 2: The more current reasons you give for wanting to leave your wife are you have “no dignity, no opportunity to grow,” etc.

Well and good as long as you did something to change the situation. If you didn’t, and thus gave the impression that you had no problem with how the situation was or is, then it would quite unfair to lay all the blame on her doorstep.

Perhaps I am being unfair and you did make your feelings known and you did tell her that you want an opportunity to grow, for example. But you make no mention of having done so.

In fact, a statement like, “I never pursued any interest knowing that it would add to the family expenses and she never encouraged me” – just because she didn’t encourage you does not mean she stopped you from pursuing your interests. Of course, it would have been much better if she had, but, Anon, she is your wife, not your mother.

You also wrote: “She always tried to convince me indirectly not to pursue those interests by being cold at me and unsupportive.” What does indirectly really mean, Anon? That you interpreted what seemed like coldness to mean she did not want you to pursue said interests?

If you did directly make your feelings clear about how you felt, she may have not realized that some of her behaviors stopped you from doing what you wanted.

Your silence might have given her the message that all was okay – or that you were displeased but, in the end, you could live with it.

If your protests were not clear and direct, is it logical to blame her for not knowing she came across as not supportive?It seems somewhat unfair for you to blame only her, don’t you think?

I do not give these two examples to convince you not to break up with her. I just want you to be aware that her seeming faults may have a lot to do with you not being responsible enough to share your true feelings.

How will my telling you all the above end this madness and depression you feel?  Not easily and not quickly. In fact, it may hurt a lot more before it gets better. That is because the truth hurts, but usually will be the only way you can set yourself free – free to be with the woman you choose, because you know you gave your marriage your best shot yet it was still not enough.

In truth, my gut feeling is that you are right in saying your marriage isn’t sustainable, but because you know that it is not for the reasons you gave, you feel unmoored and uneasy.

But there is light at the end of the tunnel, I promise you. And this light will shine more quickly and surely when you start grappling with how your behaviors may have contributed to your marriage’s demise. It will not be easy, but it will be worth it.