[Two Pronged] Boyfriend with another girlfriend broke up with me 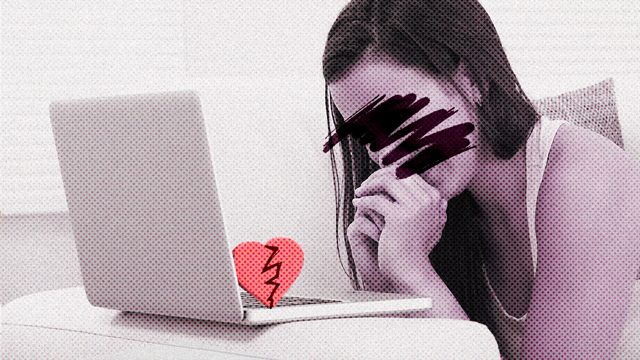 Facebook Twitter Copy URL
Copied
'He treated me well, though he never really committed to me or promised me a serious relationship'

I am a 39 year old female. My 25-year-old boyfriend of 9 months broke up with me two weeks ago. He was my colleague, based in another country. We had a long distance affair. I knew at the start, he had a girlfriend of 5 years, but he was persistent.

Our mutual attraction was too much to resist.

As the months went by in our “relationship,” he never talked about his girlfriend. I was told by mutual friends that he rarely met up with her, even if they live near each other. He never made me feel like I was just his other girl. He was very honest with me, and spent more time on me than the girlfriend.

He messaged and called me regularly.

We not only had sexy times, but also emotional conversations. We also have pet names for each other. He was planning to come here to see me, but then the pandemic happened.

He treated me well, though he never really committed to me or promised me a serious relationship.

He broke up with me because I told our common friend how serious our affair was, and this common friend sort of scolded him about the complicated situation he was in. It became too much for him so he decided to end it with me.

He said I mean a lot to him and he cares about me, but he can’t keep on with our relationship because he’s hurting us both. He also said that he cannot give me the attention and affection that I want, because I was always demanding more time from him. Never did he mention that he loved the girlfriend and that he was guilty of cheating.

I tried breaking up with him several times before, but he didn’t agree. That’s why I’m shocked that now he wants to end it.

I really just want to understand his behavior.

So you started a long distance relationship with someone, blithely ignoring that he already had a long-standing girlfriend. You were happy to accept all his assurances that you were the chosen one (despite the fact that he never broke up with her).

Yet you were surprised and sad when he broke it off after 9 months, despite the fact you had tried breaking up with him several times before but he wouldn’t agree. You do not say why you wanted to end it, nor do you explain how his refusal to agree prevented you from going ahead and ending it anyway (it’s not exactly difficult to end an LDR unilaterally).

So what could possibly explain why this breakup, which you yourself tried to initiate earlier, should shock you? Possibly, it is a case of wanting to be in control and being thwarted by his preemptive decision.

As for wanting to renew the relationship, consider a) he still has his girlfriend b) he may have a number of other LDRs on the go (exchanging messages, calls, pet names etc.) and c) he clearly doesn’t want the complication of a serious relationship.

So pursue him if you just want a bit of fun; but move on if you want more than that.

Thank you very much for your letter. You asked several questions about your LDR friend “Allan” and wish me to interpret some of his behavior.

I’m sorry but I cannot do that. I have heard nothing from him, but only from you. Even if I believe that you believe everything you’ve told us, (which I do), it is unethical for me to read Allan’s mind, which is what I’d be doing if I dared psychologize him sight unseen.

Instead, I would prefer interpreting some of your behavior so that you understand a bit more deeply why you did what you did and can decide whether you want to continue down the same path with other relationships you have or not.

There are some things you said about him that make me wonder the basis for your conclusions. In other words, how do you really know that what you told me is true?  Example: “He was very honest with me, and spent more time on me than the girlfriend; he rarely met up with his girlfriend, even if they live near each other.” You mentioned that your mutual friends told you things about his girlfriend.

First, your friends don’t sound mutual in that they care about both of you equally. I feel they care about you more than they do about him, since their interpretations make you feel good, whether they were true or not, thus leading to your feeling you had more of a chance with him than you really did.

Some grade school teachers (and alas, some from grad school too) like to say: “Don’t assume, that makes an ASS (of) U (and) ME”

Dearest Lucy, I definitely don’t think you are an ass, but perhaps a wee bit more hopeful than evidence warranted.  Neither do I think he was necessarily a cad, but I honestly don’t know.

In your final paragraph, you ask: “Do you think I have a chance of getting him back, even if only with the same arrangement that we had?”

Again, I don’t know but my question for you is, “why would you possibly be ok with yet another time?”  If you write to us again, I promise you, Mr Baer and I can probably come up with more palatable options for you in the long run.