[Two Pronged] My friend’s partner is hitting on me – again 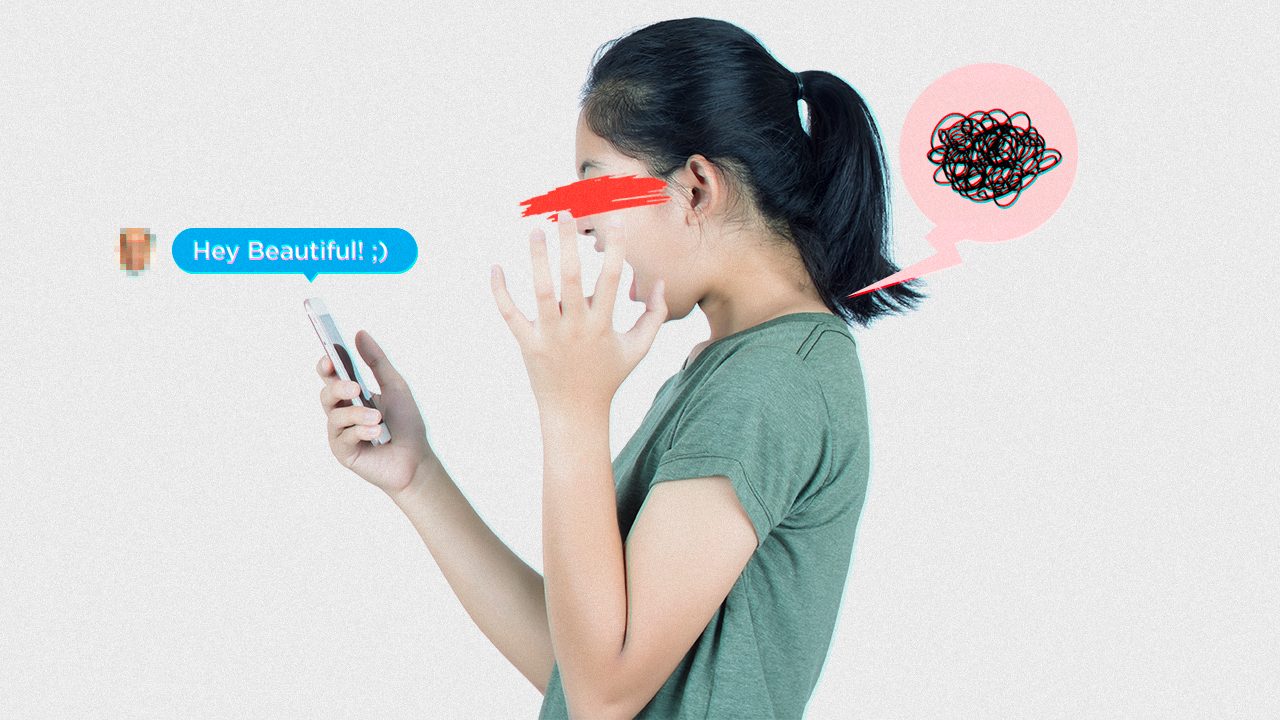 Facebook Twitter Copy URL
Copied
She once lost her friend because her then-boyfriend made a pass at her. Years later, they're friends again – and he's trying to come onto her again.

I am Filipina, married, living in Canada. With this pandemic, former classmates have initiated Zoom calls and I reconnected with Alena, my best friend, with whom I fell out with when I told her that her then-boyfriend “Rex” was coming on to me.

He denied it, she believed him and not me. She agreed to let bygones be bygones. I am happy we are friends again, especially since she is recovering from breast cancer surgery.

Rex, now her husband, constantly likes my FB posts, has begun sending PMs telling me how pretty I am. Being polite, I thank him but always bring back the conversation to Alena.

Now he says things like before, saying my pictures have an effect on him, that he hopes it’s okay calling me gorgeous, etc.

His behaviors make me feel he is again making passes at me. My disgust is more intense because why has this person who has been outed, dare come back and do the same?

I unfriended and blocked him but I am still being bothered. At a timewhen Alena needs him most, he is fooling around again and putting me in a difficult situation.

After what has happened the last time, I can’t even talk to her about this. I already know I will be blamed over this. It is hard to divulge it to Alena because she’s in a delicate situation. She is still recovering from her surgery.

What should I do? It bothers me why he would think it is okay to subject me in this situation again. I am beginning to have self-doubts. Am I giving wrong signals? How do I handle this?

It must be dispiriting to find yourself the subject of Rex’s advances once again, especially so recently after having renewed your friendship with Alena. It must also be dispiriting to know that the obvious solution – tell Alena – is a non-starter because it didn’t work last time and in addition she is in no condition at present to deal with this.

You say you have blocked and unfriended him but this clearly has not dissuaded him. However, you don’t tell us how he is bothering you and how he is putting you in a difficult position.

So how are you to retain your recently renewed friendship with Alena in the face of this problem? Perhaps the important thing to emphasize is that you don’t have to. This is a “best friend” who has already refused to believe you once when confronted with the knowledge that Rex, even before he was elevated to the status of husband, was fooling around and who you already admit in advance will do the same thing this time. Is this truly the sort of best friend you actually want to keep, someone who values you so little and exposes you to her predatory husband by closing her eyes to his behavior? Give it some thought.

In the meantime, you may need to set up some defenses.

First, thanking Rex for complimenting you is probably not the best way to get rid of him and also not the best way to show how you have consistently rebuffed him. Give some thought to any other ways in which “polite replies” might be misinterpreted. Then, start to keep a complete record of each and every contact you have with him, whether via Facebook, PM, Viber, the lot.

If the contact is not in writing, make as accurate and complete note of what was said. Needless to say, any photos and/or videos should also be retained. These may never be needed but there is some comfort to be derived from having them available should the need arise.

Finally, one other reason for considering ditching your so-called best friend is that just as Rex seems to have stopped bothering you once Alena and you fell out, it is likely that the same thing will happen this time round.

I admit Mr Baer’s suggested solution – to drop Alena as a friend – never entered my mind, but just because it didn’t doesn’t mean it doesn’t make sense. It is certainly one way to deal with what Mr Baer thinks is the source of your problem. He is right, in a way. Without Alena, there would be no Rex to bother you.  However, that is like throwing the baby with the bathwater sine your friendship with Alena seems so important to you.

I suggest you stop angsting about what an a**hole Rex is. It’s almost like you are patronizing Alena, outraged for her that she has no clue what Rex is like.

Dearest Emily, we do not know how much she needs him and if you truly love her, you will accept that he is the man she has chosen to be with. No need to welcome him with open arms, but no need to cut him dead either should Alena be with both of you.

But you can certainly do so when she is not around. In fact, your decision not to have anything to do with him is the right one. He seems the sort of man who will mistake your outrage as a come on, saying insufferable things like: “You are even sexier when you are angry.” Definitely, however, do not have any contact with him unless Alena expressly wants or expects you to be with them in the future.

The wrong signal you may have given is NOT being twice shy, once bitten.

People do not usually change, especially if his behavior was not punished – some might even say it was “rewarded” in the past. I will presume that, any fault you may have had was due to your being too trusting without any basis for that trust. Rex gave no indication that he had changed, and Google is replete with articles about how men see come ons when none exist. Men also have different thresholds for perceiving sexual intent.

Perhaps, it is best to err on the side of caution next time? Not only with Rex, but with other men? And in the unlikely event that you might miss out on a terrific platonic friendship because of this caution, big deal. I presume your friendship with Alena means more than any possible relationship you may have with a guy.

All the best and good luck,