Facebook Twitter Copy URL
Copied
A self-described dreamer, the designer from South Cotabato talks about achieving his dreams and how to use Filipino textile responsibly

Jearson Demavivas is no stranger to the pageant world. Even before Miss Universe 2018 Catriona Gray wore his outfits, the 29-year-old designer from South Cotabato already worked with Binibining Pilipinas Grand International 2017 Elizabeth Clenci, who wore his national costume inspired by the T’boli tribe.

Since then, his designs have been worn not only by beauty queens but a number of personalities. What is unique about his designs is the use of Filipino textiles, mostly from Mindanao.

Rappler sat down with the designer at his shop in Makati to talk about his beginnings, Philippine textiles, and how pageantry has helped in promoting his work.

Jearson describes himself as dreamer. He never thought he would be where he is now because of the hard life he endured in the province. The youngest of 3 siblings, Jearson took care of his two siblings who are mentally challenged.

“May mentally retarded akong brother and sister. When I was in high school, ang hirap mangarap kasi sabi ko, how do I pursue my dream?” he said.

(I have a mentally retarded brother and sister. When I was in high school, it was hard to dream and I told myself, how do I pursue my dream?)

With his family problems, Jearson found hope in sewing clothes. Soon, word reached how good he was and he began competing in local competitions.

Later on, Jearson finally had a chance to go to school, thanks to his aunt and uncle. The catch? He had to move to Manila.

Pushing his hesitations aside, Jearson moved to Manila and enrolled in the Fashion Institute of the Philippines when he was only 19. Even if his aunt and uncle were paying for his school, Jearson still took on odd jobs on the side – hair salon assistant among them – to make ends meet. After graduation, a friend encouraged him to try his luck in the 2010 to 2011 edition of the Mega Young Designers Guild Fashion competition.

“My classmate, he sent me information to audition for the Mega Young Designers Guild Competition. Because he told me, ‘Your talent is perfect for the reality show.’ You can make the dress in, say 3 hours, whether it be a gown or what. I’ve always been under pressure when I was in the province,” he said in a mix of English and Filipino.

“Eight hours to make something is easy. Actually, that’s a lot of time. I can make outfits in 4 hours,” he added. He ended up as the 1st runner-up in the contest.

Doors slowly opened for Jearson in both the fashion and pageant world. For his first Binibining Pilipinas outfit, he dressed up a young Elizabeth Clenci. His costume for her in 2011 won Best in National Costume.

Jearson would once again work with Liz in 2017 for the Miss Grand International national costume segment.

For Jearson, dressing up ladies in the pageant scene has opened more opportunities, including getting his name out in the fashion industry.

(Pageantry in the Philippines is a big deal. Although we have a 4th Miss Universe already, it’s still a big advantage if you started like dressing up the girls. It boosts your name when you’re starting with this.)

(There’s a pageant here almost every month… we have so many titles, so many competitions. What’s great about this is if you want to be known, you can start here. It’s exposure. Pageantry is a huge step if you enter fashion design as a career. Your mind is challenged to reproduce the different designs and styles.) Proud to use Philippine textiles

For Catriona’s Miss Universe run, Jearson, together with members of Catriona’s team made sure to secure permission to use the fabrics of the T’boli tribe. They traveled to Lake Sebu to get the tribe’s blessing – which they got, along with the team’s assurance that it would not be disrespected. (IN PHOTOS: Catriona Gray’s Miss Universe 2018 national costume)

“What Cat wanted was that every cloth, every material would be authentic. [So] for the respect and the video clips that we needed, we really had to go to the place,” he said. Jearson takes to heart the importance of using Filipino textiles in the right context. He recalls a time when he was bashed for the national costume he made for Elizabeth Clenci.

The issue then was because Elizabeth’s attire showed some skin. The T’nalak is considered holy. Jearson defended himself – he did, after all, understand the culture and context of the fabric.

“I know my province [well]. There was journalist from Davao who critcized and tried to put me down because he did not know I was from there or that I know my culture. He apologzied afterwards,” he said.

After Catriona’s stint in Miss Universe, Jearson, like designer Mak Tumang, creator of Catriona’s evening gowns, got a tone inquries. The dress she wore to during a meeting with Thai Princess Sirivannavari Nariratana was one of the most popular outfits – 3 people have already ordered it. Aside from Catriona, Jearson has designed for other personalities such as Angel Locsin, Eula Valdes, and sports journalist Dyan Castillejo, who wore one of his outfits to cover Manny Pacquiao’s most recent fight.

Challenges in using textiles and what’s next

Even as Filipino fabric and textiles get even more attention, there are still challenges that need to be answered.

“If it weren’t for the culture of these tribes, we can’t produce this kind of beautiful fabrics. In this little way, we respect that. When we design, we have to be sensitive of their culture,” he added. 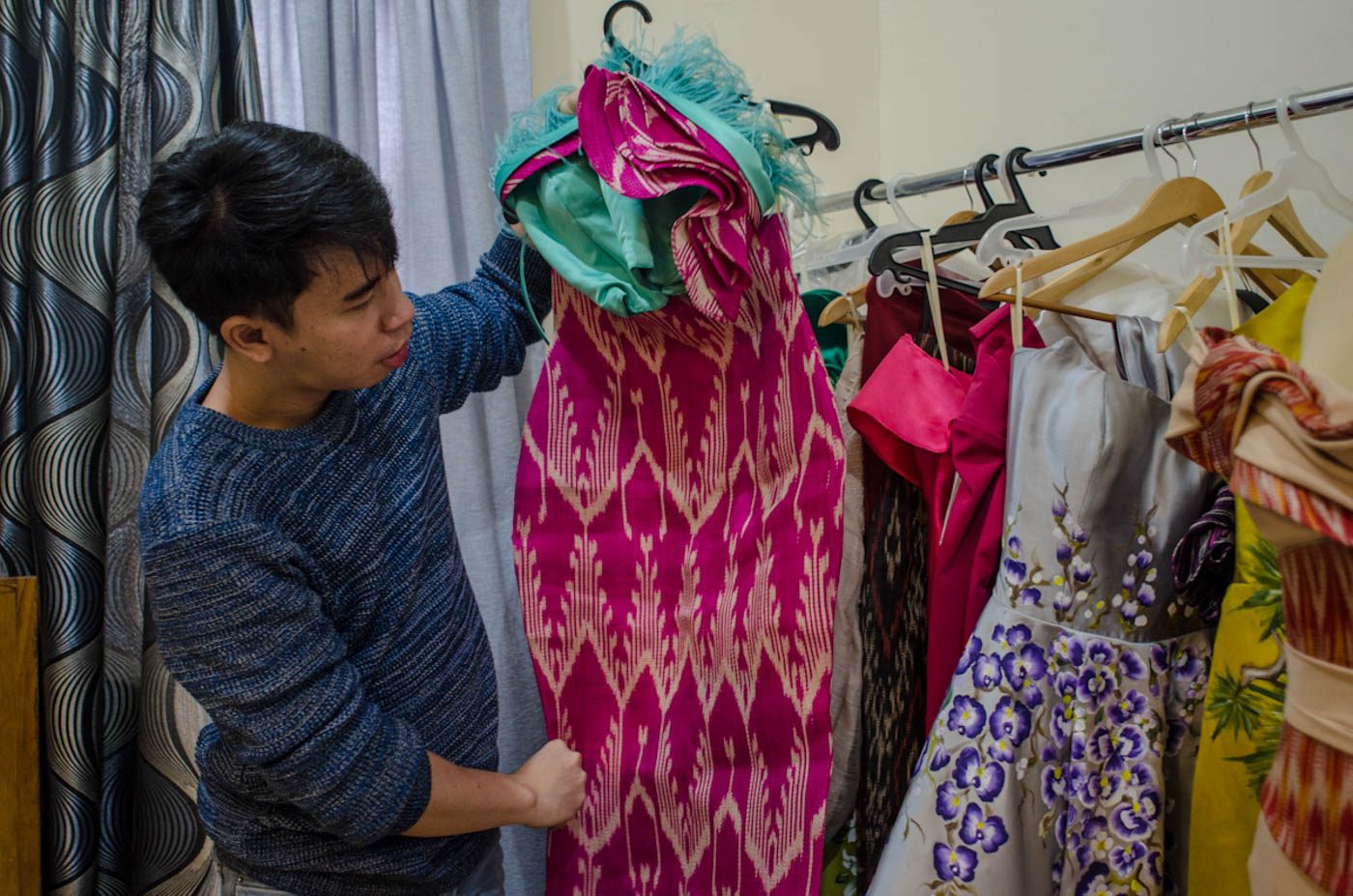 Jearson said he wants to continue promoting Philippine textiles in his own little way.

“I want to continue this kind of legacy. It’s a way to be known. We have a rich culture in the Philippines and we deserve to show it to the world how rich it is.  Because I said, in this way, we support the indigenous people because this is their livelhood and we can help them in our own simple way.”

“My goal this year is I want something that everyone’s going to wear, everyone can buy. You can represent the Philippines outside of the country. Even in malls, you can go to this store you can find Filpino fabric…  you can wear a t-shirt or you can wear a skirt with prints of t’nalak. That’s my goal, to mass produce Filipino textile.”

As for criticism, Jearson said: “Actually, I’ve read a lot of criticism and I’m immune to it. You know what, the thing here is… only putting in your mind that you worked a lot and I worked hard for this… We know we cannot please everyone … we just don’t mind them,” he said in a mix of English and Filipino. Looking back, Jearson sees clearer the importance of never giving up on his dream to be a designer.

“I’m grateful because I see and feel the struggle sa life. Kaya siguro na pursue ko yung ganito sa buhay ko kasi (I think I pursued this because) I don’t want to become like my siblings.” And if there’s one tip he would like to share from his journey, Jearson said it’s to value education and grab opportunities that arise.

(We don’t have the same story. But you need to value education. If there’s an opportunity to study, grab it because at the end of the day, you can always go back to your passion because you’re secured, you’re done with your studies.) – Rappler.com