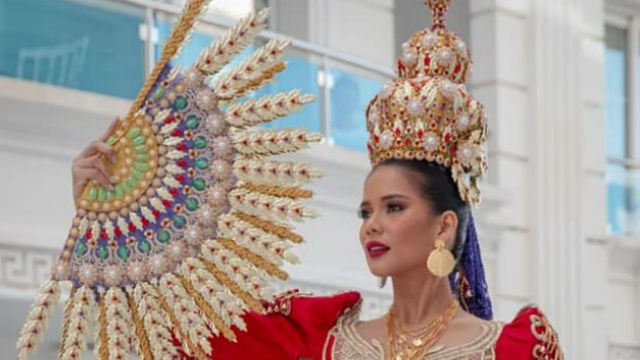 MANILA, Philippines — Binibining Pilipinas Globe 2019 Leren Bautista’s Maranao princess-inspired national costume for the Miss Globe 2019 pageant made headlines — but did you know that they almost went with another concept?

In a phone interview with Rappler, designer Chico Estiva said that Leren’s national costume was supposed to be inspired by the Pahiyas festival before they eventually decided to do the Maranao princess.

“We decided to go out of the box. Dapat talaga terno Pahiyas gagawin (It was supposed to be a Pahiyas-themed terno) but the team decided to take the risk. And luckily, we got good comments,” he said.

Chico also said he knows some people might not find the costume new but also pointed out that the “Philippines has a lot of Asian influences.”

Chico shared that among the materials used for Leren’s costume include brass coil, jade, and gold. On Facebook, he said of the headpiece and fans: “The National Costume also features a Dome headress inspired by the Mosques of Mindanao encrusted in jade of celadon and emerald shades,a pair of fans with blades resembling the golden rice grains of Mindanao and it’s moniker as the Land of Promise.” The Laguna-based designer made Leren’s outfits for both the Bb Pilipinas national costume and evening gown competition in June. His clothes have also been worn by past beauty queens and personalities such as Anne Curtis, Vice Ganda, and Angeline Quinto.