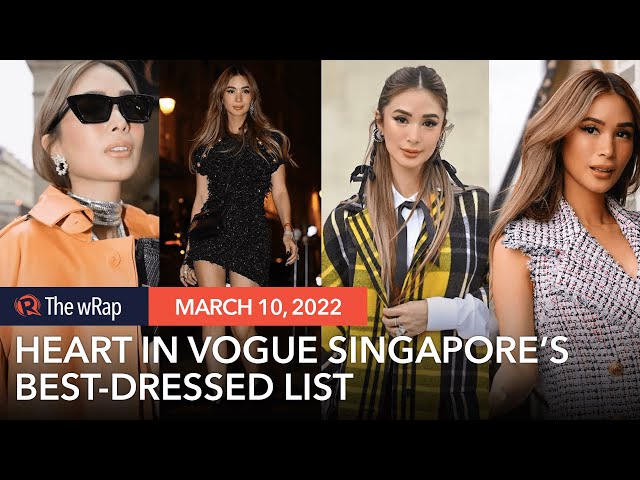 Appearing in Vogue Singapore’s list alongside Heart are some of Hollywood’s biggest icons like Rihanna, Emma Stone, Victoria Beckham, Zendaya, Kim Kardashian, Anya Taylor-Joy, Sophie Turner and BLACKPINK members Jennie and Jisoo. She’s the only Filipina celebrity in the list.

Heart has been staying in Paris since late February for the renowned fashion event where she was seen attending the shows of Dior and Isabel Marant, sitting beside international model Leonie Hane, participating in Louis Vuitton workshops, hanging out with Hermès Executive Michael Coste, and having breakfast with Vogue Editor-In-Chief Anna Wintour and British Vogue Editor-In-Chief Edward Enninful.

The meet-up with Anna and Edward for their Vogue 100, a list of influencers and creatives selected and featured by the magazine. Heart was included in the Vogue 100 in 2019, where she said it’s an “honor” to be “alongside other amazing individuals from all around the globe.”

Heart has been a fixture at Fashion Weeks all over the world, and has collaborated with various fashion brands including Giambattista Valli for H&M, Sequoia Paris, and Kamiseta.

In February 2022, Heart confirmed that she filmed for an unnamed Netflix show. Many fans believed that it’s for reality show Bling Empire, which follows the wealthy lives of Asian-American socialites in the US. – Rappler.com