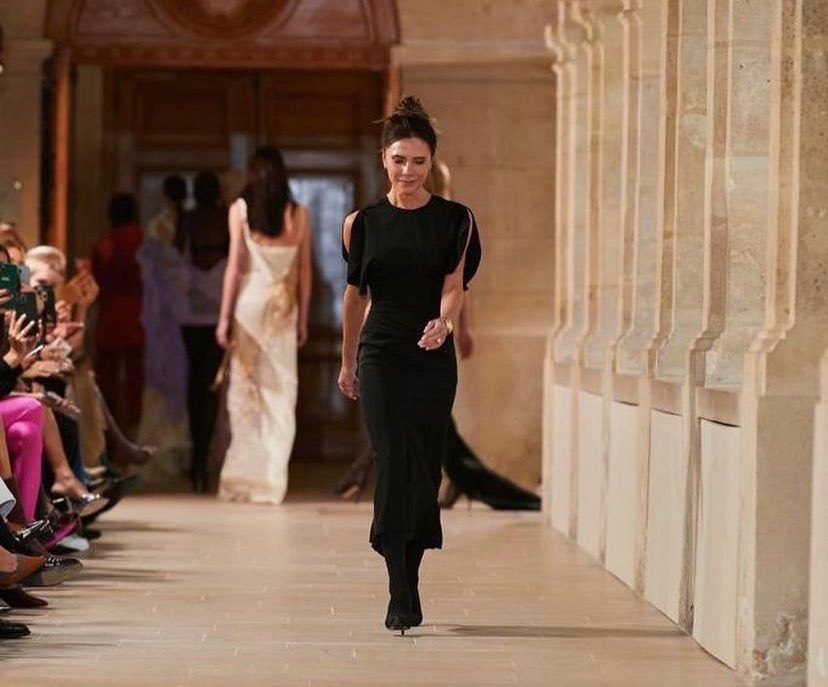 PARIS, France – Victoria Beckham marked her debut on the Paris Fashion Week calendar with a chic lineup on the catwalk, drawing paparazzi photographers and celebrities including her own family, along with the fashion set.

“So just finishing off show detail and look who I run into,” said Beckham, who is based in London, in a video posted on Instagram, showing her husband soccer legend David Beckham and children, including Harper Seven Beckham and Romeo Beckham walking behind her ahead of Friday’s show. Her son Brooklyn Beckham and his wife Nicola Peltz Beckham were also present.

The designer emphasized her label’s elevated side, with sleek dresses and suits, mixing light pastels with all black ensembles, and adding silk fringes, with leading models Bella and Gigi Hadid walking in the show.

After the runway presentation, which was held in the arched corridor of the historic Val de Grace abbey in central Paris, Beckham wiped away tears as she took her bow, pausing to hug Eva Longoria, who sat in the front row.

Of the major global fashion capitals, Paris has emerged from the pandemic strongest, bulked up with new venues to serve the industry, as well as hefty investments in flagship stores and high-end hotels from luxury groups based here.