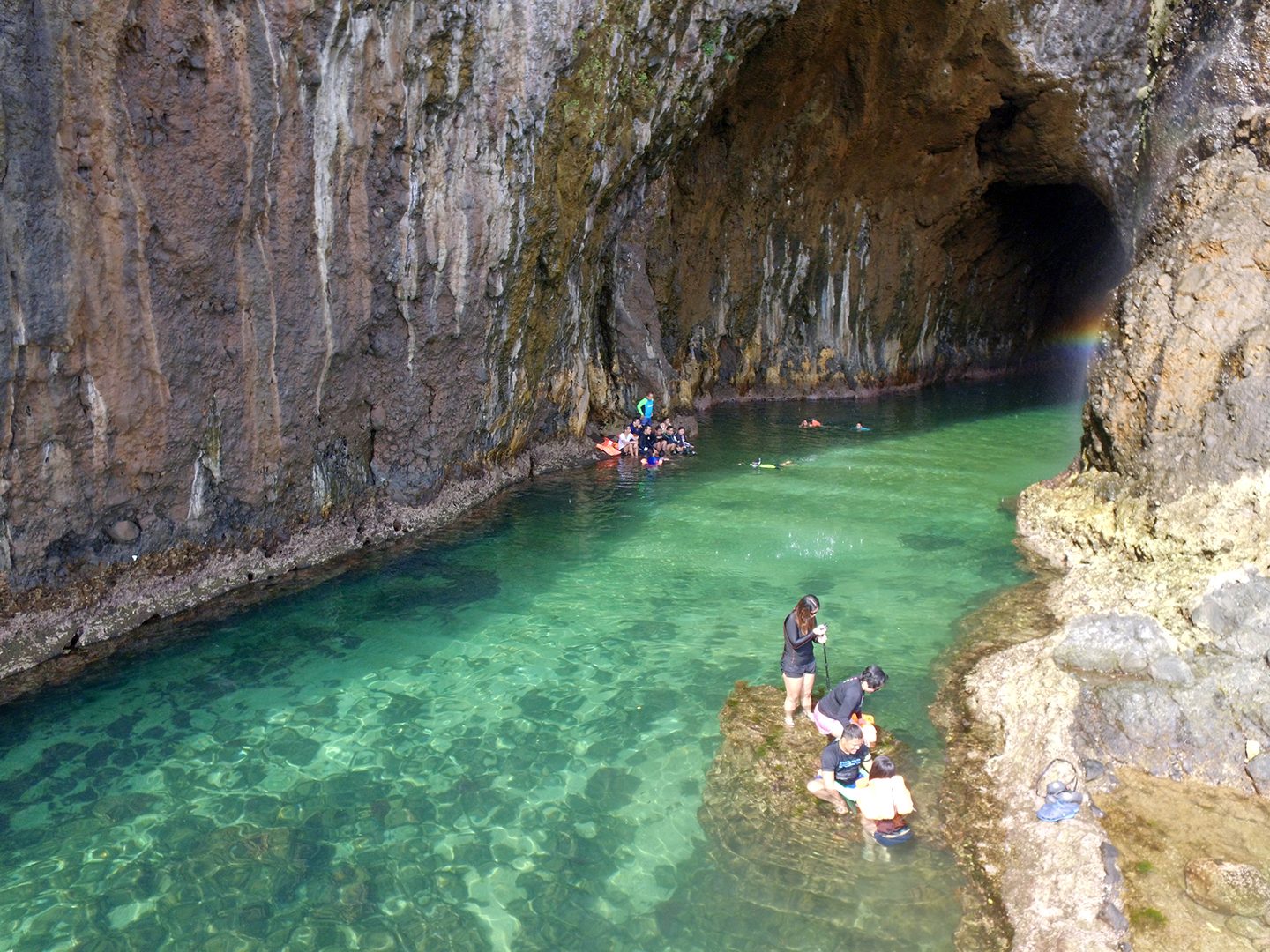 CAGAYAN, Philippines – Lying in the vast blue sea in northernmost Luzon, Calayan Island is one of the most unexplored destinations in the entire Philippine archipelago.

Here on the island, luxury can have a new dimension. Luxury in this jewel island means the ability to discover the island’s many and varied attractions.

Calayan Island is one of the 29 towns in Cagayan province. It is neighbor to the country’s northernmost province, the Batanes Islands.

The island is only for the brave tourists. As every islander is prone to say, “You have to pass hell before paradise.”

From Metro Manila, the capital of the Philippines, you have to travel to the ports of Sta Ana, Aparri, and Claveria towns in Cagayan province, and be ready to ride rather treacherous giant waves. Here, “giant” is literal as the waves are largest in this part of the Babuyan Seas. For some 5 to 9 hours depending on where you take off, be ready for a wet party on board.

While traveling, you’ll have to pass different islands, including the Camiguin, Fuga, and Dalupiri Islands.

Don’t fret. If you’re lucky, a family of dolphins will be on guard, swimming close to your outrigger boats locally known as lampitaw, or you can have the rarest of rare chances to meet the beautiful and gentle humpback whales which had declared that part of Cagayan’s creation as their feeding and breeding grounds for centuries.

As you arrive at the ports of Calayan, you’ll be welcomed by smiles and hospitality of the local residents. There are no taxis or cars to rent in the island. You’ll have to ride an improvised cargo motorcycle, or a rural vehicle called kuliglig.

Now slowly waking up, the island municipality including its barangay islands, is posing a serious threat to other established destinations, even giving others a run for their own money in terms of attractions.

As many other islands in the country, Calayan has its own unique attractions to offer. One of them is the Sibang Cove. Sibang Cove, with its high walls of rocks, offers adventure tourism even as one lazes on fine white sand. 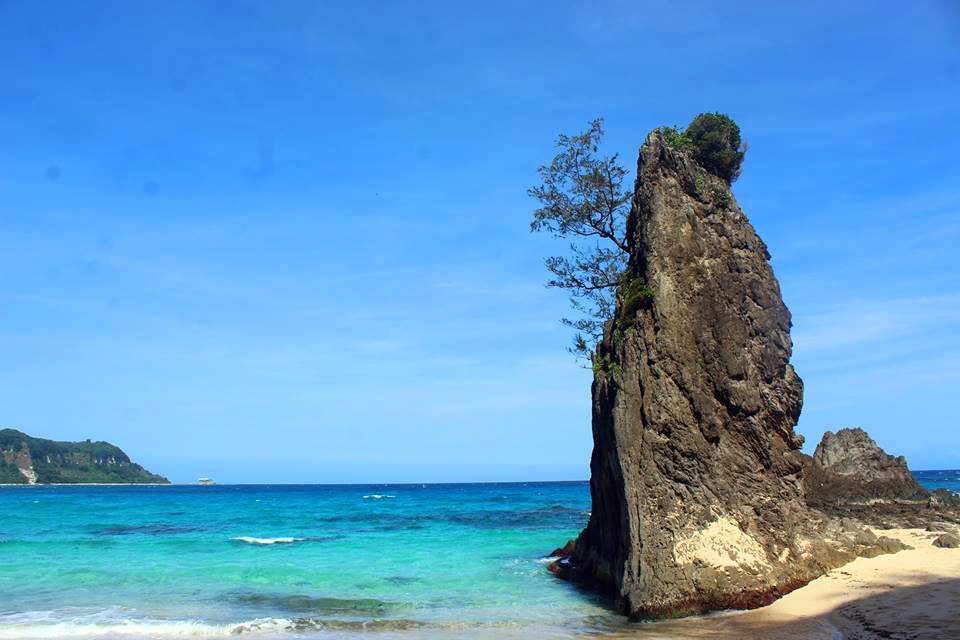 The cove also features rock formations that dot the shoreline and green and clear seawaters to dive into. Just beside the cove is the Nagudungan Hills. From the seashore, you’ll have to climb a steep hill. From above, you can watch the vast blue ocean, beautiful rock formations, and the spectacular sunset.

The mountains will speak to you about giant clams embedded on rocks, and how these have since generated interest among archaeologists worldwide. After viewing the sunset, you can visit an ancient burial jarsite at the foot of the hill. It is believed to be where the old Calayanos buried their dead.

The island also boasts of a cave called Lussok, in English, a hole. It can be reached through a 30-45 minute boat ride. From the boat, you can view the twin holes of the cave. The cave features black and scaly rocks, and a clear green lagoon, best for diving and swimming. After Lussok Cave, you can visit the nearby Bataraw waterfalls that are at least 30 feet high. Not so high but good enough for swimming as the water below is only waist-deep. Other tourist attractions in Calayan include the Malangsi Falls and Cave, the diving and snorkeling sites, the Camiguin Smith Volcano in a nearby island, the Calayan Community Church, and the long coastlines of white beaches and resorts.

But with all these tourist attractions in this small community in the northern part of the country, locals are still striving to offer a comfortable and safe haven for visiting tourists. Mayor Alfonso Llopis told Rappler that over the years, the group of small islands of Calayan has received barely enough funds to develop and boost local tourism, as most of the road networks going to different tourist attractions are yet to be concreted.

From the poblacion alone, tourists have to trek and walk for an hour or more just to get to the nearest and most accessible tourist attraction, the Sibang Cove. Most of the attractions could be reached only by boat.

Aside from the unpaved roads, one of the main challenges for tourists and even for the locals is the inadequate source of power all over the main island. The power, supplied by the National Power Corporation, works for only 12 hours, from 12 noon to 12 midnight. You’ll have to be willing to tolerate the warm weather in the summer months.

The island also has no school for tertiary education. While there was once an operating “extension” of the Cagayan State University, Llopis said the teachers have since been pulled out and have yet to talk to university officials.

Given this situation, students who want to pursue college are forced to move out to the mainland Cagayan. But with the current administration of President Rodrigo Duterte, Llopis hopes there will be “aggressive” funding from the national government as even the Department of Tourism’s new secretary has seen potential in the island.

With an airport expected to open soon this year, the island is now preparing for the influx of more tourists.
​​
The island town’s tourism focal person Erick Natividad said they are now working on the accreditation of hotels and resorts, tourist inns and homestays to assure the safety and comfort of tourists.

He said the airport is set to open in August this year, and the local government is admittedly unprepared.

This has led them to appeal to investors to put up hotels and resort businesses to cater to the needs of tourists. – Rappler.com

Excited to explore the islands? Check out our Expedia coupons for the best deals on hotel and travel.