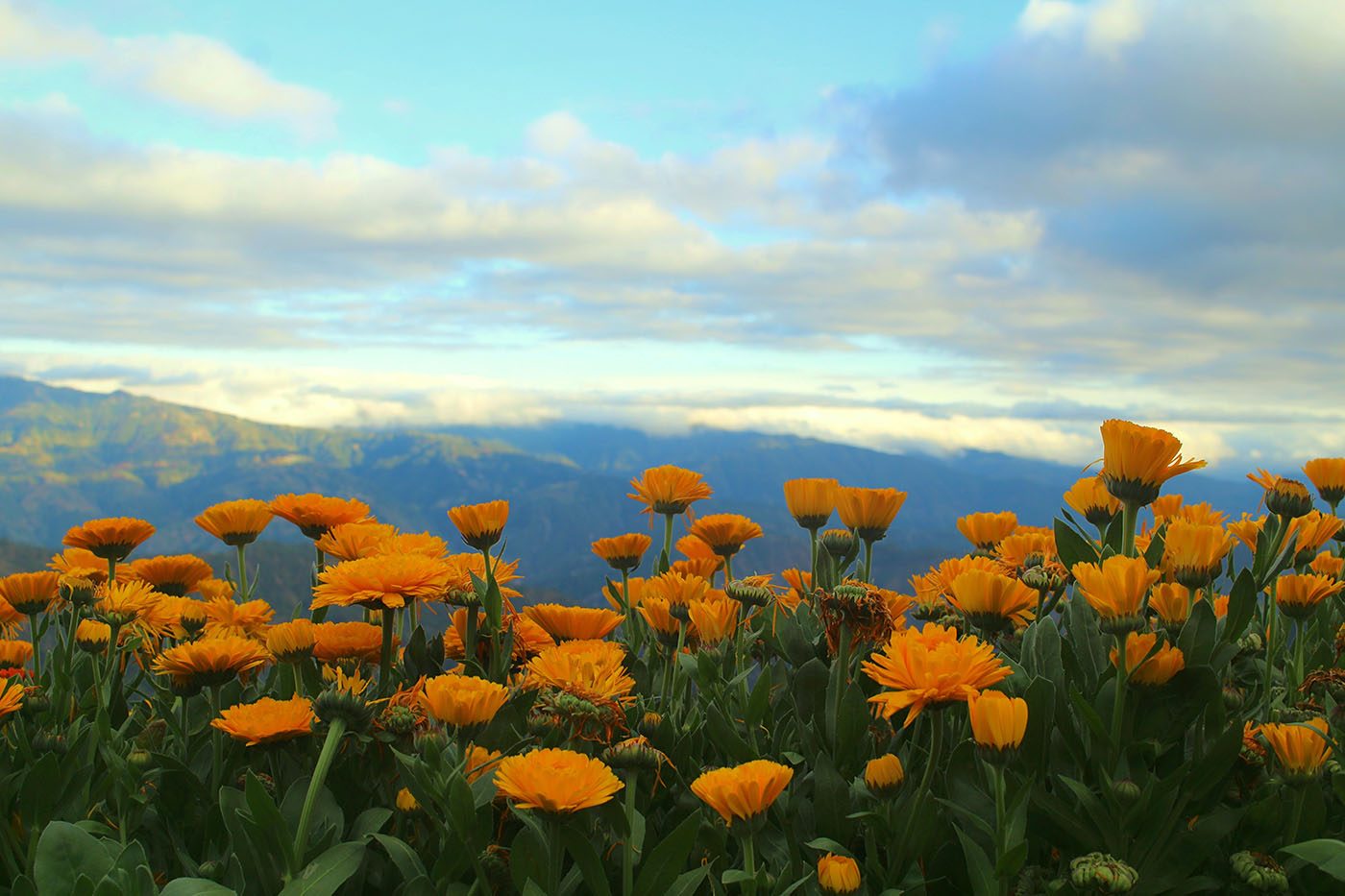 Much like people who go to safaris for a genuine experience of the wild, some travelers have been flocking to gardens lately to see flora in its natural habitat.

The Northern Blossom Flower Farm in Atok, Benguet, has been dominating social media for quite some time now. It boasts of pastel-colored flowers and distinctive rose cabbages carpeting the mountaintop, with a majestic sunset and the stately Mount Pulag as backdrop.

The flower farm which has been compared to the Netherlands’ Keukenhof will celebrate its first year anniversary this April. Due to public demand

“It is forced tourism,” proprietor Lany Ganayan said affectionately, as she explained why they decided to open the flower farm to the public a year ago. “We opened due to public demand.”

Lany Ganayan’s family runs the Northern Blossom Flower Shop in Dangwa Flower Market in Sampaloc, which is popular among event organizers and florists.

Next to their Benguet home, she built a guest house for her clients who wished to catch a glimpse of the flower farms. Not too soon after, unexpected guests – mostly travelers on a destination further north, taking a sidetrip to Atok – knocked on their door to ask permission to view the gardens.

As a busy farmer and flower dealer-supplier, Lany allowed the guests explore her gardens, but she was not fully invested in it. It all changed one morning when she was drinking coffee and two mothers who traveled hours to her farm arrived with their young children.

“The mothers said they want to show their children what a flower farm looks like,” Lany shared. She obliged. Back from the farm later, the youngest child told her: “It’s so nice. When I grow old and I have kids, I will bring them here.”

The child’s words apparently got through her. That night, she sat with her husband and they decided to open Northern Blossom Flower Farm to the public. “They may not know it, but we have been seen by the public already before the farm was formally opened,” Lany told Rappler.

Atok is where one can find Barangay Cattubo, known as the highest point in the Philippines above sea level in the country’s highway system. The temperature can drop to zero degrees. Sometimes, usually during the first few months of the year, local gardeners would wake up to find their flowers and vegetables covered in frost. Atok experienced a hailstorm in 2018.

Lany’s seedlings are imported from Japan, and the flowering plans can only grow and bloom in temperate areas.

The rose cabbages were brought to public attention when it constantly graced the front page of local and national papers when Benguet’s farms were covered in frost. The staple Filipino vegetable viand as a frost-covered flower, despite the Philippines’ tropical climate, was irresistibly spectacular. It was also featured ina  national travel weekend shows despite Lany’s initial reluctance. “I’ve grown here,” she said. “Sometimes, you forget that something can be mesmerizing just because it’s in your backyard.” The perfect view, the accommodating climate, and Atok’s terraces of flowers ignited huge social media attention. Within a few weeks, the posts went viral and guests poured in.

The local tour guides under Lany’s employ are also talented photographers. If you geo-search on Instagram, you will see beautiful photos of Northern Blossom, mostly  taken by tour guides who grew up in the area. They know the landscape by heart, and know how to direct the guests for a stellar photograph that captures the important natural elements: mountains, sky, sun, and the flowers. “Cut flowers are our calling,” Lany said. “We can grow it, but the tourists visiting are coming here for God’s work. This place is naturally photographic.” The best time to visit are usually during the first 4 months of the year, though the hailstorm that struck Atok in 2018 happened in April.

From Baguio City, take any vehicle that passes by Atok: Rising Sun Bus at Slaughter Station in Magsaysay or Lizardo Bus at Dangwa Station near Baguio Center Mall. There are vans in Dangwa Station in front of Good Taste Magsaysay that are bound for Abatan or Mankayan. You can ride those, too. Another pickup point is the Shell Gas Station in Kilometer 5.

If you’re riding a bus, ask the driver to drop you off at the Atok Municipal Hall. If you rode a van, Marosan’s Restaurant in Atok is usually the stopover site. From there, you can walk down to the road leading back to Baguio City. Northern Blossom is on the right side of the road if you’re traveling from Baguio.

The entrance fee is P250 per person, good for two hours. Seniors and kids aged 6 to 8 pay a discounted fee P200 and P50 each, respectively.

You may want to explore the town after. Buy cheap local produce in the market. There is also a church nearby. Cap your day in Atok by moving to the nearby Loyung’s Restaurant and Bakery, a few meters away. It is well known for its freshly-baked egg pies at P35 a slice. With the lack of homestay accommodation in Atok and with the number of visitors pleading to experience the golden sunrise despite the very cold weather, Lany and her family put up a transient house beside their home. Their rooms can accommodate solo backpackers or a tour group of 20 at reasonable rates. “Be careful with the beds of flowers when you visit,” Lany would ask tourists with a smile. “Some tourists would step on anything for a good photo. Leave the gardens picturesque for the next visitors.”

She laughed heartily at a group of tourists holding flashlights as they took photos at dusk.

“Some guests would come here as early as dawn to watch the golden sunrise,” Lany said with pride. “And in the sunrise, when the colors of the world are slowly revealed, that’s when you understand how amazing our God is.” – Rappler.com Ian Layugan teaches Art History and Qualitative Research at the University of Baguio. An alumni of the Philippine Center for Gifted Education, he writes about science, community, travel, and culture. He is the blogger behind I and Scapes. His IG and Twitter handle is @1anlayugan.