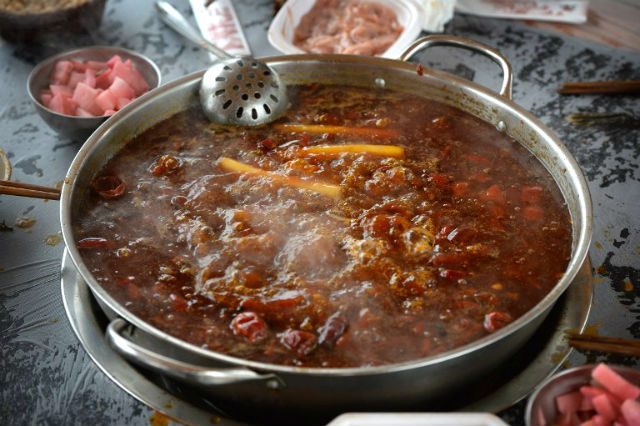 Facebook Twitter Copy URL
Copied
"It's numbing, it's hot, it's very flavourful, it has an aroma that hits you in the face, and that's why everybody likes it," says one Chinese of the famous hot pot meal

CHONGQING, China – Thousands of vats of hot pot seasoning thicken the air around Nie Ganru’s home with a miasma of chili as flame-red paste, thick with oil, bakes in the sun.

Nie lives and effectively breathes hot pot, the spicy cook-it-yourself communal Chinese meal that made his fortune, and has built a pot-shaped six-storey museum dedicated to the dish.

Now his home town, the megalopolis of Chongqing, is seeking national and ultimately global recognition for the food.

“It’s numbing, it’s hot, it’s very flavourful, it has an aroma that hits you in the face, and that’s why everybody likes it,” says the 70-year-old tycoon, who eats it about every other day.

Seated at a wooden table crowded with dipping options, Nie plunks capsules of duck blood into a simmering broth teeming with oil, chilis and hot and numbing Sichuan peppers. Others ladle out oil-coated slices of lotus root and cool their tongues with pickled vegetables.

“Everyone gathers around a table to eat and it’s harmonious, it’s lively, it’s warm – it’s a great environment,” he says.

The museum houses hundreds of pots Nie has collected over more than a decade, including one supposedly used in the palace of the Qing dynasty Qianlong Emperor in the 1700s and another dating to the Western Zhou dynasty of 1046 to 771 BCE.

Hot pot originated a century ago as a low-brow meal for peasants squatting by the river to cook ox tripe and other offal, but has since followed China into prosperity.

The first restaurant opened in the 1930s and the meal’s popularity spread when Chongqing became China’s capital during World War II, drawing the displaced from around the country.

As China’s economy exploded in recent decades, hot pot too has boomed, with other regions offering different varieties and upscale venues serving delicacies such as fatty mutton slices, rabbit kidney, prawns and mushrooms.

Communist leader Mao Zedong shared the meal with Nationalist rival Chiang Kai-shek before ousting him in civil war in 1949, his exhibits show.

Another mural depicts paramount leader Deng Xiaoping treating officials to hot pot in the late 1970s while strategising the Reform and Opening overhaul that would transform the country.

Yet competition for a place on the national list of “intangible cultural heritage” is tough in a huge country with a rich culinary tradition.

Only a handful of its more than 1,200 entries are foods, each heavy with history – dishes served in the residences of emperors and the sage Confucius, salt from the ancient Zigong wells and a rice dumpling brand dating back to the 1800s.

‘Good for the body’

Chongqing – which was split out of the more culinarily renowned province of Sichuan in 1997 – is just one of many locales trying to cook up attention by winning recognition for native dishes, says Fuchsia Dunlop, a Chinese food expert and author of Shark’s Fin and Sichuan Pepper.

“Certainly the Chongqing hot pot is very distinctive and hugely popular,” says Dunlop. “The entire surface of the pot is covered with these spices… it will really blow your head off.”

But, she adds, “If you start trying to label things, intangible cultural heritage in China, where do you stop? It’s such a rich and wonderful culinary culture and there are so many dishes that go back centuries.”

So far Chongqing has managed to get itself christened “China’s hot pot city” in 2007 by the China Cuisine Association.

It has added hot pot to its own catalogue of intangible cultural heritage, which boasts 278 entries – although half the country’s provinces have compiled even longer lists.

The Chongqing Hot Pot Association, which applied for national recognition, also aspires to someday join Unesco’s global list – which only features a few food entries, including a set of cuisine customs called washoku from China’s longtime rival Japan, but none from China.

“Eating hot pot makes you feel hot, and this can be good for the body,” says 20-year-old Chongqing resident Li Yao. “It helps you sweat.”

“From a health point of view it’s not very good,” she says, gathered with her family around a bubbling vat and bowls of rice.

Still, she adds, “I don’t think I could live without hot pot.” – Rappler.com