9 stunning PH under the sea photos Editors’ note: It can be quite overwhelming to select the perfect dive spot in the Philippines, but there are plenty.

Below, photographer and freelance dive master Jun Lao shares photos from his many dives and introduces you to some of the sea creatures he’s met underwater – some solo, others in pairs, others in schools of countless thousands.

Pack your bags and go.

Shooting schools of fish is an art form and waiting for that precise moment when they approach and all together, turn and reveal their shimmering sides, yields the best school photos.

Personally, I enjoy shooting smaller schools of fish like jacks and yellow snapper schools, but trying to shoot a school of fish that felt like it was the size of a football field was one enormous task.

For this photo, I made sure the sun was behind me, had my flash set to full power, opened my aperture wider than I would and a shutter speed bordering on blur and still motion – before I knew it, I was able to get a once in a lifetime shot. Crazy as it sounds, the sardines are found just 10 feet underwater, even snorkelers may enjoy the intense show of epic proportions. In this photo, I luckily had my friend, instructor Ros, at the right place at the right time.  We had been diving for around 30 minutes and a smaller school broke away from the bigger school. The tiny breakaway group made a fantastic display of amazing shapes and here, we can only say… why?

(READ: No excuse not to dive in Davao) 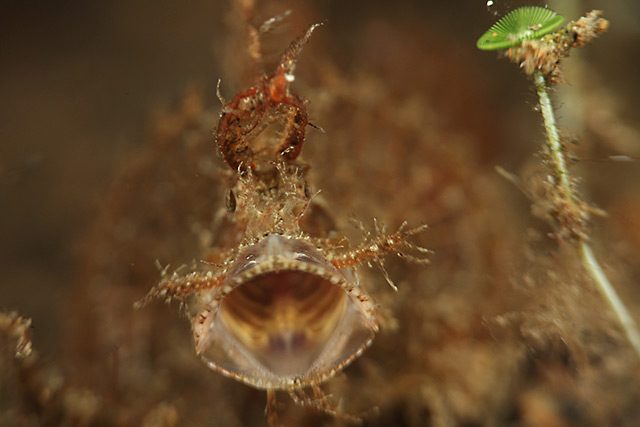 Being observant and patient are key elements to catching special behavior of the tiny residents of Anilao.

In this photo, I was following a pair of Ambon scorpionfish, where the female was almost twice the size of the trailing male.

While the female was much easier to shoot because of its bigger size, I noticed the tiny male was yawning while following its spouse. After around 15 minutes, the pair stopped moving and I focused on shooting the tiny male. I waited again for roughly 20 minutes to take the shot of the tiny male doing its magnificent display.

Ambon scorpionfish were first thought to be found mostly in Indonesia, but there are apparently two pairs of these special critters known to be hanging around Secret Bay in Anilao at the moment. Had the privilege to have met Kuba several times. His moniker was coined from his camel back shaped shell instead of the usual smooth & rounded form. This was special because he allowed me to get really close, he’s one of the friendliest turtles you’ll encounter in the wild.

In this photo, I was a foot away and enjoyed our lengthy buddy pictorial, which happened at a mere 15 feet of water. He was a resident of Twin Rocks Dive site for several years but has since moved on.

Divers share that he can be still occasionally seen at the Mainit dive site area. 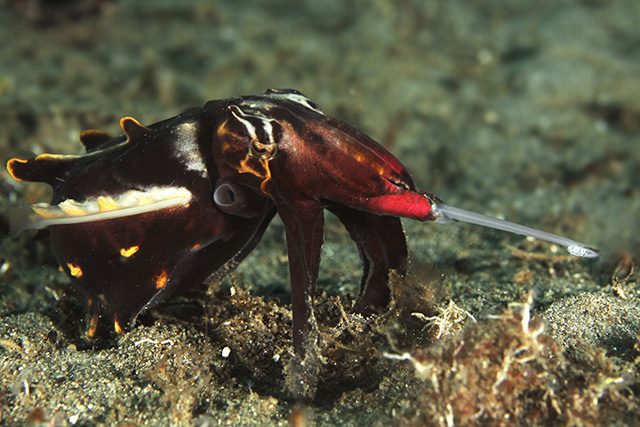 Flamboyant cuttlefish are seen occasionally in Anilao at depths of 10 feet to 50 feet, usually foraging in sandy areas for a meal.

I’ve seen them many times in Anilao but to catch them feeding was a definite treat. As I was shooting, I saw a pair of cuttlefish of the same adult size marching the sandy slopes of the Bethlehem dive site.

Observing them for several minutes, I could see that one of them was actively hunting, sticking its tongue out, measuring the distance of its prey and after aiming at it several times, striking with lightning speed for its meal. Malapascua is one of the few places where you’ll get the opportunity to see the thresher sharks. I’ve been here countless times and every trip always posed a new challenge in taking photos of these apex predators.

Either there are too many tourists and the threshers decide not to play, or visibility is too murky that the camera refuses to lock in focus.

It took me several trips before I got a decent shot of one.  The threshers usually hang around 70 feet, visiting Monad Shoal for cleaning administered by the reef fish in the area.

For this photo, I decided to wake up earlier than usual, left at 5 am and did a solo dive, and was lucky enough there was one very much willing to play and did a fly-by just 5 feet away from me. Some call Apo Island turtle heaven since on an average day, a diver may get to see two to three turtles in one dive.

Turtles are seen from every depth but the best chance to take photos of them is while they are hanging around the shallow portions of the reef.

This photo I took at around 15 feet along with a dive buddy ready to take her shot. Best to approach slowly, contain your excitement, get a few images and anticipate a take off shot. Dumaguete is home to the rare and the beautiful and in just 6 feet of water during low tides, you can luckily encounter the much sought after harlequin shrimp.

Definitely one of the most beautiful shrimp of the reef, they usually hide during the day and come out to play by night.

In this photo, I had my tank actually sticking out of the water but I had much fun shooting it despite the strange and laughable position.

A battery of barracuda Every encounter with a battery of Chevron Barracuda brings about mixed emotions.

While they were so thrilling to watch moving in unison, I still had fears that one might just jump out of school and see me as a tasty meal.

This photo was quite special since it was the last dive of our Tubbataha trip, and my buddies and I were just sharing that we hadn’t seen Barracuda yet. Luckily enough, just 5 minutes upon entering the water, we all got lucky as a good-sized battery was waiting for us and played with us for several minutes.

Our fears took the backseat during this moment. – Rappler.com

All photos by Jun Lao 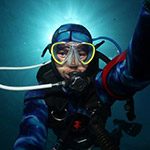 Jun, of paparazsea.com, started scuba diving in 2006, owned his first camera in 2008 and has since never looked back. Having done over 2,000 dives, he has explored many dive sites around Southeast Asia only to discover the Philippines has so much more to offer. Currently, he works as a freelance dive master conducting photo trips around the country and mainly takes photos to inspire people to get more involved with marine-related adventures and issues concerning our seas.