Facebook Twitter Copy URL
Copied
Camp John Hay, Session Road, Baguio Cathedral are just a few of the spots that are rich with history in scenic Baguio City
BAGUIO CITY, Philippines – Ah, Baguio. The city, a popular tourist destination and well-known for its cooler climate, is also rich with history. Here’s a quick tour of a few spots that remind us of these connections to American presence in the Philippines.

Burnham Park – This is named after Daniel Burnham, the popular American architect and urban planner who came to the Philippines. In 1905, he came out with the “Report on the Proposed Plan of the City of Baguio Province of Benguet, P.I.” He designed Burnham using the urban plan of Washington D.C. (also his creation) as his template. So Baguio in a way was planned for both power (Washington D.C.) and recuperation (as the Summer capital of the Philippines). Using his Axis plan, Burnham created Baguio’s civic core with two building clusters on the opposite sides of the valley: on one side is the cluster of buildings for local government, and the other for the national government as Baguio became the Summer Capital of the Philippines. In the middle is a park, later known as Burnham Park. As early as 1930, the Lake already had a dancing fountain.

In 1903, a land in Benguet was ceded to the United States, and Roosevelt named it Camp John Hay (CJH). In 1905, John Hay died. CJH was a recreational facility even then, completed in 1913 by J. Franklin Bell, then the Commanding General of the Philippine Department.

There is a huge house in CJH still called the Bell’s House and the nearby Bell’s Ampitheater, where many weddings are now held – that is why people thought it was named after “wedding bells.”  CJH then had a permanent garrison of three companies composed of warriors from Ifugao and Bontoc wearing G-strings and coat. The Americans held on to CJH until July 1, 1991 when it was turned over to the Bases Conversion Development Authority. But old timers remember that time when it was still held by the Americans, when one could have bottomless coffee, real beef hamburgers and chili cookouts. Commodores even played there for free. The only American holdover there now is the US Ambassador Residence.

Kennon Road – It cost $2 million to make then in the early 1900s, which was already an anomalous expense according to some US senators. It was finished in 1905 by Major Lyman Kennon and opened the expansion of the former ranchland known as Kafagway.

Casa Vallejo – It may have a Spanish-sounding name, but it was then known as Dormitory Four, the lodging house of the foremen of Kennon Road. In 1923, it was leased to Salvador Vallejo who turned it into a hotel. It survived the carpet bombing of Session Road at the end of World War II and its present incarnation remains faithful to Dormitory Four.

Teacher’s Camp – It began in 1908 as a place where Thomasites and other American teachers all over the Philippines stayed for a few weeks during the summer. These 400 or so teachers would stay in tents and enjoy the American life they so missed. Soon English-speaking Filipino teachers would join them and the Philippine Legislature decided to build semi-permanent wooden dormitories and halls for them. 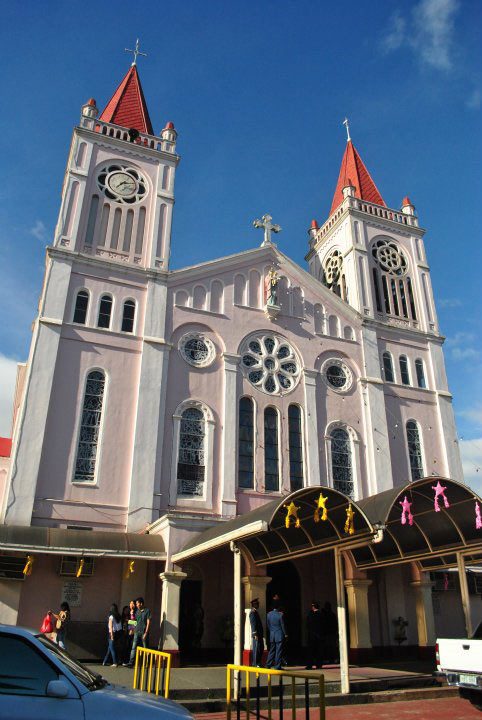 Baguio Cathedral – One of the rare Philippine cathedrals not built by the Spaniards. Its construction was started in 1907 by Fr. Seraphim Devesse, one of 8 CICM priests to start their religious mission to the Philippines. Fr. Devesse was succeeded in 1913 by Rev. Fr. Florimund Carlu who then built the Baguio Cathedral over Devesse’s St. Patrick Church in 1920. It was finished 16 years later.

Baguio Country Club – It was then a grass-roofed shed made of pine stubs, the only sport facility then was a golf course with three holes, tennis and trap shooting. Now it is one of the most sought after private clubs in the country.

Philippine Military Academy – According to historian Rowena Reyes Boquiren, who helped found the Baguio Historical Commission, PMA began in Sta. Lucia Barracks in Manila set up on 8 August 1905. “The Officers’ School of the Philippine Constabulary was moved to Baguio on September 1, 1908 on Constabulary Hill, now known as Camp Allen with the school building built in 1914. The school was transferred to Fort Del Pilar, its present location in 1948 as the Philippine Constabulary Academy.” It was the oldest military academy in Asia and is still being called “Asia’s West Point.” Brent School – According to Boquiren in her article, “Baguio’s History and Cultural Heritage,” Brent School was conceived as part of the 1905 Burnham Plan for Baguio. “It was established in 1909 as an Episcopal Church school for Americans, originally with a 2-storey structure that contained the classrooms, 2 dormitories, kitchen, dining room and office (now the Ogilby Hall). Ten young American boys comprised the first class on January 5, 1910. Bishop Brent and 2 American teachers ran the school, assisted by a staff of one American lady, a Chinese cook and six Ilocano houseboys maintained the school. The school had 26 students in 1918, still all male and, in 1921, its first girl student.”

There are more “colonial vestiges” like Dominican and Mirador Hills, Mines View, Café by the Ruins, Leonard Wood Road, City Hall and a whole lot more. You will end up seeing that much of Baguio carries with it something American. Which is true – listen to the Baguio residents speak and there is always a quaint English word even when they are speaking Kankanaey.

Their favorite music is country and Western, a genre not shared by the rest of the country. The first ukay-ukay were hand-me-downs from American settlers. Their food (pancakes, potatoes, strawberries, cabbages) are alien to the so-called Philippine cuisine. And some of them still have American surnames like Keith, Wooden, Young and Willy. – Rappler.com