Reporting bad cab drivers? There’s an app for that 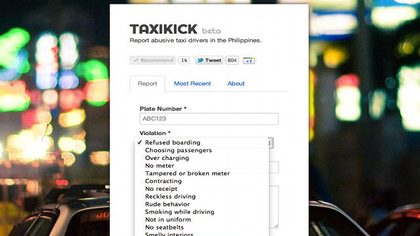 Presenting Taxikick, a free online app that lets you submit reports of abusive taxi drivers anywhere in the country.

It was developed by Pencil Rocket, a tech start-up based in Manila composed of web designers and developers.

The premise is simple: you go to www.taxikick.com, enter the plate number of the erring taxi, select the violation from a drop-down menu, add the taxi name, and put in the details of your complaint. Then press “Kick this taxi!” and you are done. The app will then email the details to the Land Transportation Franchising and Regulatory Board (LTFRB).

“I guess we felt ‘Oplan Isnabero’ can be improved,” Pencil Rocket told Rappler in an email, referring to the project of the Department of Transportation and Communications (DOTC) where people can report erring taxi drivers.

“Asked for 250 for a Cubao-Katipunan trip. Taking advantage of the helpless, no-choice passengers,” said one complaint, directed at a cab with plate number UVS 124.

“This driver phoned his friend in the middle of moving traffic,” a complaint on a taxi with plate number UVG 452 said.

“Refused boarding,” one simply said of a cab with plate number TXW 112.

Most complaints, the group said, are about overcharging, followed by rude behavior.

The app intends to link up with the LTFRB, so that they can submit reports directly to them. Users can also tweet @taxikick their reports and complaints.

Feeback, they said, has been positive so far. “[Users] are very vocal about their suggestions to [help] improve taxikick,” they said.

They are also planning to develop mobile apps for iOS and Android devices, but in the meantime, commuters can go directly to the site, which is also optimized for mobile users.