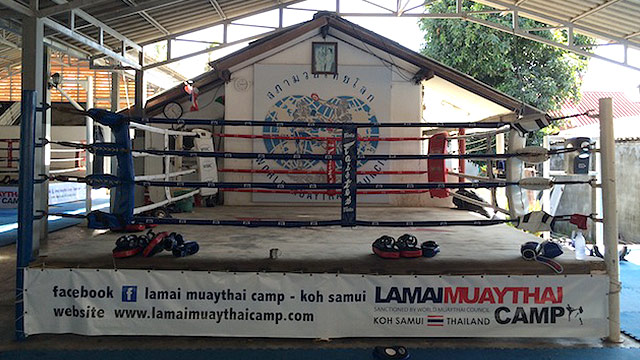 Mixed Martial Arts, or commonly known as MMA, has been a part of my life since the early teenage years. It was just recently, though, that I fell in love with Muay Thai.

Muay Thai – “the art of eight limbs,” is a combat sport which originated from Thailand and uses fists, elbows, knees and shins. Beautiful to watch, deadly to compete in, Muay Thai is a combination of stand-up striking with 8 points of contact, punching (fists), kicking (shins), elbow & knee strikes and clinching.

“That’s what I love about being a beginner – your mind is so open to change and so thirsty to learn that the passion helps overcome the fear and awkwardness of first time experiences.”

As a beginner, in any new sport, I always want to study, research and improve. What better way to learn than to travel and immerse myself in the culture where it all began? Thailand.

Always a worrier and an obsessive planner, I sat down with my Filipino Muay Kru (teacher), Ryan Jakiri from Submission Sport Philippines and interviewed him about which camp to go to and why.

Jakiri, a Muay Thai Champion (knocked out a few competitors with a swift kick to the head), plus well-respected coach, has trained with the best. He advised I seek out the Lamai Muay Thai Camp WMC in Koh Samui, Thailand. He lived and trained there for several months and could vouch for the quality of trainers.

Before leaving, I trained with Jakiri at Ultimate Fitness in Metrowalk just to be sure I had the basics covered and won’t fall on my face when I got to Samui. Oh, was I so wrong. No amount of cramming could’ve saved me from the ass-kicking I got. 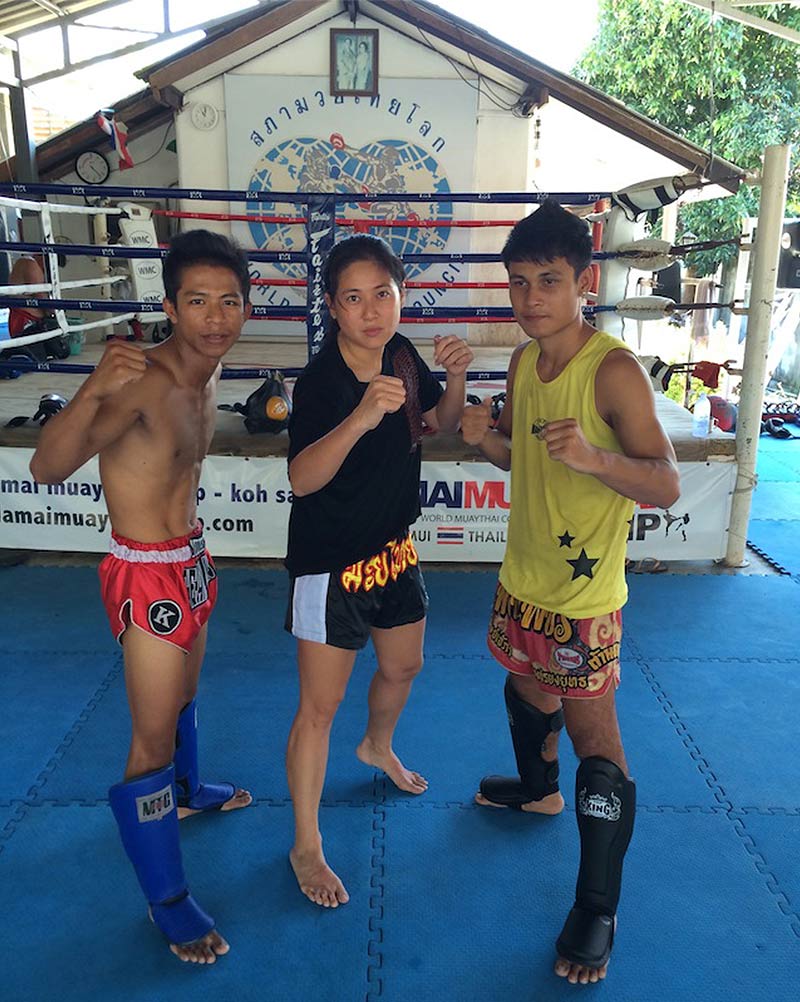 Ko (Koh) Samui – an island in Thailand, is a quaint and breathtaking destination reminiscent of our very own Boracay Island. White Sandy Beaches, thriving nightlife and amazing cuisine, make this an ideal getaway. The airport that greeted us looked like an ad for a resort – picture perfect.

I was actually in Koh Samui for a friend’s bachelorette celebration. And, since I knew they’ll be dead asleep in the morning, that’s when I planned to go train.

(To get to Samui: Book an early flight to Bangkok. I suggest the 6 am flight so you get to the Suvarnabhumi Airport, grab lunch and take the next flight to Koh Samui. We took the lunch flight and made it to the hotel for the 2pm check-in.)

It was very exciting to plan, research, interview and download everything for my trip but to actually wake up, put on my muay thai shorts, pack my wraps and gloves and request a cab to go to the Lamai Muay Thai Camp was a challenge.

Insecurities were plaguing me – what if they don’t like Nak Muay Farangs, or foreigners? Are they friendly? Will we understand each other? It was a bit daunting to show up in Muay Thai Camp, alone and in a different country.

Good thing our hotel was very accommodating, and when the staff found out I was leaving to try Muay Thai, they were very helpful and enthusiastic. Everyone seemed to love Muay Thai, just like how we Filipinos love boxing. 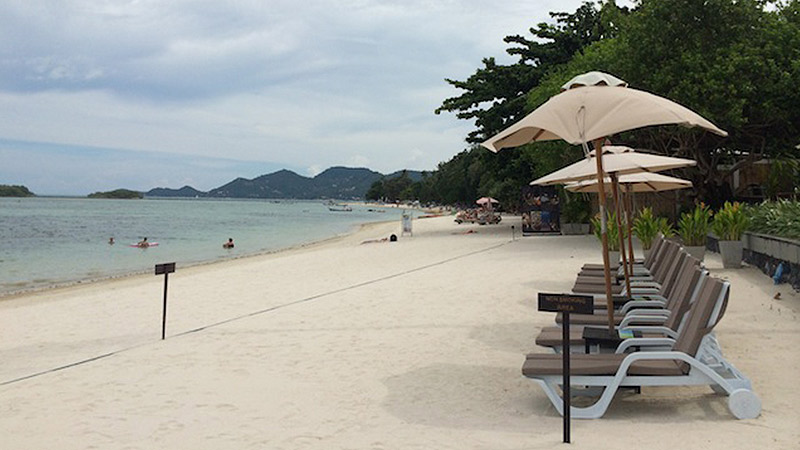 The trip to the camp was about 45 minutes away from the hotel. We traveled from the busy Chaweng Beach to the sprawling open spaces with spectacular views of the ocean towards Lamai Beach. I felt safe in the cab as the hotel arranged the transfers at 600 baht one-way.  (READ: Diving in Malapascua, searching for thresher sharks)

Learning from the best

The Lamai Muay Thai Camp WMC, which is supported by the World Muay Thai Council, is known to be the best on the Island. Fighters from all over the world come to live and train here. Train. Eat. Sleep. Repeat.

I would love to experience that at least once in my life. As I arrived, a friendly face greeted me, which put my immediate worries to rest. Daniel Stobbard was manning the desk and made me feel right at home with light banter and chitchat. I wasn’t able to reserve for the personal training session and he was kind enough to accommodate me and assign their trainer Dom, who specializes in the clinch and technical movement, to teach me. 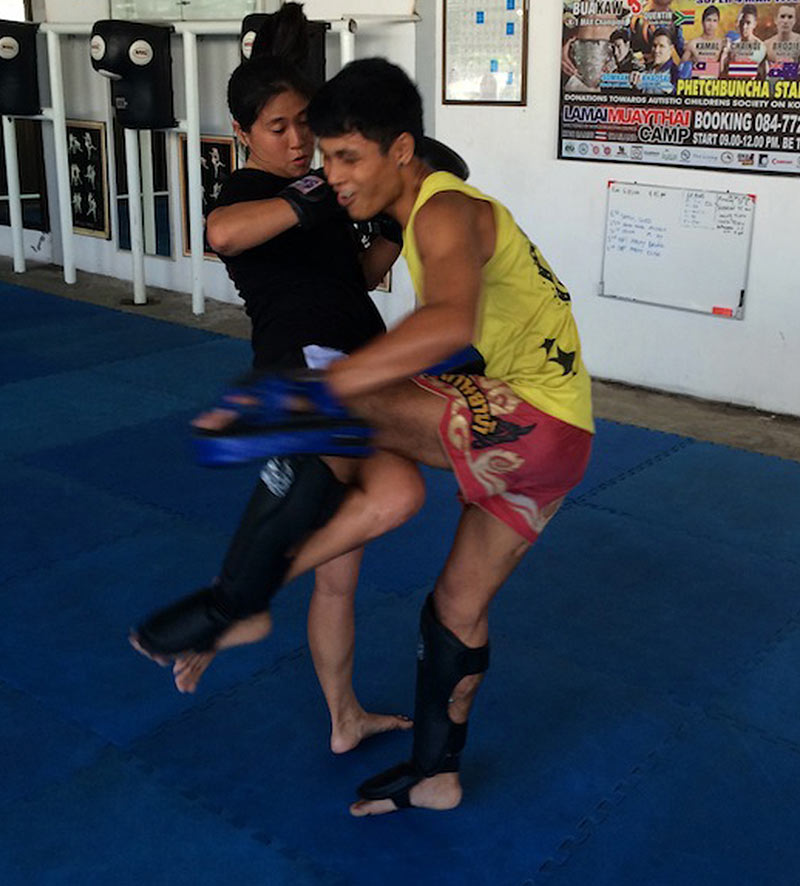 Private lessons are 1,000 Baht (about US $30 or P1,377) per session and every minute of learning was worth it. While waiting for my trainer, I was able to warm up and stretch well.

Good thing I did, because as soon as Dom arrived, we dove straight into the lesson. Daniel asked if I knew the basics and I quickly replied – beginner. I wanted to be a blank fresh canvas that they could mold into something better.

Dom first checked my basic punches, kicks, clinches and knees thru feeding pads/mitts. I loved how even there was a bit of a language barrier, he was able to correct a lot of my movements, especially my elbow and knee combinations. Boxing has been the base of my MMA training in the Philippines, so elbow and knee strikes do not come naturally to me as punching.

We had a lot of laughs with him teaching me flying elbows and knees, as I could not seem to launch myself as gracefully as he does.

After getting dizzy studying so much different contact combinations, huffing and puffing until I was red in the face, it was time for some rounds of study sparring. This is where I got my butt kicked – several times actually.

Dom would literally grab my foot and kick me in the butt. It was so much fun sparring with Dom that even if I fell on my ass several times, I was laughing so hard that the other coaches ended up watching us, shouting encouragement between laughs too. 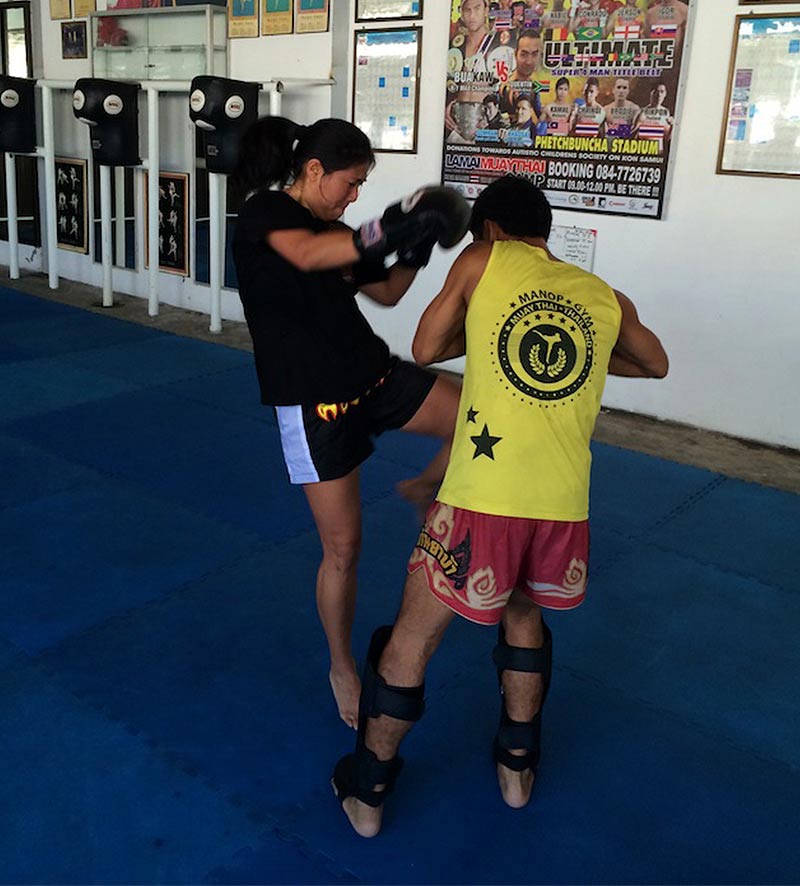 With the intense training comes conditioning, too. We jumped into heavy core workouts that involved a lot of push-ups and abdominal workouts. Muay Thai is such an invigorating activity for the mind, body and soul. It not only pushes you to be physically fit but also balanced, mentally and emotionally.

I still have so much to learn and so much to research on. That’s what I love about being a beginner – your mind is so open to change and so thirsty to learn that the passion helps overcome the fear and awkwardness of “first time experiences.” (READ: Embrace the challenge! The basic guide to your first ever climb) 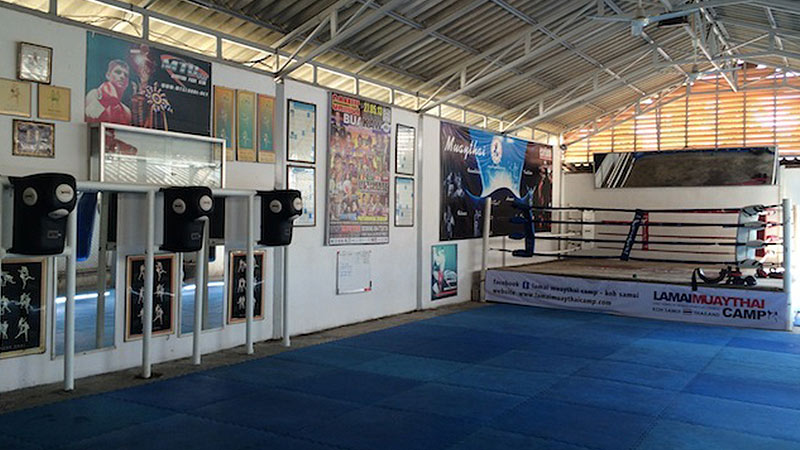 I’m already planning my next trip to the Lamai Muay Thai WMC Camp and plan to train, eat, sleep, repeat until I get better – and hopefully, not fall flat on my face again. – Rappler.com I love traveling and adventure. From jumping out of planes to climbing mountain peaks and diving with sharks, no adventure is too much for me. Quoting May West, “You only live once, but if you do it right, once is enough.”