PHOTOS: Christmas in stunning Paris, the City of Light 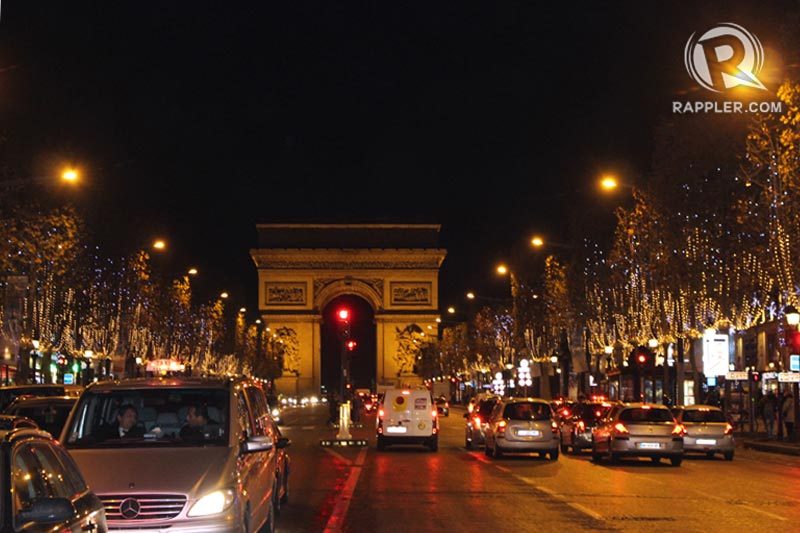 Facebook Twitter Copy URL
Copied
Beautiful Christmas markets, streets aglow with holiday decorations, the romance and whimsy of the City of Light
Paris is a city known for many things: its legendary beauty that was meticulously planned and renovated by Napoleon III and his city architect, Georges-Eugène Haussman; its allure of romance immortalized by countless movies and books; its elevation of the sublime pleasures of savoring food, whether it be fine cuisine or fanciful desserts.

It’s always a good time to visit Paris, but Christmas time – when the city is wreathed with adornments and even more dazzling with its light displays – might just be the best time to be in the French capital. Here are some of the things you should not miss when ringing in the Yuletide season in Paris. Enjoy the sensory delight of baubles, biscuits and brews at the Paris Christmas markets. All the flavors of the season are on display for your eyes and palate to feast on. Stalls that are called and made to resemble chalets sell anything from décor, trinkets to local and regional produce and delicacies. In Paris, there are several Christmas markets that all over the city. There is a small quaint one at the Place Saint Germain, a bigger one at La Defense, a homey cluster at Bercy Village and one long stretch at the Champs Èlysèes.

Most of the markets, except for the one in Bercy Village, are made up of outdoor chalets (stalls) and after awhile, shopping in the cold begins to catch up with you. A cup of hot chocolate or warm wine (vin chaud, as it is called, is served up with flavors and spices) help keep you warm. Top off with a crepe (for just 4 euros for a basic butter and sugar) and you have a perfect Christmas market snack.

And just when your hands start to freeze, you can get a steaming mug of hot chocolate or hot wine.

2. The Illumination of the City of Light

It was the late 18th century when Paris became one of the first European cities to use gas lamps to illuminate its dark streets and make them safer. That earned Paris its nickname, City of Light or Lumieres de Ville.

During Christmas, various parts of the city are swathed in a shimmery blanket of dainty twinkles and its world famous landmarks are illuminated in majestic grandeur.

Winter brings shorter days and the sun turns in early as early as 5pm, giving you more time to revel in the dazzle of the city. All you have to do is look around you or look up. There are about 200 trees that line this 1.9 kilometer avenue that starts from the Arc de Triomphe and ends at the Place de la Concorde.

During Christmas, the trees are draped with glimmering sparkles that change color. Many of the stores along the Avenue des Champs-Élysées are wrapped in decorative lights. The avenue is home to various corporate headquarters and boutiques like luxe brand Louis Vuitton and mainstream favorite, H&M. The Hôtel de Ville has been the seat of the Paris local municipal administration since the 14th century. During Christmas time, the front of the Paris City Hall is turned into an ice skating rink. The laughs, teasing (mostly when someone falls) and giggles add to the festive vibe in the city. The Obelisk, also known as Cleopatra’s Needle, is the other landmark that stands tall at the Place de la Concorde. It was a gift of the Viceroy of Egypt to King Louis Philippe. Place Vendôme is located near the Louvre and the Tuileries Gardens. It is the starting point of the Rue de la Paix, known as one of the finest and most luxurious streets in Paris. If there were such a thing as The Center of Fashion in Paris, Avenue Montaigne would be it. Haute couture fashion houses line the street from end to end, making this rue known as The Fashion Boulevard of Paris. The  façade of the oldest department stores in Paris like Galleries Lafayette, Printemps Haussman and BHV become a glittering flashing display during Christmas.

The icon of Paris lights up throughout the year in the evening. But during the holiday season, the illumination of the Eiffel Tower is like the star on top of the Christmas tree. It is hard to believe that when it was first constructed, the Eiffel Tower was hated by many Parisians who thought that it was an eyesore. Pâtisseries of all sizes, from small boutique stores to multi-level buildings beckon to every city visitor or dweller with a sweet tooth or simply loves delicious, beautiful things wrapped in small packages. Colors of the season, in flavors like dark chocolate, white chocolate infused with cinnamon, hazelnut and almond. Your only dilemma will be how to choose and how to stop at just one.

Try to resist if you can. It’s a lot harder than it sounds considering that there are, without exaggeration, plentiful patisseries, and boulangeries (bakeries) can be found on every street corner in the city where sweets are served up right next to everyday staples like baguettes and croissants. Paris, Paris – the City of Light, illuminating your dreams. – Rappler.com
Ana P. Santos writes about sex and gender issues. Seriously. She is also a regular contributor for Rappler apart from her DASH of SAS column, which is a spin off of her website,www.SexAndSensibilities.com (SAS). Follow her on Twitter at @iamAnaSantos.