MANILA, Philippines – To visit Bucas Grande Island in Surigao del Norte is to discover a world hidden in a labyrinthine terrain, a world where hilly and rounded islets, each covered in thick evergreen, dominate the landscape.

From afar, these mountains of lush greenery leap out at the eye in full three-dimensional glory. There is more to it visitors can enjoy once they get to its inner recesses.

Among them are pristine lagoons, sea caves, coves and lakes, some of which are still undiscovered, while others can only be accessed in certain conditions. The sail to the Jellyfish Sanctuary requires transferring to a small paddle boat that can carry two to three persons. Keeping the natural environment is a priority to the island’s caretakers, so a motorized boat is prohibited in this part of the island.

As the boat sails forward, more details of this part of the island are revealed.

The mountains are limestone deposits; the water is clear and shallow, making some marine species visible at the bottom. Among them is “tajum” (sea urchin) which used to dominate the area when it was not yet known as the Jellyfish Sanctuary.

At the entrance is a narrow passageway, walled with limestone rocks on both sides and covered in a canopy of protruding branches of wild plants and trees.

With only the sound of the flowing water and the rowing paddle can be heard in the area, one could easily guess where this is heading – a tranquil body of water set in blissful seclusion.

Indeed, the lagoon is a grand expanse of still turquoise water, making the shadows and outlines of corals in full grandeur visible underneath.

Millions of jellyfish start to show up in the months of March until May, and they bloom into full grandeur, from July until August.

During those months the lagoon becomes filled with millions of non-stinging jellyfish. How many these actually are, visitors can easily lose count. During off seasons like in the month of November, the jellyfish of different sizes are nowhere to be seen. That could be disappointing.

Thankfully, the lagoon itself is a sight to behold. 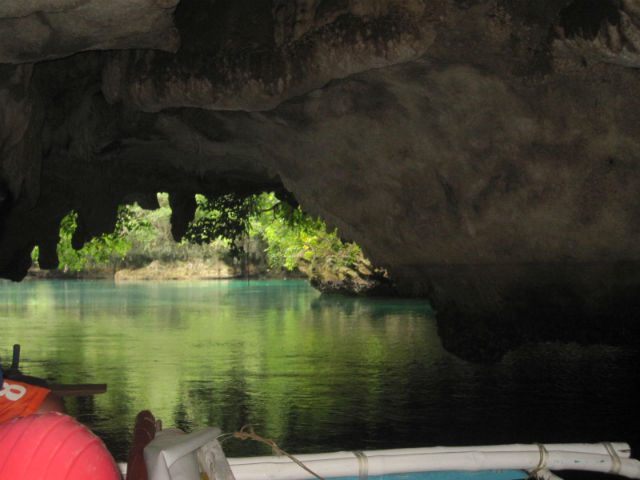 Sohoton Cove derives its name from the Cebuano word so-oton which means to pass through a small opening. Why it is named as such, visitors would know when they reach the one and only opening to the cove – a cavernous expanse with very low ceiling. During high-tide this is not accessible. The next time your eyes catch a glimpse of light, you’re transfixed by the surreal world of Sohoton.

Interesting natural features greet visitors, taking in odd and colossal forms to stand out from the familiar viridescent, mountainous backdrop of the island.

There is the til-il sa kabayo (horse tail) which tour guides consider a landmark when going in and out of Sohoton. There are also the petrified trees that stand as hard as stone and as white as ivory, while the bare cliff seems spectacular amidst the jungle-laden islets. If these features can be admired in the open, others are concealed in secret coves and caves. In Hagukan Cave, green water glows, illuminating the dark, hostile cave. The snore-like sound that the wave produces inside makes it feel like the cave is actually a sleeping beast. In Magkukuob Cave, visitors have to wade in waist-level water to get inside, walk like a duck to reach the dry path and stand in the middle of a spectacular collection of rock formations.

To exit the cave, visitors have to take a brief climb up a very steep path and choose whether to take the plunge or go back to the entrance to complete the caving episode. For first-timers, jumping off a platform that is suspended from a cliff, 12-feet above the water, is a memorable feat. In the end it’s not about how experienced (or inexperienced) a person is that counts. It’s about managing the crazy feeling that a scary stunt like cliff diving gives that matters. Touring Bucas Grande Island does not end in Sohoton Cove. White sandy beaches, inland lakes, fishing grounds, snorkeling sites, and crystal caves can also be found in the island for visitors to explore and marvel at. That’s not to mention that it’s amazing how everything remains unspoiled and the tranquility that envelops the area undisturbed.

It is as if a thin sheet of blanket were blocking the noise outside, allowing only the chorus of various chirping birds to penetrate the invisible shield. – Rappler.com