IN PHOTOS: The floats of Panagbenga Festival 2015 Facebook Twitter Copy URL
Copied
A 'How to Train Your Dragon' float, a Birdman on the streets, a train of creativity and more

The Float Parade and the Street Dance Parade are considered the two major highlights of Baguio’s Panagbenga Festival. Thousands of spectators from Baguio City and from all over the country filled North Drive (below SM Baguio) to the Burnham Park Athletic Bowl to witness this year’s float entries. (READ: IN PHOTOS: The vibrant street parade of Panagbenga Festival 2015) The floats, designed, put up, and decorated for weeks before the unveiling today, were carefully structured to suit this year’s Panagbenga theme “Across 20 years of blossoming together” and the Baguio and Cordilleran culture of beauty, love for nature, and affinity for kin. One entry, for instance, was designed as a “train of creativity” bearing elements that remind us of music, dance, and craft arts—things we bask in when we are young and searching for identity. 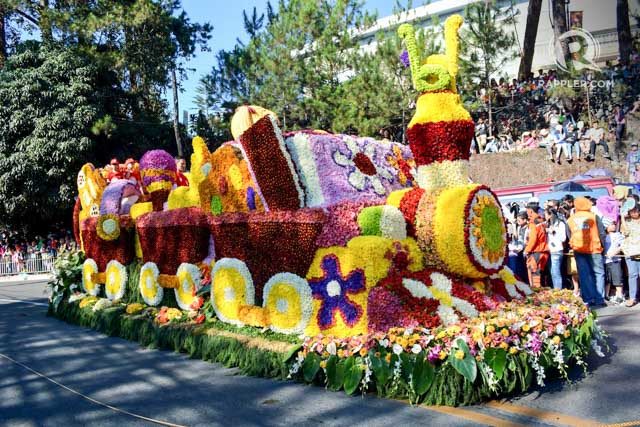 Another float embedded nature by featuring birds, rabbits, butterflies, and other animals to depict the beauty of creation. French Circus was the theme for another float, with clowns dancing around it as it drives down Session Road. One entry featured the eponymous character from this year’s Oscar Best Picture Birdman. Another featured the best of the Philippines by turning their float into a plate of Philippines’s best sceneries such as the Banaue Rice Terraces, Gardens of Malasag in Cagayan de Oro, and Zamboanga’s golf courses.

All these, of course, are carefully depicted using flowers from the Cordilleras. Baguio Country Club (BCC), the Hall of Fame Winner for the Float Competition, came up with a new wonder. This time, they used Pixar’s How To Train Your Dragon as a reference. “The Float Parade is a culture of pride and excellence,” Abdula Mastula, BCC’s float overseer, remarked. “It’s a great opportunity to create and share something beautiful.

Flowers most prominently used in the floats are anthurium, chrysanthemum, astrobelia, orchids, mums, roses, and what is deemed Baguio’s original flower, everlasting. Artists who graced the event and rode the floats are Kristine Hermosa, Oyo Boy Sotto, and Ogie Alcasid. 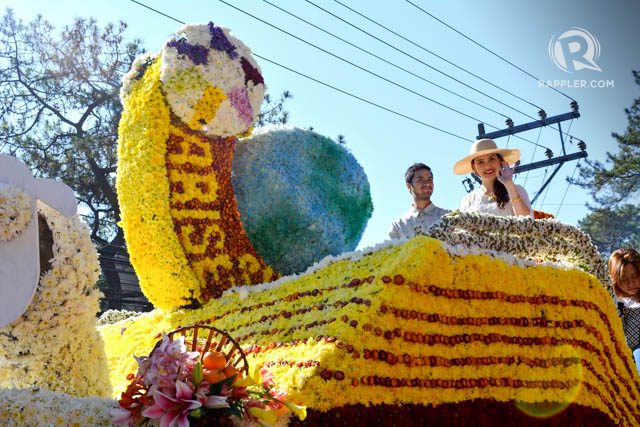 Session Road is closed after the Float Parade to give space for Session in Bloom, where street cafes and souvenir and sale stalls are installed for a whole week until Panagbenga’s closing on March 8.

All photos by Ivan Jim Layugan Ivan Jim Layugan is a writer based in Baguio City. His essays appeared in local and national publications. He just started his postgraduate studies on language and literature at the University of the Philippines, Baguio.