Facebook Twitter Copy URL
Copied
Every time the fairies touch the water, say the locals, it becomes clearer as the ripples disappear

HINATUAN, Philippines – Local lore goes that during the night, fairies, pixies and mermaids gather together to play and sing around the clear bluish water of a river in the town of Hinatuan.

Every time the fairies touch the water, it becomes clearer as the ripples disappear.

Once a destination braved only by those who want adventure, the dirt road going to the Enchanted River is now being constructed into a long stretch of concrete. (READ: 9 spectacular places to visit in Mindanao)

Despite the developments, including cottages, the mystical feeling in the area still remains, with palm trees and indigenous flora surrounding the placid river.

On the left side, a deep chasm, believed to be at least 80 feet deep, commands reverence and at the same time invites those who are bold enough to explore its complicated network of underwater fissures. 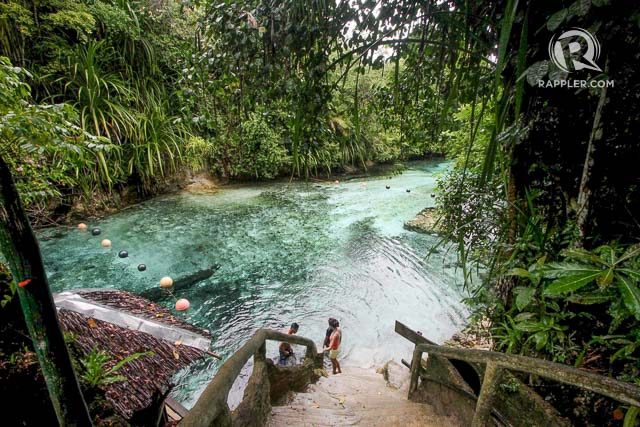 And as the clock hits noon, the Hinatuan Hymn is played from loud speakers. Like an ancient ritual, people who are swimming immediately paddle back to land while the fishes assemble near the riverbank.

Felecisimo Baguasan, caretaker and lifeguard at the Enchanted River, starts throwing cooked rice and sliced octopus meat at the water, which the fishes start to gobble like there is no tomorrow.

“These bluish waters have not changed since I was a kid. Despite the typhoons, it remains like this. I think that is why it is called the enchanted river,” Baguasan said.

Stories of fairies and pixies are popular among the locals. Baguasan said that the fairies and pixies, along with mermaids which they say swim upstream, protect the river, most especially from outsiders. (READ: Perfect for summer: 8 cool-weather PH destinations)

“Different generations and witnesses have different versions of their stories. But what we are sure that it is inhabited by mystical creatures,” Baguasan said.

Baguasan added that there are many experiences and stories wherein some visitors got “unexplainable” body pains, boils or itches after taking a bath in the river.

“Some, most especially those who are irreverent and noisy, will acquire afflictions that cannot be explained,” Baguasan said.

But there is no need to be afraid, he quickly added, explaining that tourists should only respect the environment if they do not want to get any afflictions from the fairies and pixies.

Several professional divers have attempted to explore the brackish waters and the underwater compartments at the river.

“Many foreigners attempted to reach the bottom but until today, no one has ever reached it,” said Baguasan.

Cottages have already been built in this area,  while local fisher folk sell fresh fishes, crabs and lobsters, which they are more than willing to cook for the visitors.

For the children, a portion of the river was transformed into a kiddie pool.

Baguasan said that they are urging the government and tourists to help in preserving the beauty of the enchanted river. – Rappler.com

Note: Tourists are encouraged to coordinate with the local tourism office when visiting. Various security agencies have noted the presence of rebel groups in the CARAGA region, including Surigao del Sur.