Apr 27, 2015 7:18 PM PHT
Will Hatton
Facebook Twitter Copy URL
Copied
'I must thank all of the amazing Filipinos who reached out online and advised me to visit this truly stunning place.' 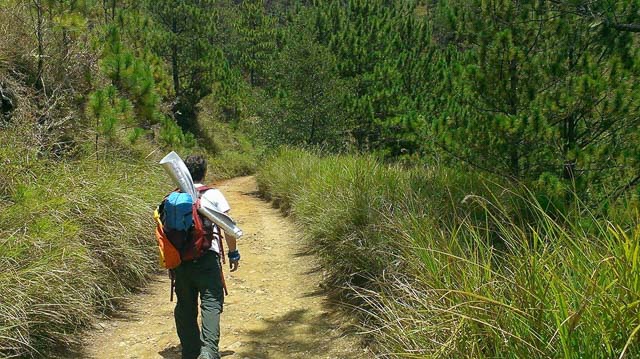 This is part 1 of British backpacker Will Hatton’s travel diary documenting his first trip to the Philippines. Follow along with his Philippine adventure right here on Rappler.

Seven thousand islands and change… that’s what I had been told. The Philippines had been calling to me for years but somehow I had never made it there.

I have been backpacking on a budget for years now, hitch-hiking, couchsurfing and picking up odd jobs to fund my lifestyle.

More recently, I have been blogging about my experiences over at thebrokebackpacker.com in the hopes of inspiring others to ditch their desks, stick out their thumbs and hit the road.

My dream is to find the perfect country to settle down in and finally open my own hostel. Perhaps The Philippines would be the right choice?

I arrived with no idea of what to expect. I didn’t even have a guidebook. I met up with a bunch of unbelievably enthusiastic Filipinos in Manila and hastily made notes on everything they recommended I visit.

This trip was going to be totally unique, I was not going to plan anything, I was simply going to go wherever Filipinos suggested. We drank, we sang, I tried balut (everyone insisted!) and, the very next day, I hopped on a bus towards Baguio. First stop: Mount Pulag.

Frozen air crept through the night as I snuggled deeper into the blanket wrapped around me like a shroud. I was the first up, the camp only just beginning to stir. It had been an uncomfortable night, I had barely slept as the temperature had plummeted and my feet had turned to blocks of ice. Would it be worth it? I had no idea what to expect.

I stood, transfixed, the stars above me twinkling brightly in the darkness.

I have witnessed many stunning skies, I have seen stars from the Sahara desert, from Himalayan peaks and even from the Caribbean sea; never had I before seen stars quite as bright as those above Mt Pulag. (READ: Mt. Pulag: Beyond climbing) 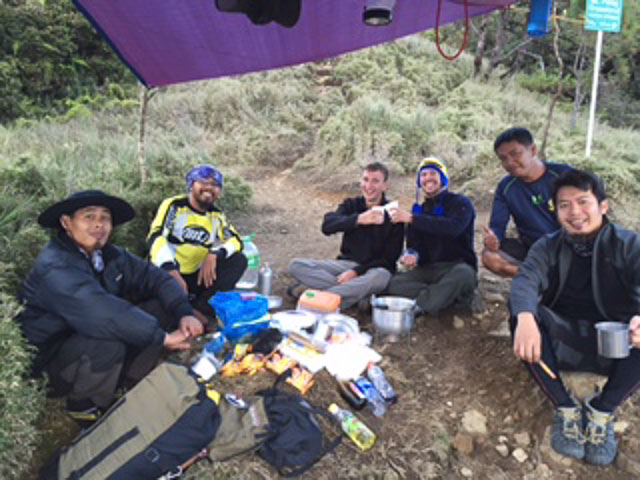 I took another minute to soak it in and then fumbled for my head-torch. I was joined by an eager Pinoy backpacker in a bright blue down jacket and an English couple backpacking around Asia. Together, we set off into the darkness in search of adventure.

Soaking grass pulled at my trousers as I followed the rough path out of the camp and into the hills. I could see the outline of Mt Pulag ahead, blocking out the sky, rising up out of the darkness like some kind of forgotten monument. I could barely see three meters in any direction but my Filipino friend, Jose, urged me onwards and together we plunged on.

As a group, we tackled the path, forcing our way through tangles of grass obscuring our route. Slowly but surely, we began to climb. The top of Mt Pulag beckoning to us through the pre-dawn chill. (READ: The sun and the moon at Mount Pulag)

We arrived almost without warning, the path simply ending and spitting us out atop the summit of Luzon’s highest mountain. We turned and spotted a trail of faint glows, head torches in the mist, stretching across the grasslands and back towards the campsite.

Unknown shapes danced in the darkness as the sun slowly began to rise, still out of sight, in the distance. I strained my eyes, I could just about make out what almost looked like an endless ocean of clouds. 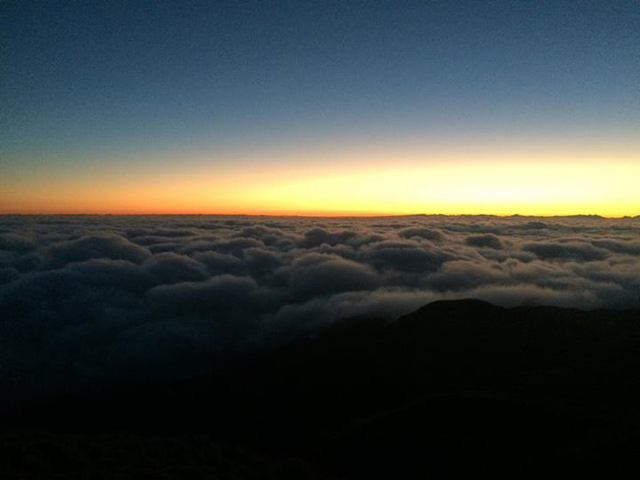 A group appeared and hurriedly began setting up all kinds of photographic equipment: GoPros for timelapses, cameras for sunrise shots and, of course, selfie sticks for their phones!

Almost on cue the sun obliged us and began to rise in the distance. Slowly, surely, the scene below me was revealed. 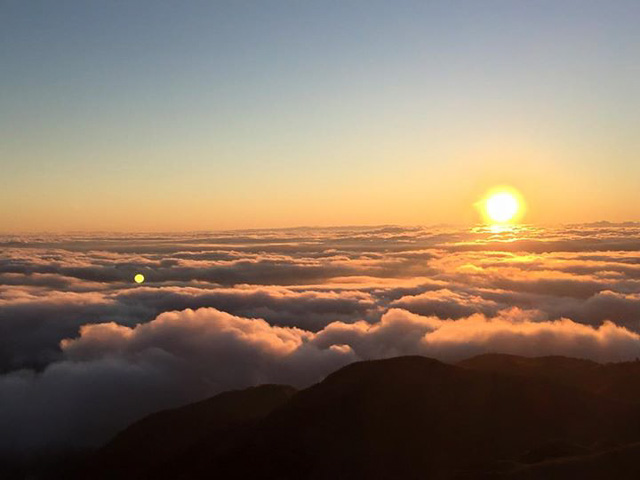 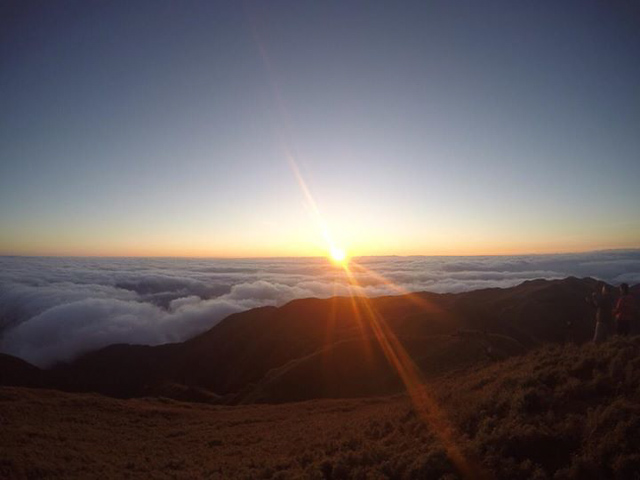 I had to sit down and catch my breath.

An endless plain of fluffy white clouds stretching as far as the eye could see. Psychedelic patterns weaving and turning in the clouds, the sun coloring everything shades of orange, pink and gold. A Pinoy backpacker sat next to me, beaming happily. “This is the most amazing thing I have ever seen” she whispered under her breath.

I myself have tackled steaming jungles and endless deserts, perilous peaks and mysterious caves; no challenge was too great in my quest to witness the perfect sunrise. (READ: Climbing Mt. Pulag’s Akiki trail)

I had never thought that the perfect sunrise which I had been seeking would reveal itself upon a mountain I had never heard of in a country I had only just arrived in. 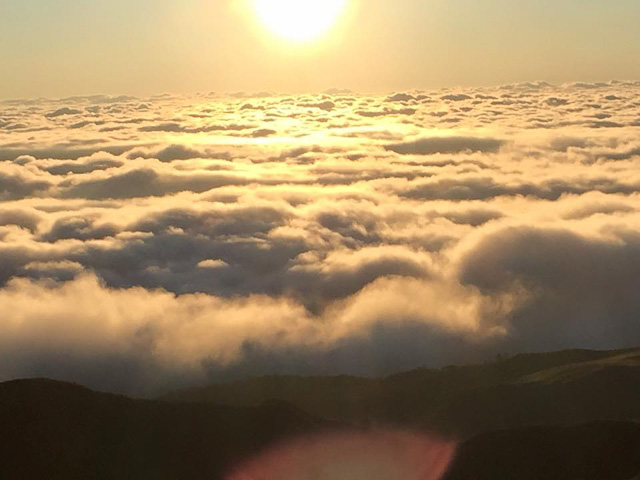 I made a mental note; I must thank all of the amazing Filipinos who had reached out online and advised me to visit this truly stunning place.

The view from Mt Pulag on that frozen morning may just be the most incredible thing I have ever seen. Clouds raced towards us and disappeared into a nearby valley, tumbling onwards like a river. I sat, content yet cold, soaking in the first rays of warmth from the sun.

I was jealous of the other travelers; they all had good gear and looked warm!

I, on the other hand, was clad in bin-bags, a borrowed blanket and a Minion hat – it was not a good look but it didn’t matter, I had seen the Sea of Clouds! 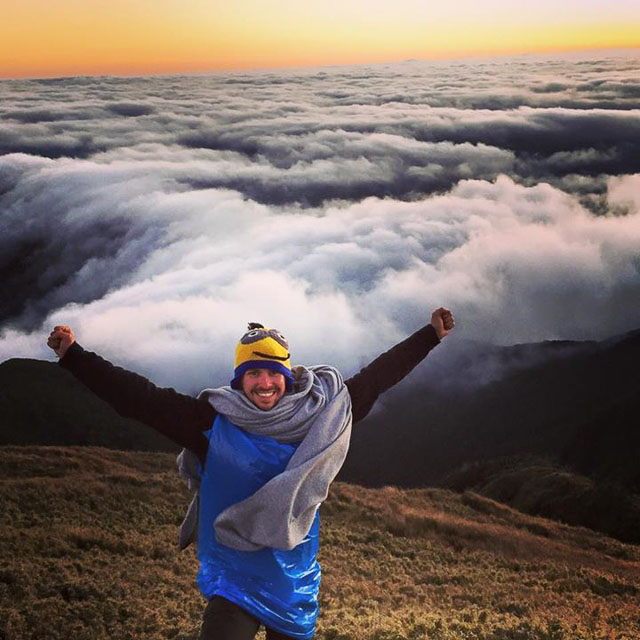 Slowly, reluctantly, we began to leave the peak in twos and threes. Back at the camp, I joined Jose and some of his friends for a tasty breakfast of tiny sausages, rice and strong black coffee – just what I needed to get down the mountain and back to reality.

I packed up my gear and prepared to leave. I paused, turning to look at Mt Pulag one more time. This was a truly special place. If the rest of the Philippines were anything like this, well, I doubted I would ever want to leave.

From Mt Pulag I plan to head to Sagada to explore the hanging coffins, twisted caves and luminous paddy fields of this famous backpacker mecca.

After that, I’m meeting with a couple of Filipino friends who are taking me deep into Kalinga territory to meet with Whang Od, where I hope to receive a Filipino tattoo. I haven’t yet decided upon the design but this is something I have wanted to do for a long time.

From there, I’m making a dash for Manila to take part in an airsoft competition (did I mention I like running around a lot!?) before I fly to Palawan with the hopes of marooning myself on an uninhabited island for a few days armed with my trusty knife and a battered tent…

Experience my Philippine adventure with me right here on Rappler, as I document my first trip to the Philippines as it happens. Wish me luck! – Rappler.com

Writer and photographer. Adventurer and vagabond. Master of the handstand pushup. Conqueror of mountains, survivor of deserts and crusader for cheap escapades. Will is an avid hitch-hiker, couch-surfer and bargain-seeker. He is a devout follower of the High Temple of Backpackistan and the proud inventor of the man-hug. Will blogs over at thebrokebackpacker.com about his adventures around the world, you can follow him on Facebook and on Twitter or, if you’re really friendly, hunt him down on the road for a cheeky pint. Currently, he is traveling around the Philippines.