Facebook Twitter Copy URL
Copied
'Tiny droplets of blood decorated my arm as slowly but surely, Whang Od continued to breathe life into the design with her bamboo hammer.'

This is part 3 of British backpacker Will Hatton’s travel diary documenting his first trip to the Philippines. Follow along with his Philippine adventure right here on Rappler.

The wind whipped my hair into a frenzy as I sat, my eyes drawn forwards by the plunging landscape.

Below me, a dozen Filipinos lounged on hard wooden seats. I sat atop the jeepney alone, luminous green paddy fields stretching away from me in all directions.

I was leaving Sagada and heading deep into the tribal territory of the Kalingas. I was on a pilgrimage to visit the legendary Whang Od; a nonagenarian who is one of the last in the world to claim the title of Mamababatok; the tattoo master. For decades, Whang Od has kept the traditions of the Butbut tribe alive by tattooing with thorns, charcoal and a small bamboo hammer. Now, I hoped to join the privileged few who could say that they had been tattooed by the last Kalinga tattoo master. First, I had to get there.

Hours dragged past as I waited in the dusty frontier town of Bontoc. I was meeting some Filipino friends, although I had no idea what they looked like. I hoped they would find me, it shouldn’t be hard, I reasoned, I was the only white face for miles. I sat, snacking on fresh mangoes and chatting with a bored policeman, until finally my friends; Pot Pot, Jindra and Dada arrived. 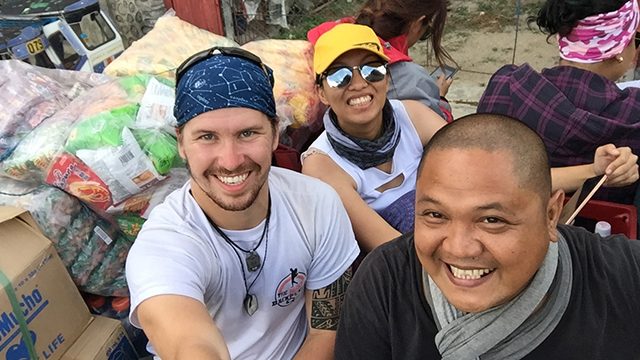 Pot Pot was the leader of our gang, a constantly smiling, always giggling, in his late thirties, who somewhat resembled a small buddha with his shaved head and twinkling eyes. He urged me to climb atop yet another jeepney and with a belch of exhaust fumes we left Bontoc behind us.

We raced further into the country, taking hair-pin bends with reckless abandon, bouncing along on top of the Jeepney as we climbed into the mountains. We passed deep ravines and soaring hills, countless paddy fields, farmers carrying goods to market, children playing in the road, herds of hogs snuffling in the undergrowth and tiny hamlets, clinging to the tiny space between the road and a vertical drop. The jeepney took us as far as possible before the road dwindled to nothing and we got out to continue on foot.

I shouldered my pack and set off into the jungle, following some kids with some extremely unhappy chickens tied to sticks. Slowly but surely we traipsed further from the road and higher into the hills. An hour later, I could see ahead a small village perched atop a particularly steep-looking hill. I turned, catching the last rays of the sun as they slipped across the valley, and decided I better hurry up. It was going to be dark soon.

I arrived at the village without warning, one minute I was still on the lonely path, the next moment, I burst from the jungle and was standing next to a wooden shack with a tin roof. Animal skulls and chicken feet hung from every square inch of a nearby house.

In ones and twos, the villagers came out to greet us, they spoke only limited English but luckily Pot Pot acted as a translator and before I knew it I was whisked away by a friendly family and shown a place where I could lay my pack and sleep for the night. I crashed almost immediately, exhausted and all too aware that tomorrow I would finally be meeting with Whang Od. She didn’t look like she was in her nineties. She was sprightly, humorous even, and smiled from beneath a heavy black hoodie – the kind of thing a teenager might wear. I had spent most of the morning agonizing over what tattoo to get and had, in the end, decided upon a fern; a symbol of rebirth and, I later found out, fertility.

Whang Od carefully outlined the tattoo upon my arm using charcoal and a small stick. 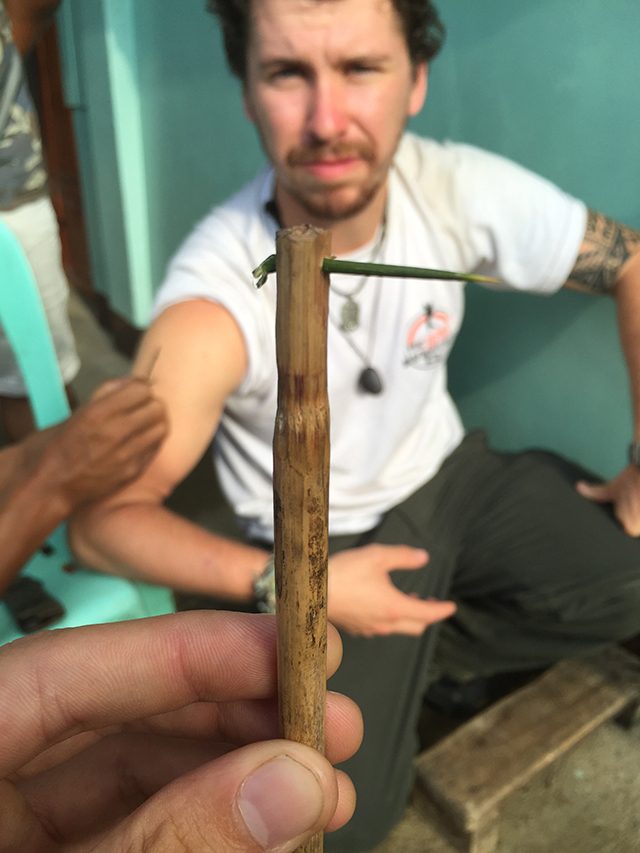 Next, she picked a sharp thorn and placed it carefully within another stick before glancing at me, checking that I was ready and preparing her hammer. I sat on a hard block of wood, watching with grim fascination as she lifted the stick and began. Whack, whack, whack. I felt nothing. I watched as the thorn punctured my skin again and again, forcing the charcoal inside the wound, five times a second. The musical noise of the hammer drifted across the village as a crowd of interested villagers watched to see if I would reveal any sign of pain. I did not, for in truth, it really did not hurt. I had waited years to meet this incredible woman. I had traversed valleys and hiked through jungle, ridden atop metallic-death vans and endured belching fumes; what was a few pin-pricks to mark the successful completion of my journey?

Tiny droplets of blood decorated my arm as slowly but surely, the design came to life upon my flesh. It crawled and writhed as Whang Od continued to breath life into it with her bamboo hammer. I could think of no better way to pay homage to this incredible woman and to The Philippines itself than to get a traditional tattoo… this was an idea I had been knocking around for years and, as I watched the tattoo take over my arm, I knew I had made the right decision. – Rappler.com

All photos provided by Will Hatton

Writer and photographer. Adventurer and vagabond. Master of the handstand pushup. Conqueror of mountains, survivor of deserts and crusader for cheap escapades. Will is an avid hitch-hiker, couch-surfer and bargain-seeker. He is a devout follower of the High Temple of Backpackistan and the proud inventor of the man-hug. Will blogs over at thebrokebackpacker.com about his adventures around the world, you can follow him on Facebook and on Twitter or, if you’re really friendly, hunt him down on the road for a cheeky pint.