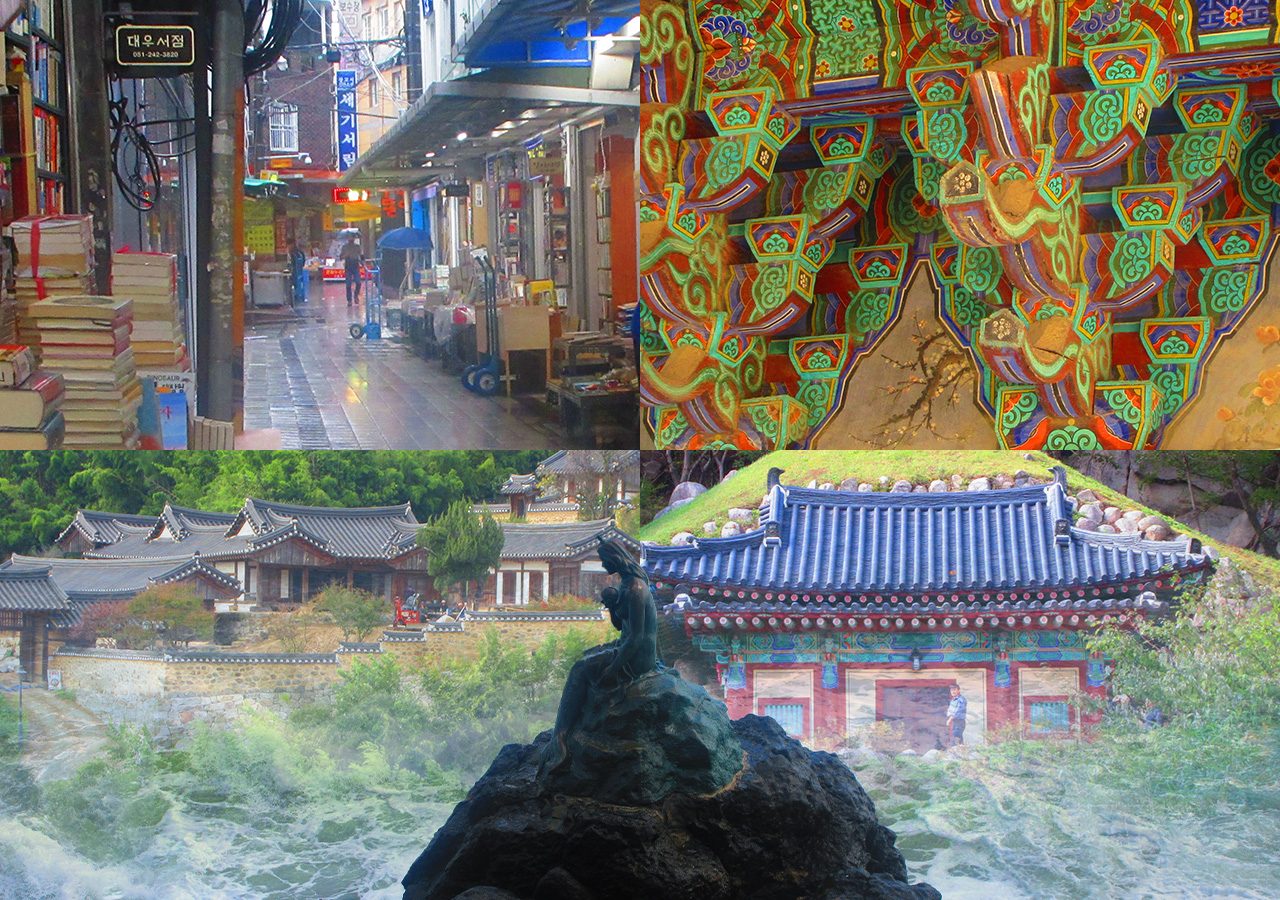 Busan is a city in the southern part of South Korea. With more than three million people living in Busan, it is the second largest city (in terms of population) after the capital Seoul. The city’s location along the coast makes it a popular summer destination for locals and visitors alike. However, many still jog, walk, or even swim in the beach during the colder months of the year. The city itself has a lot to offer tourists visiting for a few days. There are ancient temples, beaches, scenic trails, quaint walkways, a vibrant street food scene, the Busan International Film Festival, and other attractions. While you’re here, it’s also possible to visit other popular tourist destinations such as Gyeongju.

You’ll need a visa to enter Korea and travel on your own; however, there are exceptions which allow you to visit South Korea without a visa. For one, Filipinos would need to fly in and out of Yangyang International Airport with a tour package booked through a designated travel agency. Filipinos can also enter Jeju Island visa-free as long as it’s also their point of entry and exit.

If you’re planning to get a visa, here are the general requirements:

Requirements vary depending on your category.

*You can check out the embassy’s site here to learn which category you’re under.

*Here’s how you can book an appointment online.

*You could also apply for a visa through an accredited travel agency. Here’s a list.

Philippine Airlines (PAL) has direct flights from Manila. Book during seat sales to get the lowest possible prices. You also have the option to fly to Seoul and then take another flight to Busan. If you think two flights are too expensive, you can travel by land from Seoul to Busan. There are direct buses traveling to Busan from Incheon Airport. Fare is around KRW45,000, and you can book tickets at the airport. If you’re already in Seoul, you can take the train. The fastest train to Busan is the KTX; fare for this is up to KRW60,000 one-way. The slower train is cheaper but takes longer (of course), fare is approximately KRW32,000. You can take the same route back if your flight leaves from Seoul.

Traveling around Busan is easy and convenient because of its rail and bus network. My public transportation of choice is the metro, even if some of the stops are 1 km or farther away from my actual destination. The metro network is just easier to navigate compared to taking buses. You can buy a day pass for around KRW5,000. With that ticket, you can go from one end of Busan to another. It’s cheap and convenient to do as much sightseeing during your visit. However, some attractions require taking buses. You can use your Cashbee or Tmoney card whenever you take the bus or metro. A card costs around KRW2,500. You can top it up whenever it runs out of money.

I liked Busan more compared to Seoul. It’s a big city but some of its districts are right next to the beach. Its location along the coast gives the city a chill vibe. Day passes for the metro make it easy and affordable for visitors to get wherever they want to go in the city. It also serves as a hub to nearby cities you might want to visit such as Daegu and Gyeongju. For this guide, you’ll be visiting the latter for at least two days.

Spend your first full day by exploring Busan’s urban sprawl. As the second most populated city in South Korea, you’ll find plenty of markets and pedestrian lanes for both locals and tourists. Some nice places to grab a bite, window shop (or actually shop in), or simply just walk around in are Nampodong Market, BIFF, Gwangbok-ro, and Seomyeon. Here you’ll find local restaurants, shops, fast food, street food, and neon lights. Seomyeon has a metro station nearby while Nampodong, Gwangbok-ro, and BIFF are all near the Nampo metro station and are within walking distance from each other. Not too far from Nampo station is another well-known market in Busan – Jagalchi. The latter is a huge fish market (in fact the largest in South Korea). The vendors sell various seafood you can buy. You can then have it cooked and served. Servings are huge and good for groups.

Make your way to a quaint part of the city by taking the metro to Jungang. Walk towards the 40-step Culture & Tourism Theme Street. This staircase may seem ordinary but its actually important to the city’s history during and after the Korean War. Many refugee families would reunite on these steps. This area is now home to a few cafes and shops. Not too far is the Bosu-dong Book Alley. It started with just one bookstore, then a few more bookstores sprouted up since the 1950s. Most of the books here are in Korean though, but it’s a nice place to walk through.

End your first day with a trip to Gamcheon Culture Village. This quaint neighborhood has colorful houses perched on a cliff. You’ll find art shops, cafes, restaurants, and others during your trip here. The best time to go is just before sunset when the changing colors of the sun make a perfect backdrop for the multi-colored houses. It’s quite far from the center but you can reach it by public transportation. Alight at Toseong metro station then walk to Pusan National University Hospital. Board bus 2, 2-2, or 1-1 at the stop near the hospital.

Spend your second day visiting a couple of beaches and a temple. Haeundae and Gwanggali Beach are popular destinations regardless of the season. You can take long walks along the shore or go swimming and do other water activities depending on the season. There are nearby restaurants and food stalls if you want to have a snack or picnic. You can easily spend hours in either stop depending on how you pace your trip during the day. You can also walk all the way to Dongbaekseom Island from Haeundae Beach as a short walking trail and get full views of the shore with the city as a background.

From Haeundae metro station, board bus 181 to Haedong Yonggung Temple. This striking temple on a cliff is one of the prettiest in South Korea. Its history dates to the 14th century (around the 1370s). You’ll find the usual statues and architecture related to Buddhism during your tour of the complex. The popularity of this temple draws droves of people throughout the day, but it’s still a noteworthy addition to your itinerary. You can end your day here to watch the sunset.

Visit a couple of temples during your third day in Busan. Make your way to UNESCO-listed Tongdosa by taking the metro and head on over to Nopo station. Go to the central bus station and catch the bus bound for Tongdosa; fare is around KRW2,500 per way. This destination is one of Korea’s Three Jewels Temples, the other two are Songgwangsa and Haeinsa. It dates to 646 when a monk established it after a trip to China. There’s a KRW3,000 entrance fee.

Make your way back to the metro station and alight at Beomeosa. After exiting, go to the stop where you can board bus 90 to the temple. The temple complex is part of the Jogye Order. The complex is scenic and serene with halls, pagodas, and gates.

Head back to your accommodation to pick up your bags before taking the bus to Gyeongju. There are direct buses that go to Gyeongju from Busan. Take one from the Central Bus Terminal near Nopo metro station. Fare is roughly KRW4,800 one way.

Gyeongju is a small city compared to Busan and Seoul, but it’s a historic one. It was the Silla Kingdom’s capital when they ruled a huge portion of Korea back in the 7th to 9th centuries. Fast-forward to today, you’ll see UNESCO-listed vestiges of the city’s storied past during your visit.

Gyeongju is small enough to navigate in a day, but I’d recommend two full days so that you won’t rush through places. Once you make your way to the center, you’ll immediately notice the burial mounds that date to the Silla Kingdom. You can enter one of the mounds for around KRW3,000. Inside you’ll see displays of ancient relics. Walk for a few minutes to see Cheomseongdae. The latter is a centuries-old observatory dating to the 7th century. Another nearby attraction is the Wolji Pond which used to be part of a palace complex during the Silla Kingdom’s reign. The entrance fee for this is KRW3,000.

You could add Bulguksa and Seokguram to your itinerary. Take bus 10 or 11 from the intercity terminal to reach Bulguksa. Then you can hike to Seokguram after. Both temples are UNESCO World Heritage Sites. There is an entrance fee of KRW5,000 for each attraction. These attractions are also scenic with walking trails.

Go on a half-day trip to nearby Yangdong Village from Gyeongju. Take bus 203 to reach the village from the intercity bus terminal. There’s an entrance fee of KRW4,000. This village is centuries old, dating to the 15th century. Here you’ll see traditional houses where the aristocracy used to live with nature as its backdrop. Walk around and soak in the ambiance while learning about how Koreans used to live. You can eat a traditional meal or spend the night here if you have the time. After spending a few hours in Gyeongju, take one of the buses that depart for Busan.

Go last-minute souvenir shopping in Busan depending on the time of your flight and if your return flight to Manila is in Seoul.

You can work with a budget of KRW45,000 per day or roughly P1,800. You’ll be staying in a hostel dorm, eating at local markets with the occasional restaurant, and taking public transportation with lots of walking. You’ll get to visit multiple attractions with this budget as well. This doesn’t include flights. It’s possible to spend less depending on your overall budget. Busan and Gyeongju are affordable and good-value Korean destinations. It’s possible to combine these two with a longer trip including Seoul. You’ll spend more if you stay in private rooms, take taxis, shop, go out every night, and eat at restaurants for all your meals.

Joshua Berida is a writer that loves to travel. He blogs at www.thewanderingjuan.net.