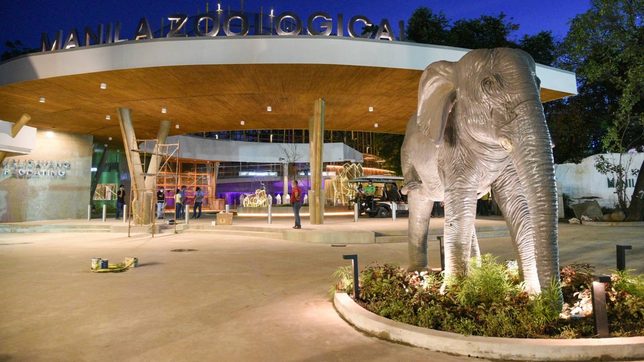 NEW. The renovated Manila Zoo will have its soft opening on December 30.

MANILA, Philippines – The Manila Zoo just got a major makeover, and we’re zoo excited to see the new and improved facility!

A sneak peek of the New Manila Zoo was released via the Facebook page of the Manila Public Information Office (PIO) on Wednesday, December 22. Photos showed Manila Mayor Isko Moreno Domagoso and Vice Mayor Honey Lacuna touring the newly-renovated Manila Zoo for the first time, as well as the new interiors and exteriors of the facility.

The new, modernized five-hectare Manila Zoological and Botanical Garden is slated for a December 30, 2021, soft reopening. According to the Manila PIO, 99.9% of the renovations have been completed. The zoo animals will be taken to their respective enclosures starting Monday, December 27.

Among the renovations of Manila Zoo are transparent glass enclosures for the animals (including Mali the elephant), elevated viewing decks, a viewing loft at the Butterfly Garden, and separate partitions for Filipino endemic animals and birds. The Animal Museum and Botanical Garden have also been revamped, as well as the pathways around the facility, which are now elevated and wider.

Night visitors won’t have to worry – the zoo will be well-lit in the evenings, complete with night attractions of dancing fountains and mini waterfalls around the lagoon.

For the December 30 soft opening, the mayor will be prioritizing the project’s 1,300 construction workers and their families as the zoo’s first VIP guests. City officials will also be providing free food and drinks for them.

The Manila Zoo, which now also has a brand-new sewage treatment plant, is reopening to the public after almost three years, following its closure in January 2019. Joseph Estrada, who was Manila mayor then, ordered the closure of the zoo after the Department of Environment and Natural Resources (DENR) tagged it as a “major pollutant of Manila Bay” as it was found dumping untreated sewage into an estuary that empties into the bay.

This is the first time the Manila Zoo has undergone major renovations since it opened in July 1959. It was home to Bertha – believed to be the world’s oldest hippopotamus – until her death at age 65 in 2017.

The zoo’s most famous resident is Mali, a 43-year-old elephant which had been the subject of a campaign alleging animal cruelty. The campaign to free the Asian elephant, a zoo resident since age 3, had drawn support from Philippine bishops, global pop stars, and  Nobel Laureate John Maxwell Coetzee. – Rappler.com

Before you head to the zoo, check out these Klook deals first!