In line with this, members of the academe and the development sector formally launched the Philippine chapter of the Social Development Solutions Network (SDSN) on Monday, August 3.

The SDSN aims to help find concrete solutions to some of the world’s most pressing environmental, social, and economic problems to achieve sustainable development. SDSN is directed by economist Dr Jeffrey Sachs of the Earth Institute of Columbia University.

SDSN was first established by UN Secretary-General Ban Ki-Moon in August 2012. According to the UN, the initiative seeks to promote collaboration between governments, the academe, civil society, and the private sector.

The points of the SDG will serve as the guidelines for future development policies. In a press conference, Sachs told the media that just hours prior to the launch, in New York, the UN General Assembly finalized the SDG.

“This means 193 governments have agreed in advance for the agenda,” Sachs said.

There were 8 goals put forth in the MDG. For the SDG, there are 17 goals to serve as frameworks for future policies. There was originally 100.

The expanded agenda is a result of the estimate that the world population will rise to 9 billion by 2015 and that global gross domestic product will rise to more than $200 trillion, potentially increasing the risk of social inequality.

The new set of goals aims to involve the private sector and civil society in global development.

The SDGs contain a number of differences from the MDGs. The primary difference is that while the MDGs were crafted by a number of experts from international organization, the crafting of SDGs involved consultation efforts through a 70-state Open Working Group (OWG).

This included “a series of ‘global conversations’ that included 11 thematic and 83 national consultations, as well as door-to-door surveys.” They also had the online My World survey, which asks for what individuals might have wanted to see in the SDGs.

The Philippines is not part of the Asia-Pacific Group of the OWG that helped draft the list.

The UN is set to hold a summit from September 25-27 later this year where they will adopt the final document. The head of the Roman Catholic Church, Pope Francis, is expected to address the summit delegates. (READ: Pope Francis: Beyond reports, action vs hunger more important)

The launch was preempted by a series of public lectures by members of the aforementioned sectors.

Sachs initiated the lectures, discussing the process that went into the crafting of the SDGs.

“It’s very heartening that at a time when we need this concept (of sustainability), rather than arguing about it, the entire global political community has come together to say ‘yes, we will pursue sustainable development…economic development that is socially inclusive and environmentally sustainable…the triple bottom line,” Sachs told the media.

“(The Philippines) is on the frontline of global climate change. We need to reorient our economic strategies so it is holistic, truly sustainable,” Sachs added. (READ: Jeffrey Sachs: Philippines has much to teach world) Balisacan also showed, however, that the Philippines has a “medium” probability of meeting target indicators for income poverty and underweight children and a “low” probability of meeting target indicators for cohort survival or the percentage of enrollees who graduate, gender disparity in political participation, maternal mortality, access to reproductive healthcare, and combatting HIV/AIDS.

After the lectures of Sachs and Balisacan, a panel of reactors gave their opinions on the SDGs.

Dr Emmanuel de Dios, President of the Human Development Network, welcomed the new paradigm of the SDG, adding how it no longer makes sense to continue following the paradigm of development from the days of the industrial revolution or even the tiger economies.

Executive Secretary of the Catholic Bishop Conference of the Philippines (CBCP) National Secretariat for Social Action Fr. Edwin Gariguez expressed his support for the SDG, saying the Catholic Church in the Philippines has always had the prerogative to be involved in development. (READ: Cardinal Tagle elected head of global Catholic charities)

Briones talked about the problem of education and employment for women, political participation of women, and how the civil code does not treat women as equal citizens. Briones also brought up the limitations of the civil code on same-sex marriage. Briones also warned of the challenge the country faces on underspending. “We keep on adding and adding money but we don’t improve government procedures, structures, rules, which still continue under the old ways of doing things,” Briones said. (READ: SONA 2015: Aquino gov’t continues to underspend)

Chief Finance Officer and Finance Group head of the Ayala Corporation, Jose Teodoro Limcaoco represented the private sector. He agreed with de Dios and Briones, saying universities in the country are excellent at educating but leave much to be desired in terms of research and development.

President of Youth Lead Philippines Metodio Maraguinot Jr. told the delegation the youth should be treated as partners in the process of development. “Rizal said the youth are the future. I say we are also the present,” Maraguinot said.

After talking about the the government’s achievements in expanding fiscal space without increasing tax burdens, Budget Secretary Florencio Abad proposed his own, more concise version of the SDGs.

Lead Convenor of the National-Anti Poverty Commission (NAPC) Joel Rocamora, on the other hand, said there is still much work to be done as far as eradicating poverty goes and it’s important to constantly debate on the meaning of “inclusive growth.” 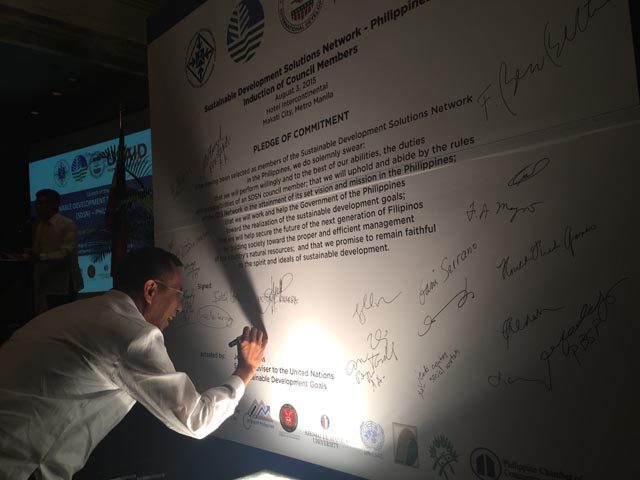 After the lectures concluded, the SDSN was formally launched with members signing an oath of commitment.

The following are the SDSN-Philippines Council members who signed:

As membership to the SDSN is open, a number of attendees also signed the pledge of commitment to the SDGs. – Rappler.com