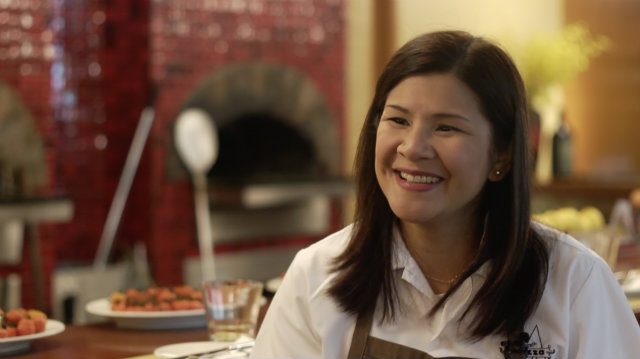 SINGAPORE – “Oh my God. I forgot the yeast!”

Chef Karla Mendoza was in a panic in the early days of Pizzeria Mozza at the iconic Marina Bay Sands. Doing overnight shifts for the restaurant’s 3-day pizza dough-making process, she dozed off, and woke up thinking she skipped a step.

“It turns out I was dreaming. Someone had to calm me down. It’s the stuff of nightmares to forget the steps in bread baking but thankfully enough, we have never done that.”

Mendoza is known not just for her meticulousness but also for being the Filipino executive chef of Mario Batali‘s first venture in Asia. From the celebrity chef’s celebrated restaurant in Los Angeles, she moved to the city-state in 2009 to open the branch from scratch. The pressure was on, with a different clientele used to a cuisine that is either spicy or sweet.

Six years later, Mozza’s reservations are full, and the waiting lines long. It is one of Batali’s most prolific restaurants, a success Mendoza attributes partly to a staff that is 80% Filipino.

“Filipinos are a huge, integral part of why Pizzeria Mozza in Singapore is such a hit,” she told Rappler. “It’s very much a natural trade for Filipinos to be hospitable, serving, welcoming. Someone asked me how you say ‘hello’ in Filipino. I say: ‘Kumain ka na ba? (Have you eaten?)'”

Mendoza’s staff, and managers at the Sands are part of the 157,000-strong Filipino workforce in Singapore. In this fast-paced cosmopolitan city, they said they get to compete with the best, meet global standards, learn diverse cultures, and yes, enjoy the food, too. 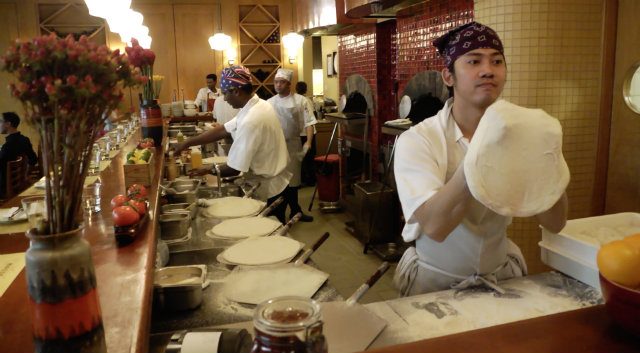 The profile of Filipino workers in Singapore has gone beyond the stereotypical maid Leticia Bongnino in a local TV sketch show.

To many Filipinos, the food and beverage sector is home. Mendoza said her young Filipino servers and cooks thrive in Singapore’s competitive environment. They cater to customers from Australia to the Middle East, and the frequent Filipinos on long weekend.

“We’re not just known regionally. We’re known worldwide. So for some of them, it’s exciting. It’s daunting. It’s at the same time frustrating because our expectations are quite high but in fact, they surpass it. Definitely, the skill sets are different. We’re go, go, go! Just keep going,” said one of Singapore’s few female executive chefs.

In her case, it took a newspaper classified ad to get her to leave her job at a Manila hotel. Nine years later, she works at a 5-star resort where she jokes about being a veteran of all types of concerns and complaints.

“My exposure here in Singapore helped me a lot in dealing with guests from all walks of life, from people from all over the world. When I was working in Manila, it was different because you were working with Filipinos as well so even the procedures were different. It’s more of the exposure, overall. It really helped me upgrade myself,” Barrientos told Rappler.

As with other Filipino communities worldwide, food is the form of bonding.

To the homesick, there is Gerry’s Grill for get-togethers over seafood. The runaway favorite is Jollibee at Lucky Plaza, an old-fashioned mall that became a Filipino enclave complete with remittance centers and turon. ‘Best of both worlds’

One of the mall’s tenants is Luz Campos Mesenas, general manager of the award-winning magazine OFW Pinoy Star. Married to a Singaporean, She decided to settle down in the Lion City 15 years ago, after two decades in Kuwait and Dubai. (READ: #SG50: Crowdsourced list: Filipino trailblazers you should know)

“Appointments are on time. There is honestly, cleanliness. There is no corruption. I said: this is the country where I want my children to grow up.”

Still, life in Singapore entails adjustments. One thing Mesenas quickly learned are the so-called OB or “out of bounds” markers for the conservative society.

“Singapore is very sensitive when it comes to race and religion. You have to consider this. You don’t just open your mouth and say bad things about religion, other cultures, their race or commenting on food or the smell, or even making a gesture,” she said.

“Here, it cannot be, ‘Bahala na. I will travel to Europe and America and be a TNT (undocumented worker).’ This is a very different country. This is full of rules and regulations.”

Mesenas described Singaporeans as “so serious” and “not open.” But after years of marriage, she influenced her husband to celebrate every birthday and baptism, and sing the karaoke.

To chef Mendoza, Singapore is “the best of both worlds.” Having worked in the US for years, she is now just a 4-hour flight from home but still gets to enjoy excellent public services.

“Everything works here. If they tell you to pick it up in 5 minutes, in 4 minutes it’s done. They give you an extra minute so no one says it did not work. Transportation is efficient. There’s barely any traffic – that I really like. That means the productivity is higher. If my staff leaves here at 4:30, they’re home by 4:45. So they’re not tired from the commute,” she said.

The challenge, Mendoza said, is more of “mental toughness.” At first, she considered changing Mozza’s menu when local customers complained that her pizzas and anti-pasti had “too much flavor.”

With the Marina Bay Sands right smack at the celebrations for Singapore’s golden jubilee, the festivities made Mendoza and her staff reflect on patriotism.

“All the money they put into all these celebrations, millions of dollars of all these practices, 5 days of celebration, they have the budget and we probably should put the money someplace else. But I think they’ve instilled this pride in being Singaporean.” Even after spending years in Singapore, the Filipinos are still updated about developments back home.

They are hopeful about the Philippines’ economic growth but also wary about the 2016 presidential elections.

Barrientos is a permanent resident who chose not to apply for Singaporean citizenship. She said even her Singaporean friends who bought property in the Philippines are concerned about the polls.

“They can see the Philippines progressing but you will hear one candidate is this and that. Given the track record of this person, what will happen to the Philippines? It also worries us Filipinos because our families are back home. Majority of us still think of returning home. We do not want to abandon the motherland,” she said.

Mendoza said her boss and mentor also sees potential in the Philippines. An American chef and media personality, Batali is working on opening a Mozza branch in Manila soon.

“He’s been to the Philippines twice, loves lechon, loves to eat in general. When he was here, he was approached by so many Filipinos who want to partner up with him, and bring him to Manila. So he knows there’s a demand. Manila is as they say, we’re a rising tiger now. So aside from sharing the hospitality, there’s a very good business opportunity,” she said.

The executive chef thinks what Philippine President Benigno Aquino III said is feasible: that the Philippines can be a first-world nation in a generation if reforms continue.

There are, after all, many ingredients from the Singapore story. (READ: #SG50: ‘Philippines can succeed like Singapore’)

“I think it’s more attitude. They had a plan, and they really ticked it off, done, done, done. We really need to aim higher,” Mendoza said.

The detail-obsessed chef in this perfectionist country said: “Okay lang is not okay. Puwede na iyan is not puwede na (To say that will do will not do. To say it’s acceptable is not acceptable).” – Rappler.com