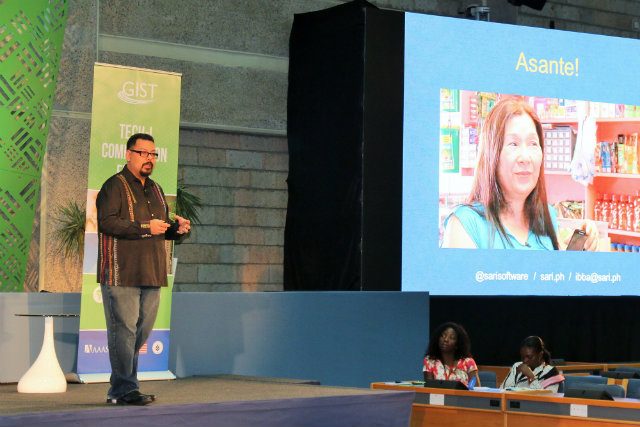 MANILA, Philippines – Financial literacy and more efficient store management for sari-sari store owners. This is the solution that software SariScan wants to provide for thousands of Filipino entrepreneurs. The app called “SariScan” won the hearts of the jurors during the Global Entrepreneur Summit in Nairobi, Kenya last July 25-26, 2015.

Speaking before an audience of start-up owners, tech experts and thinkers, Ibrahim Bernardo, CEO of the three-year old start-up Sari Software Solutions highlighted the importance of designing a tool built for the needs of microentrepreneurs, not just in the Philippines, but all over the world.

Through the app, sari-sari store owners can:

Bernardo’s pitch convinced the jurors with Sari Software winning the Best in Information and Communications Technology award from out of 792 candidates from 74 countries. As a representative of the Philippines and the lone awardee from Southeast Asia, Sari participated at the Global Innovation through Science and Technology (GIST) Tech-I competition.

Now on its sixth year, the Global Entrepreneur Summit is an international gathering of entrepreneurs, start-ups executives, and Silicon Valley luminaries. It was launched by US President Barack Obama in 2009 as an annual venue for bringing entrepreneurs and investors from around the world to exchange ideas, showcase projects, share expertise, and network with each other. During the event, startups were given the chance to show how they could solve local and global problems.

President Obama, in his keynote speech at the GES, said that the participants are the embodiment of “the spirit of entrepreneurship, the idea that there are no limits to the human imagination; that ingenuity can overcome what is and create what needs to be.” He further added that the GES has helped “empower hundreds of thousands of entrepreneurs, giving them a boost to launch thousands of new businesses and initiatives.” – Rappler.com