Aug 13, 2015 11:12 AM PHT
Karlos Manlupig
Facebook Twitter Copy URL
Copied
'I therefore consider that the AFP statement...in its news release of 7 August that the Lumads in Davao City are victims of human trafficking is incorrect, unacceptable, and represents a gross distortion of my views on this issue' 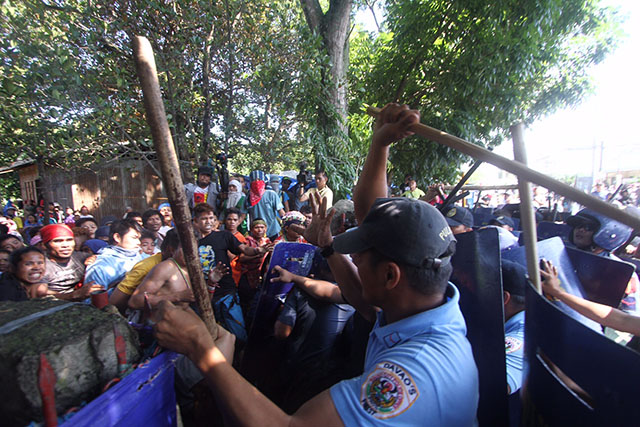 DAVAO CITY, Philippines – The United Nations Special Rapporteur on the human rights of internally displaced persons rebuked the Armed Forces of the Philippines (AFP) for misrepresenting his comments in a military press statement against hundreds of displaced Lumads and their support groups.

Chaloka Beyani, in a statement sent to the media on August 13, said that he was misquoted by the AFP’s Eastern Mindanao Command when it claimed that he commented the displaced Manobos were victims of “human trafficking.”

In a strongly worded statement, Beyani clarified: “Let me be absolutely clear, the indigenous persons in Davao are not victims of human trafficking. I was explicit in my discussions with the senior AFP representatives on multiple occasions, and indeed at my press conference that the indigenous persons concerned should under no circumstances be considered to fall into the category of trafficked persons,” Beyani stressed explaining that the Lumads voluntarily left their homes and can move freely around and even outside the facility.”

“I therefore consider that the AFP statement by the Eastern Mindanao Command (Eastmincom) in its news release of 7 August that the lumads (Indigenous People) in Davao City are victims of human trafficking is incorrect, unacceptable, and represents a gross distortion of my views on this issue,” he stressed.

The Special Rapporteur shared that the military informed him of their assessment that the Lumads were trafficked by their support groups and are being illegally detained inside the evacuation center.

In his 10-day visit to the Philippines, Chaloka Beyani went to the evacuation center of more than 700 displaced Lumads at the compound of the United Church of Christ in the Philippines (UCCP) in Davao City last July 26 to directly talk with the affected residents whom the military and North Cotabato 2nd District Representative Nancy Catamco claimed are being held illegally by support groups.

Last July 23, at least 500 government agents and police forces in anti-riot gear, allegedly under the instigation of Catamco and military officials, attempted to barge inside the evacuation center to “rescue” to the displaced residents and forcibly bring them back to their villages.

The event resulted to violence after the police forcibly opened the gates of the center and stormed in with their truncheons and shields, which left at least 17 Lumads and 2 cops injured.

The Lumads are staying at the church compound since May after the military and a paramilitary group called Alamara reportedly launched a massive anti-communist witch-hunt in their villages, which resulted to harassments, indiscriminate firing and occupation of civilian houses and schools.

In a press statement, the military said that in a briefing with the security sector in Camp Aguinaldo, Beyani allegedly shared his views that the military and police are not responsible for what have happened and that the Lumad evacuees are being manipulated by their support groups.

“When we asked them about the circumstances in which they left their areas, they say they were at risk of forced recruitment into Alamara and the movements in that area was in protest in relation to the  presence of Alamara, so they wanted to make a point that that was what happened. But I have been there for some time, I think they got manipulated,” the military said in a press statement, supposedly quoting Beyani.

However, Beyani clarified that he did not in any way mean it the way the military is presenting it and that the term “manipulated” was used to describe how government forces tried to forcibly bring them back to their villages.

“The indigenous peoples whom I interviewed informed me that they relocated to this facility freely and in response to the militarization of their lands and territories and forced recruitment into paramilitary groups operating under the auspices of the AFP. My reference to their being ‘manipulated’ related to the attempt to forcibly move them out of the UCCP facility without proper and adequate consultation with them,” Beyani said. (READ: Lumad evacuees, activists clash with cops in Davao)

After the violent incident last July 23, the military, police and Catamco vowed that they will still try to enter the evacuation center to “rescue” the Lumads and bring them back to their communities.

Fearing further escalation of tension, Beyani said the issue can only be resolved peacefully through full consultation with the Lumads and their legitimate tribal leaders.

“At the end of my visit on 31 July, I called for a peaceful resolution of the situation in full consultation with the indigenous peoples concerned and their legitimate leaders. It is essential to avoid any form of manipulation of their situation by any party, governmental or non-governmental. The human rights, security and wishes of the indigenous peoples themselves must be the highest priority. No attempts should be made to forcibly remove the people from the UCCP facility,” Beyani said.

Without addressing their legitimate concerns particularly the threat to their security posed by the military and Alamara and the lack of government services, Beyani said that the Lumad evacuees may not feel safe to return to their villages.

“The community wishes to return to its lands but stressed to me that they will only feel safe to do so if the long-term militarization of their region comes to an end and they can return with guarantees of safety, dignity and protection,” Beyani said.

“They described to me their concerns including their alleged forced recruitment into paramilitary groups, known as Alamara, under the auspices of the AFP and harassment in the context of the on-going conflict between the AFP and the NPA. Schools have reportedly been closed and/or occupied by the AFP or Alamara, hampering the access to education of indigenous children,” he added.

Beyani reiterated his appeal to the government to focus its efforts in addressing the cause of the displacement of the Lumads.

“I urged the Government, in consultation with indigenous peoples themselves, to give greater attention to addressing the causes of displacement whether it be due to the militarization of their areas or due to development projects,” Beyani said. – Rappler.com